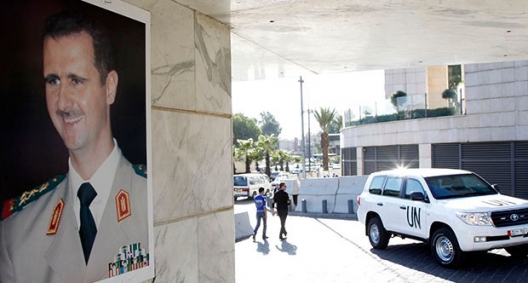 The US and its allies must address their Syria policies to the humanitarian catastrophe of millions of Syrians uprooted or brutalized by the civil war there – and must do it for reasons of realpolitik as well as humanitarianism, according to Atlantic Council Senior Fellow Frederic Hof, a former State Department advisor on Syria.

As the international community prepares to gather Syria’s civil war combatants January 22 for talks aimed at ending the war, the best hope of prompting President Bashar Assad to consider political compromise is in first requiring him to let UN humanitarian agencies work throughout the country, Hof writes this week in an essay for the Council. The UN should postpone next week’s conference, called Geneva II, until Assad provides that access. This would constrain an Assad military response that, Hof writes, has become “an ever-escalating assault on civilian populations.”

Secretary of State John Kerry has spoken on the Syrian conflict and its civilian victims with “coherent and even soaring” rhetoric, according to Hof, but US policy now is overlooking an “unvarnished truth” that Kerry expressed soon after taking office nearly a year ago. That is, writes Hof, that “Assad’s calculation would have to be changed before the head of Syria’s criminal clan would take negotiated political transition seriously.”

The prospect of US military strikes to change Assad’s calculus was set aside in Washington’s agreement in September to abstain from armed action in exchange for the removal of Assad’s chemical weapons.

“Assad took this to mean he was free to use his Russian-supplied weaponry as he wished, provided he refrained from using chemical munitions,” Hof says.

“Ideally Geneva II would commence on January 22 with a humanitarian truce substantially in place: one characterized by full United Nations access to all parts of Syria,” according to Hof. If Assad’s main backers, Iran and Russia, “cannot oblige their client to do the minimally decent thing, why should they be expected to do anything useful in the context of Geneva II’s mission: political transition?

“The entirety of the American diplomatic effort needs to be focused on what has become easily the most catastrophic humanitarian disaster of the 21st century,” Hof told National Public Radio’s Morning Edition on January 15. “You’re seeing genocidal effects being produced on the ground: this terrible daily bombing, strafing, shelling by the Assad regime of populated areas — densely populated areas — in the hope that they may catch a few rebel fighters. This is what’s driving this humanitarian catastrophe and the international community just hasn’t come up with an answer to it yet.”

Image: A U.N. vehicle is seen near a photo of Syrian President Bashar al-Assad at the entrance of a hotel where a team of experts from the Organisation for the Prohibition of Chemical Weapons (OPCW) are staying in Damascus October 8, 2013. The global chemical weapons watchdog said on Tuesday it would send more inspectors to Syria to help destroy Assad's stockpile of toxic munitions. REUTERS/Khaled al-Hariri