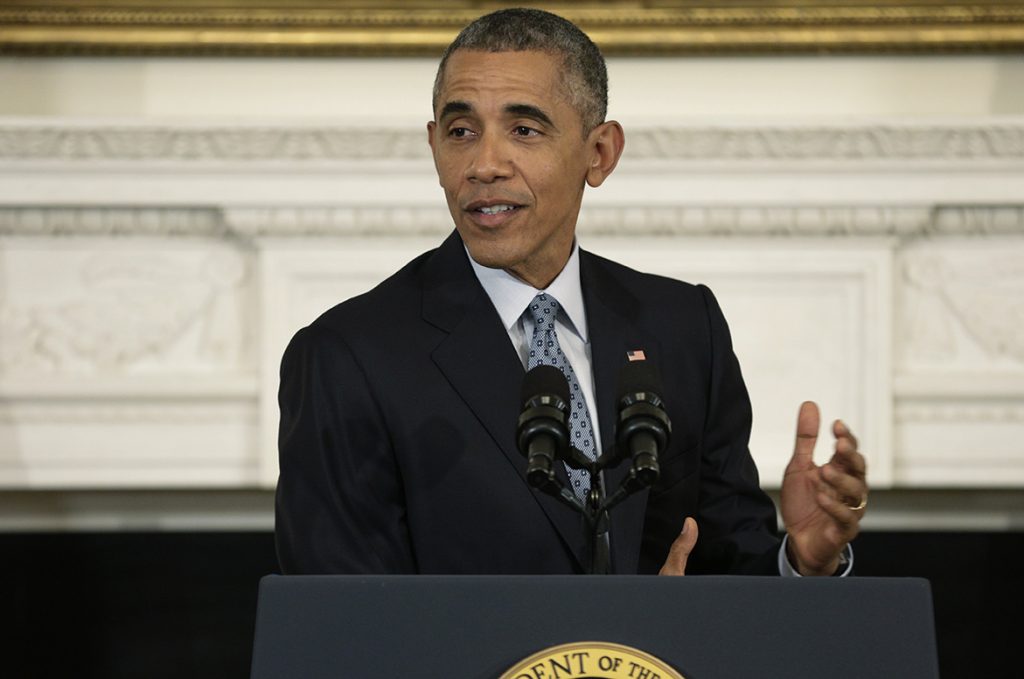 The Trans-Pacific Partnership “reflects America’s values and gives our workers the fair shot at success they deserve,” said US President Barack Obama. The historic trade-liberalizing deal was reached between the United States and its eleven negotiating partners on October 5. (Reuters/Joshua Roberts)

The United States and eleven other Pacific Rim countries on October 5 reached an agreement on the largest-ever regional trade accord in history.

US President Barack Obama said the deal, known as the Trans-Pacific Partnership (TPP), “reflects America’s values and gives our workers the fair shot at success they deserve.”

Critics of the deal include Sen. Bernie Sanders (D-VT) and Donald Trump, presidential candidates for the Democratic and Republican parties, respectively. They say the TPP will cost American jobs.

The TPP is as much about China as it is about trade liberalization.

“When more than 95 percent of our potential customers live outside our borders, we can’t let countries like China write the rules of the global economy. We should write those rules, opening new markets to American products while setting high standards for protecting workers and preserving our environment,” Obama said.

Atlantic Council analysts Andrea Montanino, Director of the Global Business and Economics program, and Jason Marczak, Deputy Director of the Adrienne Arsht Latin America Center, discussed the importance of the TPP and road ahead in an interview with the New Atlanticist’s Ashish Kumar Sen. Here are excerpts from our interview.

Q: What has been agreed to in the TPP pact reached today by the United States and eleven other Pacific Rim countries?

Marczak: The TPP agreement that was finalized in Atlanta is a culmination of years of negotiations. It was held up by a few issues. These issues, which were negotiated around the clock over the weekend, include rules of origin for auto parts—the percentage of auto parts in a final product that need to be made in the TPP countries. This was a big issue for the Mexicans and the Canadians. Another issue was opening up dairy market access, which was a big issue for New Zealand. And the last issue was biologics. The United States has been pushing for a continuation of the twelve-year period in which pharmaceuticals have exclusive rights over a biological patent. As per the agreement, that timeframe has now been reduced.

Q: To what extent is the TPP about checking China’s growing economic influence?

Montanino: At the end of the day, China has a lot to do with this deal. China has a high volume of trade with its neighbors. The TPP can bring those countries more under the influence of Japan and the United States. It may also raise the standards of producing goods in countries such as Malaysia and Vietnam, affecting trade with China. These countries very often make goods for the Chinese markets, or goods that are reassembled by Chinese companies. If standards are raised for those countries that are within the TPP it can have an impact on trade with China and that might mean China will have more difficulty in getting supplies for manufacturing.

If Asia Pacific countries’ trade moves more toward the United States; if the US, Canadian, and Mexican markets open up more that again can have an impact on China’s influence on the countries in the Asia Pacific.

We have to see how China will react to this deal—whether it will try to be incorporated in some way or start to fight.

Marczak: The agreement is certainly about the US pivot to Asia, but it is about more than just China. It is about putting the United States and its eleven other negotiating partners in the driver’s seat of writing the global trade rules.

It is also about putting concrete action into the US strategy to have a broader pivot to Asia. Trade deals, historically, are about economics, but they are also about strategic significance. The TPP cements important US partnerships with not only critical Asian partners, but also critical Latin American partners.

The United States already has trade deals with six of the eleven negotiating partners. So the question is, how do we update the trade deals that we already have?

The TPP should not be seen as an anti-China deal. This is a deal to bring together likeminded countries that share similar values on how to achieve commercial linkages that will benefit their populations. But China will need to catch up to the new trade realities written into TPP. China should continue to be consulted as the TPP moves forward with the hope that the regulations and the rules that are written in the TPP will eventually be adopted by China as well.

Q: Andrea, do you see the TPP forcing China to raise its standards?

Montanino: I think this will happen sooner or later. It’s a long road, but I think China will be forced to speed up the process of raising standards because of this deal. That process is already underway in China because it has a growing middle class, so for their own consumers they have to produce better and better goods.

Q: Does the TPP leave the door open for China? Do you see a TPP that includes China somewhere down the road?

Montanino: I don’t see this in the short to medium term. There are too many differences still so it will be a work of years.

Of course, it will depend on the willingness of the US administration and the Japanese to push for this. Once the Chinese have better standards they can be in a position to start negotiating. Now will be too disruptive for the Chinese economy to adapt to the new standards of the TPP.

Q: Jason, this deal is not just about the pivot to Asia, it is also about Latin America.

Marczak: There are three Latin American countries—Mexico, Peru, and Chile—all of which we already have trade agreements with the United States and are part of the TPP deal. This is critical for these three countries’ overall strategy toward Asia.

The TPP is something other Latin American countries will eventually try to join; Colombia being top among them, but Costa Rica and Panama are also ripe for joining the TPP once the agreement is ratified.

The TPP brings all the benefits of becoming a forcing mechanism for countries to adopt tougher labor and environmental standards. It will also bring convergence among the web of rules of origin agreements currently in place. This will allow current trade partners, especially small businesses in these countries without large legal teams, to finally take advantage of the opportunities in trade agreements.  Latin America is the United States’ fastest-growing trading partner in the world. The TPP is an opportunity to further solidify the commercial and strategic bonds between the United States and many countries in the region.

Q: What are the implications of TPP’s passage for the ongoing Transatlantic Trade and Investment Partnership (TTIP) negotiations?

Montanino: Negotiations on the TTIP agreement between the United States and the European Union are lagging behind. It is important now for the Europeans not to remain behind. Once you have this big agreement, the TPP, living outside Europe it would be a problem for the Europeans.

The TPP provides more urgency for the Europeans to look for an agreement (on the TTIP). With the TPP you cover 40 percent of the world’s GDP. If, with the TTIP, you are able to add Europe you will have 60 percent of the world’s GDP under two big trade agreements and the United States will be at the core of both. It is important for the United States, but it is also important for Europe to be part of the TTIP.

Q: Congress must now ratify the agreement. What is the likelihood of this getting done on President Obama’s watch given that we are now in an election year?

Marczak: The Trade Promotion Authority legislation lays out a clear timeline in which the agreement’s text needs to be made public and in which Congress must begin to deliberate the agreement. Ninety days before the agreement can even be signed, the administration has to give notification to Congress.

Before the primaries there is the risk that Democrats who support the bill could be open to a tough primary challenge from a more left-leaning candidate against the deal. At the same time, Republicans who might be inclined to vote for the deal have to be worried about a challenger coming from the far right who would criticize them for voting for a piece of legislation that is one of President Obama’s landmark achievements. That would potentially be a reason to wait until after the primary season. The problem in waiting is that the TPP then becomes even more a part of the presidential campaign. But look around, it already very much a part of the election campaign.

Q: Critics of the deal say it favors big business over labor and environmental protection. Both Donald Trump and Bernie Sanders have criticized the deal. Hillary Clinton has yet to come out in support. Do the critics have a point?

Marczak: No trade agreement is ever perfect. There are going to be winners and losers as there are with any other trade agreement. But when you look at the net benefits for the US economy and the strategic importance of solidifying relationships with important partners at a point of such global turbulence it will outweigh the concerns about any negative repercussions of the deal.

Separate side agreements have been signed with three countries, including Vietnam,  which is one of the top concerns so far as labor rights infringement. If there is a lack of adherence to the labor rights agreed to in the TPP there is a mechanism in place through which the tariff barriers can be reintroduced with the country that is seen to be in violation as punishment for not adhering to the overall standards of the agreement.

In the end, trade is an incredibly divisive subject. There is a lot of rightful anxiety and concern about any trade agreement that is going to reshape global commercial relationships. But this is a net win.

On the left, there is a desire to appeal to the unions that have never been supportive of free trade. On the Republican side, this is a signature achievement of President Obama and the Republican presidential candidates will take any opportunity they can to criticize this President. Donald Trump should know better as a businessman the importance of free trade for the economy.