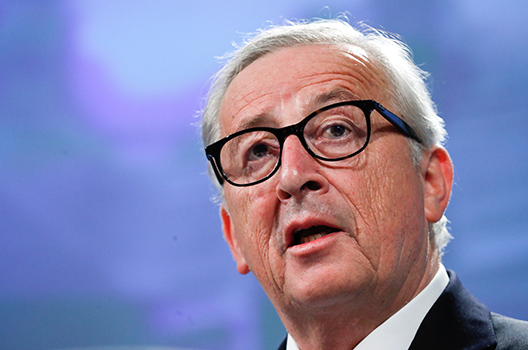 US President Donald J. Trump and European Commission President Jean-Claude Juncker are expected to discuss ways to defuse the trade war between the United States and the European Union (EU) when they meet at the White House on July 25. This escalating situation, which also involves China, has brought increased attention to trade in goods, at the expense of trade in services, which account for three quarters of US gross domestic product (GDP) and four out of five jobs in the United States.  Consequently, a policy that is focused on trade in goods misses not only the largest sector of the US economy, but also the United States’ prowess in providing services to international partners and the enormous potential for US service providers if allowed access to additional markets. The Trump administration should be working hard to expand markets for US services and to conclude and strengthen new agreements that encompass services trade.

Dubbed “The Most Important Free Trade Agreement You’ve Never Heard Of,” the Trade in Services Agreement (TiSA) is the first plurilateral trade deal in twenty years to explicitly focus on updating the international standard for trade in services—the only other being the World Trade Organization’s (WTO) General Agreement on Trade in Services (GATS) in 1995. TiSA aims to liberalize trade in services, which currently face a plethora of barriers, such as technical standards, licensing, permits, and qualification requirements. Negotiations between twenty-three economies (encompassing roughly 70 percent of global trade in services) began in 2013 but have since stalled, due to uncertainty around the United States’ position.

Importantly, TiSA concerns an increasingly critical part of the global economy: services constitute upwards of 60 percent of modern domestic economies, with the three top exporters being the United States, the EU, and the United Kingdom. The share of services in total world exports has increased from around 9 percent in 1970 to more than 20 percent currently.

If trade is to be a driver of economic growth and stability in the years ahead, proponents should focus on areas where there is much more to gain, and specifically on trade in services rather than goods. Given the Trump administration’s preference for bilateral trade deals over multilateral ones, TiSA’s chances of completion are currently limited at best. However, its potential and importance remains large. Thus, it is crucial to evaluate TiSA’s goals, implications, and future.

What is trade in services?

Broadly, services refer to “the sale and delivery of intangible product[s],” such as transportation, legal counsel, and financial products. They encompass an immense breadth of economic activities and participants, filling a variety of roles in national and global value chains, from assembly to e-commerce to human resources. The unique and intangible nature of services renders their trade equally complex.  Rapid progress in information and communications technologies (ICT) serves as a significant driver of expanding services trade by facilitating international transfers of various services with increased ease and speed.

The WTO has defined four “modes” or classifications of deliveries of service:

Mode 1: Cross-border supply: The service is supplied from one country to another and both the supplier and consumer remain in their respective countries. For example, call centers providing customer service to customers abroad.

Mode 2: Consumption abroad: The consumer physically travels to another country to obtain the service. For example, tourism or medical tourism.

Mode 4: Temporary presence of natural persons: Individual suppliers travel temporarily to another country to supply services. For example, an IT consultant, an engineer or an architect travels to a company in another country to perform a short-term project.

These classifications allow the broad umbrella of services to be divided into different categories with specific sets of regulatory challenges.

Trade in services is largely regulated by national or sub-national governments through non-tariff barriers (NTBs) in the form of government regulations like labor or professional certifications, environmental standards, or privacy laws. All limit the capacity of providers to deliver services internationally. For example, if two countries have different licensing requirements for doctors, then a doctor from one country could not freely move to and practice in the other. Fully liberalizing trade by reducing NTBs implies establishing common, harmonized, or mutually recognized standards of service. These reduce inefficiencies, while providing quality assurances.

Presently, GATS is the only multilateral framework codifying trade in services among all 164 WTO members. Its basic principles reflect that of its companion, the General Agreement on Tariffs and Trade (GATT). GATS adopts the concept of most-favored-nation (MFN) treatment, which means that countries cannot discriminate among WTO members; for example, the United States cannot burden Canadian shippers more than British shippers providing the same service. It also requires transparency, or that states publish all measures of regulations and establish impartial inquiry points for questions. Specific commitments to GATS include market access, in that states must uphold negotiated agreements on agreed-upon sectors with other states; and national treatment, in that states must not discriminate against foreign suppliers to benefit domestic suppliers in sectors identified in the agreement.

While GATS has been particularly useful in providing a foundation for future trade in services agreements—TiSA included—it has not been updated to reflect new developments over the past twenty plus years. Efforts to update the GATS framework during the ambitious Doha Development Agenda, or Doha Round, have stalled alongside the broader Doha Round negotiations. Member states instead have chosen to pursue bilateral or regional free trade agreements instead.

Consequently, GATS fails to address a variety of issues raised by the widespread proliferation of ICT innovations that have expanded the ability to provide services remotely across borders. It fails to address new concerns such as data geolocalization, mobile payments, and privacy protection. Its application to the financial services sector also raises difficult questions about the intersection of prudential regulation and free trade frameworks. This creates significant challenges for domestic governments and places pressure on global trading rules to adapt.

TiSA: Why is it important and what is its future?

Following the collapse of the Doha Round of WTO negotiations, in April 2013, TiSA negotiations officially began when a sub-group of WTO members who called themselves the “Really Good Friends,” including the EU, the United States, Canada, Mexico, and Japan initiated talks to build on the GATS negotiations under a different name and strategy. According to position papers released by the EU, TiSA adopts the GATS framework and definitions but applies a “sectional” approach to decision-making whereby each negotiator can propose a new section to the draft.

TiSA negotiations involve twenty-three WTO members—including twelve of the G20 countries—which together account for more than 70 percent of the world’s trade in services. However, this group does not include major emerging markets such as China, Brazil, or India, which are net importers of services.

After twenty-one rounds of negotiations, the most recent one concluding in late 2016, the agreement, if talks can restart, would likely contain four parts:

1) a core text that builds on key provisions of GATS and is horizontally applied to all parts of the agreement;

4) institutional provisions that set rules for how TiSA would function, expand, or be amended.

An EU report indicates that the agreement will also include at least seven proposed sectoral annexes which would create a trade-based regulatory structure for the following sectors:

·transport (land and air only),

Liberalization in these sectors would expand cross-border market access for foreign and domestic providers on a more equal footing.  It would also create a more open and predictable environment for foreign direct investment by creating comparable regulatory standards in those sectors pursuant to treaty requirements.

Proponents of the agreement focus on highlighting its positive results. The European Commission estimates that TiSA could lower service trade costs by as much as 3.4 percent in Organisation for Economic Co-operation and Development (OECD) countries and 5.8 percent in low- and middle-income countries. More broadly, this liberalization would promote greater domestic competition, benefitting consumers.  International standardization (if agreed) would likely promote better standards and best practices. A high degree of commitment in the new treaty would also generate significant benefits to treaty counterparties, including leveling the playing field for service providers and opening many new market opportunities.

Nevertheless, critics claim that the treaty would do more harm than good by driving wages down through increased competition. Some fear that increased market access and competition would also undermine public services and accelerate privatization.  Consistent with other critics of traditional trade agreements, some TiSA skeptics also assert that treaty requirements would restrict government authority, bounding democratic sovereignty with unamendable standards. TiSA critics share with broader free trade critics a concern over related dispute resolution mechanisms that they assert undermine domestic courts. Others worry about “in-shoring,” or the increase of foreign individuals temporarily being brought into a country who do not have to be protected in the same manner as domestic citizens.

Finalizing TiSA will be an uphill battle. Five years have passed since the beginning of negotiations, with minimal progress since 2016. The policy and political climate is not favorable to a trade liberalization agenda generally. The United States, the EU, and others are currently engaged in escalating trade conflicts, propelled forward by domestic populist movements.

However, it is possible that economic trends may create a more favorable foundation for a trade in services framework. As noted, a broad cross-section of developed economies currently enjoys trade surpluses as net exporters of services to the rest of the world. In addition, China continues to make strong strides in expanding market penetration and presence around the world, including services provision. If the leading global net exporters of services can agree on solid standards, they can create a foundation for reliable best practices, norms and standards in the services sector which will create a level playing field in these strategically significant sectors as they continue to grow and as more countries (such as China) begin to increase their own services exports.

In the midst of current deteriorating trade relations among Western economies, the possibility of reenergizing TiSA negotiations would represent a leap forward.  Not only could it foster freer services trade via a more level playing field, but TiSA could provide a creative way to help reframe hostilities in trade in goods and find a way out of the current dead end. Overall, a successful TiSA would make clear the benefits of greater global commerce at home and abroad by promoting additional growth and prosperity.

Cecilia Pan is an intern with the Global Business & Economics Program.