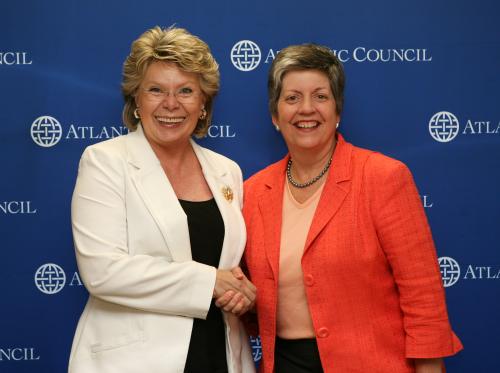 With a refreshing candor almost never seen from sitting officials, DHS Secretary Janet Napolitano and European VP for Justice Viviane Reding vowed to work together to share data on terrorism and criminal investigations while safeguarding privacy of citizens on both sides of the Atlantic.  Despite the can-do attitude, they made it clear that the U.S. and EU have very different attitudes on the subject.

Before a standing room only crowd at the Atlantic Council, Napolitano opened her remarks by praising the EU for that morning’s passage of legislation restoring the Terrorist Financing Tracking Program (TFTP) and noting three decades of information sharing between the U.S. and Europe.   But she also made it quite clear that we need to "move forward" toward more cooperation on these matters rather than waste time haggling over trivial details.   Indeed, TFTP was a longstanding agreement that was scuttled in February over what Reding admits were nothing more than intra-EU turf battles.

Napolitano argued that we need new policies to cope with new threat and that there is a strong need to cooperate on matters like personal name records (PNR) and advanced imaging technology (AIT).  In many cases, there has been cooperation between the United States and various European counterparts on a bilateral basis and Napolitano did not do much to hide her frustration at having to start anew to get them through the EU Parliament without significantly advancing the ball.

For her part, Reding was effusive in vowing that the transatlantic partnership was built on "shared values" and that, however hard it might be to get through the various political hurdles on these issues, "We will get it done!"  She enthused that, in the past there had been too much talk and too little action and that it was time to reverse this.  She joked that the presence of so many women in critical decision-making roles would make it easier.

But, despite her pledges, she repeatedly pointed to the very real obstacle in the way of cooperation:  Article 8 of the Charter of Fundamental Rights of the European Union, which went in force with the Lisbon Treaty, which very specifically guarantees a right to personal data protection. This, Reding matter of factly observed, was "our compass for all decisions" on the matter.

While Napolitano rightly noted that the United States has a long tradition of insisting on personal privacy — and is in some ways, such as a cultural antipathy to national identification cards and showing passports at hotel check-ins and the like, even more privacy conscious than Europe— the fact of the matter is that protection of personal data does not rise to the level of fundamental right in our society. (The Supreme Court famously discovered a right to privacy hidden in the "emanations and penumbras" of other rights in the 1960s, but its application has been decidedly limited.)

What this means  is that, like it or not, the EU will drive the train on this issue.

Reding suggested a way forward that will make the best of the constraints:  An umbrella framework that addresses all of the major theoretical issues into which various technical agreements can then be plugged in.   Napolitano, demonstrating the impatience with red tape befitting a former state governor, seemed cool to the idea, seeing it as an impediment to "moving forward" on the issues.   Nor was she thrilled with the ideas of having to revisit such things as the U.S. Privacy Act with Congress in order to make tangentially related agreements with Europe. But given that negotiating the labyrinthine European political process will make bipartisanship in the U.S. Senate look easy, an accord on basis principles is going to be necessary.

Speaking yesterday at a different gathering about a different aspect of the transatlantic relationship, Bertelsmann Foundation executive director Annette Heuser observed that there are only three choices that can be made: "Love it, change it, or leave it." It applies equally to this case. Frustrating though it may be to deal with the EUP and the strictures of Article 8, we can’t change it. Given the importance of working together on these issues to both sides, neither can we leave it. And that means that we’ll have to love it. Or, at least, grit our teeth and bear it.