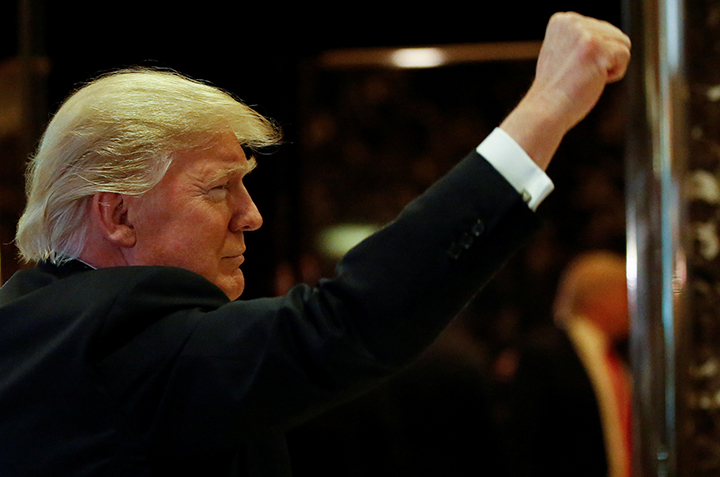 The transatlantic relationship is in for a rough ride over the course of Donald Trump’s presidency simply because there is no “correcting mechanism” among the incoming cabinet to counter the next US president’s rhetoric on the European Union, according to an Atlantic Council analyst.

In an interview with the Times of London and Germany’s Bild newspaper published on January 15, Trump bashed NATO as “obsolete,” described the European Union (EU) as “basically a vehicle for Germany,” applauded the United Kingdom’s decision to leave the EU, and predicted that more EU member states would follow. The comments rattled the United States’ European allies.

Trump’s key cabinet picks—secretary of state nominee former ExxonMobil Chief Executive Officer Rex Tillerson and defense secretary nominee retired Gen. James Mattis—broke with the president-elect and spoke favorably of NATO at their confirmation hearings earlier in January. However, the absence of a depth of EU expertise among Trump’s cabinet is striking, said Fran Burwell, a distinguished fellow at the Atlantic Council.

“They know about NATO or have had experience in NATO, but not regarding the EU. There is no correcting mechanism at the cabinet level that we see so far that would present a counterview to what Trump has said” about the EU, said Burwell.

“The EU itself is in for a rough ride over the next few years,” she predicted.

Trump’s comments have emboldened far-right populist leaders in Europe—particularly in Germany, France, and the Netherlands, which all have key leadership elections scheduled this year.

“I do think these types of statements encourage those such as [French far-right National Front leader] Marine Le Pen, who hope to do well in the French elections and, therefore, potentially lead a referendum on France leaving the EU,” said Burwell.

“The likelihood of such a referendum succeeding is very, very small,” she added.

Meanwhile, British Prime Minister Theresa May, in a major speech in London on January 17, outlined her government’s plans to leave the EU. The United Kingdom “cannot possibly” remain in the single market because staying would mean “not leaving the EU at all,” she said. However, she promised to push for the “freest possible trade” with the EU’s other twenty-seven members. By opting out of the single market, the United Kingdom will control immigration—free movement of people had been a key demand from Brussels for remaining in the single market.

May said Parliament would get to vote on the final deal agreed between the United Kingdom and the EU. The British government will invoke Article 50 of the Lisbon Treaty—which relates to an EU member state’s intention to leave the union—by the end of March.

“One other point that [May] has made very clear is that she wants Britain to have the capacity to make trade agreements with other countries outside the EU, such as the United States,” said Burwell. Trump, too, has spoken in favor of a US-UK trade agreement.

“That will be a challenge because until the British negotiation with the EU is concluded we won’t know what their arrangements are there and what they can negotiate with us,” Burwell added.

Q: What does not being part of the single market mean for the United Kingdom?

Burwell: It means that UK goods will not automatically meet the regulatory criteria. The single market is about the free movement of goods, people, money—it is making the European Union, in theory, like the United States in that goods and services travel around the country. If you work in one state you don’t have difficulties when you move to another state or you can do business in another state and you know that a product sold in another state meets the regulatory requirements in your state most of the time.

What Theresa May has said is that instead of having that—because she doesn’t want to be part of the rulemaking process in Brussels—Britain will have its own decision-making process unaffected by the others, but it hopes to achieve a trade agreement that would reduce tariffs and quotas and other obstacles with the EU.

May did mention the customs union. Its bureaucracy can add a lot of wait time at ports for goods and make it very difficult for small businesses. She is looking for something to reduce that burden.

One other point that she has made very clear is that she wants Britain to have the capacity to make trade agreements with other countries outside the EU, such as the United States. That is a crucial element about negotiations on what will be included in the end and what will not.

Q: Does the UK opting out of the single market have implications for the Transatlantic Trade and Investment Partnership (TTIP) negotiations between the European Union and the United States or did the mere fact of a Brexit already create those implications?

Burwell: TTIP is in question right now. That is in part because of Brexit, but it is also because of the stance of the incoming US administration. President-elect Trump has been very critical about trade agreements and I don’t think he will simply pick up the TTIP negotiations. There has also been a lot of resistance in some quarters in Europe, particularly in Germany, in the public. I think we will go through a phase on TTIP anywhere from a review and perhaps a relaunch and perhaps even a renaming. I think there is too much at stake economically for it to simply be passed by.

The president-elect, when campaigning, did not mention TTIP specifically and many of the things that he has criticized other trade agreements for don’t necessarily apply to TTIP because it is an agreement between two high-wage economies.

Brexit adds another element to this. Do we go forward with TTIP first and add the British as an associate member or do what [Trump] seems to be prioritizing—a US-UK bilateral agreement? That will be a challenge because until the British negotiation with the EU is concluded we won’t know what their arrangements are there and what they can negotiate with us.

Q: Other EU member states had linked single market access for the UK to the freedom of movement. By opting to drop out of the common market is the UK effectively taking a position on migration as well?

Burwell: Yes, it is. One of May’s top priorities has been to say that she has taken control of migration. It is a bit ironic because a lot of the migration into the UK comes from non-EU countries—particularly former Commonwealth countries. That has nothing to do with these negotiations with the EU.

What May’s decision to forego the single market in order to be able to control immigration does is it brings into sharper question the future of EU citizens currently living in the UK and UK citizens living in the EU. She mentioned getting an early deal to preserve the rights of those individuals who are already in place—but not necessarily future immigrants into the UK. Realistically, as a bargaining tactic I am not sure that the other twenty-seven [EU member states] will agree to that until they see the full scope of a potential deal with the UK.

Q: What are the likely implications of this position in Scotland, which voted overwhelmingly in the Brexit referendum to preserve its position in the EU?

Burwell: It will, for the short term, strengthen the Scottish Nationalists. They will have to wait to see what the deal actually is, but it does raise the chance of there being a second referendum on Scotland leaving the UK. We’re going to have to see how the Scottish economy does. It is very energy dependent and that is not necessarily a good place to be right now if you want to be an independent country. It is also unclear whether Scotland would have any special fast track to get into the EU should it leave the UK.

Q: What impact does Trump’s rhetoric on NATO being obsolete, praise for Brexit and predictions of other EU states leaving the EU, and criticism of German Chancellor Angela Merkel’s migration policy, in particular, have in Europe? Is it swaying the public one way or the other ahead of elections in Germany, France, and the Netherlands?

Burwell: It has already had a big impact in Europe in terms of the press and politicians’ reactions. We need to keep in mind that these are the statements from someone who is not yet in office. He has proven very malleable in his views, particularly on NATO being obsolete. His nominees for state and defense have taken different views in their confirmation hearings. We may be seeing someone who has a tendency to speak off the cuff and it may not reflect future policy.

I would distinguish that from Trump’s comments about the European Union, about Brexit being a good thing, and anticipating that there will be others who will leave [the EU] because I think there are few among his appointees so far who know much at all about the European Union or European politics. They know about NATO or have had experience in NATO, but not regarding the EU. There is no correcting mechanism at the cabinet level that we see so far that would present a counterview to what Trump has said. The EU itself is in for a rough ride over the next few years.

I do think these types of statements encourage those such as [French far-right National Party leader] Marine Le Pen, who hope to do well in the French elections and, therefore, potentially lead a referendum on France leaving the EU. The likelihood of such a referendum succeeding is very, very small. The British have always had a different perspective toward the EU than France, but [Trump’s rhetoric] does embolden those types of separatist forces.

Q: In the run-up to the elections in Germany, France, and the Netherlands we are seeing a spate of fake news and reports of Russian interference. What lessons can Europe draw from the United States’ recent experience in the elections?

Burwell: There are two things. One, be even more alert and put into place efforts to protect any data related to elections to prevent party headquarters and voter rolls from being hacked. In those countries that vote more electronically than we do there should be some kind of a paper backup.

Second, and we are already seeing this, be more alert in terms of identifying and trying to squash fake news. We have the interesting example of Facebook now trying to set up a mechanism by which members can identify a news item that has been passed along to them as inaccurate. It will be reviewed by Facebook news reviewers and if it is shared further it would go with a note saying this has been identified as inaccurate. We’re going to see a variety of systems like that pop up to prevent fake news from being passed along as though it was real news.

We do need to be careful because as we have seen in some of the president-elect’s statements, for example, news he disagrees with or finds unpleasant is termed fake news. That’s not the same thing at all.

Image: US President-elect Donald Trump has rattled the United States’ European allies by describing NATO as “obsolete” and praising the United Kingdom’s decision to leave the European Union. (Reuters/Shannon Stapleton)