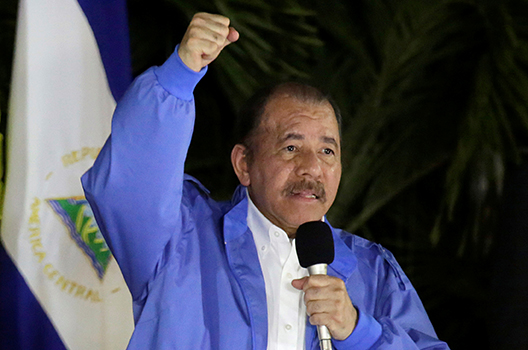 After US National Security Advisor John Bolton warned the “troika of tyranny”—Cuba, Nicaragua, and Venezuela—of forthcoming action earlier in November, it was only a matter of time before the Trump administration escalated its response to the violent repression this spring of anti-government demonstrators and the continued erosion of democratic institutions in Nicaragua. The announcement by the US Treasury Department’s Office of Foreign Assets Control (OFAC) on November 27 of a new sanctions regime targeting Daniel Ortega’s administration and its supporters was a delayed but targeted way of increasing pressure on the Nicaraguan president and his cronies.

The new Nicaragua sanctions executive order (EO) is strategically scoped to expand the previous US sanctions actions taken in December and June under the Global Magnitsky human rights abuse and corruption authority. The new EO targets those involved in serious human rights abuse, corruption, and undermining democracy and stability in Nicaragua. Notably, it provides authority for the United States to apply sanctions against any government official who has served since Ortega returned to power in 2007. This significant broadening of the duration for sanctions investigations puts all current and former members of the Ortega administration on notice.

This new country-specific sanctions program ratchets up pressure on Ortega after months of increasingly harsh rhetoric and incremental actions by the Trump administration. It also reflects a broadening of the administration’s previously myopic regional focus on Venezuela. The unintended ripple impact of that narrow focus helped propel Nicaragua’s stability into a downward spiral. Previously, Nicaragua benefitted substantially from discounted Venezuelan oil and other economic benefits from Caracas. As sanctions on Venezuela appropriately increased, Nicaragua’s longtime benefactor was forced to cut its aid of up to hundreds of millions of dollars annually compelling Ortega to make domestic cuts of his own. Ortega’s April announcement of a decrease in public pensions eroded much of his public support. The ensuing demonstrations and violent government response resulted in the deaths of more than 300 people and prompted condemnation from both sides of the Atlantic.

The Trump administration’s decision to issue the new sanctions authority with the accompanying designations of Vice President Rosario Maria Murillo de Ortega (who is also the first lady of Nicaragua) and key adviser Nestor Moncada Lau is a significant escalation in a country with which the United States has a complicated history.

While stopping short of designating President Ortega himself, the Trump administration clearly appears to prefer regime change. The move also adds indirect pressure on Venezuela, another component of Bolton’s troika of tyranny, by imposing economic consequences on a staunch ally of Caracas.

The political upheaval in Nicaragua, and ensuing decline in investment, private consumption, and exports, has already contributed to a four percent decline in GDP for 2018, according to the International Monetary Fund. With a largely dollarized economy, the new sanctions are certain to exacerbate this decline. Assuming that regime change is in fact the unstated but actual policy objective behind the US sanctions, the question then becomes: can the Ortegas retain control or will the sanctions effectively facilitate their political downfall?

The Trump administration made clear in the announcement on November 27 that it “will continue to add pressure on the Ortega regime and its supporters, using all the economic and diplomatic tools at our disposal.”

Despite this looming threat, the significant sanctions action of elevating Nicaragua as a country of concern such that it warranted its own sanctions program came months after the deadly protests erupted.

The Trump administration is juggling its many competing foreign policy priorities, which could suggest that interest in Nicaragua may be sporadic. However, as the Ortegas cling to power, future domestic flare-ups may draw renewed US attention.

Image: Nicaragua President Daniel Ortega speaks during a meeting with representatives of the Bolivarian Alliance for the Peoples of Our America (ALBA) in Managua, Nicaragua, November 8, 2018. (REUTERS/Jorge Cabrera)