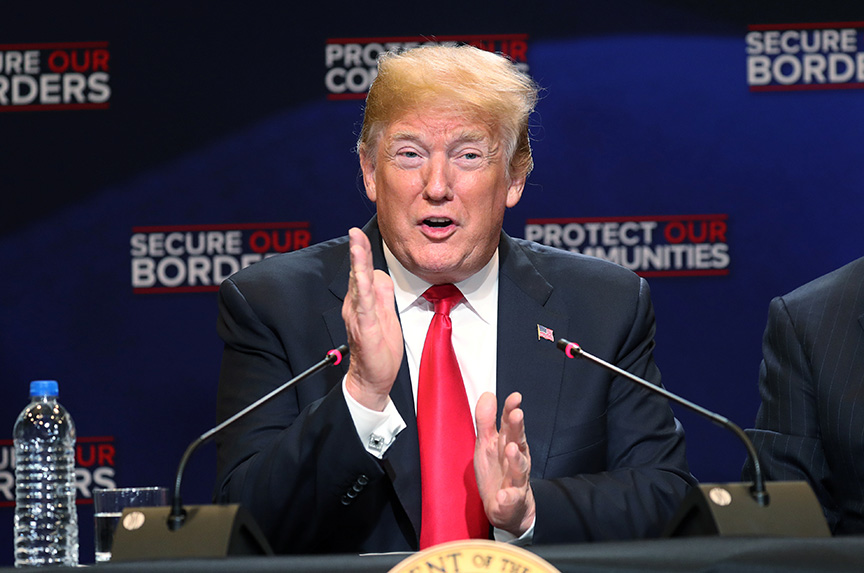 US President Donald J. Trump on May 24 abruptly called off a June 12 summit with North Korean leader Kim Jong-un. The highly anticipated summit—one frequently touted by Trump himself—was to be held in Singapore.

“I was very much looking forward to being there with you. Sadly, based on the tremendous anger and open hostility displayed in your most recent statement, I feel it is inappropriate, at this time, to have this long-planned meeting,” Trump wrote to Kim. “Therefore, please let this letter serve to represent that the Singapore summit, for the good of both parties, but to the detriment of the world, will not take place.”

Trump scrapped the summit after a North Korean vice minister of foreign affairs described US Vice President Mike Pence as a “political dummy.”

Trump’s letter echoed some of his earlier heated rhetoric on North Korea.

“You talk about your nuclear capabilities,” Trump wrote, “but ours are so massive and powerful that I pray to God they will never have to be used.”

The summit would have been the first meeting between the leader of North Korea and a sitting US president.

Trump’s decision coincided with the destruction by North Korea of its nuclear test site at Punggye-ri.

Atlantic Council experts comment on Trump’s decision. Here’s what they had to say:

Alexander “Sandy” Vershbow, distinguished fellow in the Atlantic Council’s Scowcroft Center for Strategy and Security. He served as the US ambassador to South Korea from 2005 to 2008.

“While ‘wise’ is not a word usually used for President Trump, it was wise to cancel the meeting in Singapore.  It has been clear from the outset that there is no common understanding of ‘denuclearization’ between the United States and North Korea, even after two Pompeo meetings with Kim Jong-un. Nor is there any sign of agreement on the timeline, conditions and incentives for implementation.

“If President Trump wants, as he says, to avoid the mistakes of previous administrations, much more diplomatic spadework is needed.”

“There is a  chance that the June 12 meeting in Singapore will still occur. This could be a classic President Trump ‘Art of the Deal’ response to classic North Korean tactics, and perhaps should not be taken as a guarantee that the meeting is off. The ball is now in the North Korean court—will they escalate substantially, or will they return to quiet diplomacy?  This White House announcement could be considered akin to the rhetoric last year about a ‘bloody nose’ military operation, which was meant both to pressure Kim Jong-un to come to the nuclear negotiating table and to reinforce US leverage for when that table was ready to be used.

“However, the other alternative is that the United States intends to terminate or pause the ongoing diplomatic process. Recent North Korean actions and statements (e.g., calling the routine ROK-US exercise a ‘provocative military disturbance’ after previously agreeing to accept it) could be considered a lack of good faith in this ongoing trilateral process.  If that is the case, then expect significant North Korean escalation, a return to missile (and, over time, nuclear warhead) testing, and a heightened crisis environment.

“A key open question remains: Was the Blue House and South Korean President Moon Jae-in and his team consulted prior to the White House decision and announcement?  If so, then that bodes very well for future progress. If not, then we should worry very much that North Korea will succeed in driving a wedge between the two allies, to the great detriment of US and ROK national security interests.”


Robert A. Manning, senior fellow in the Atlantic Council’s Scowcroft Center for Strategy and Security.

“This looks more like a deferral than a cancellation. The tone of Trump’s letter is civil and diplomatic. There are lots of doors left open.

“The North Koreans have been very clear and consistent. They are ready to move in a phased and synchronous manner. I think the Trump administration is right in wanting to have things frontloaded. That avoids the mistakes of the previous agreements with North Korea. However, they want everything for nothing. The North Koreans need to know that if they do X they will get Y. The Trump administration really didn’t anticipate that they had to put something on the table. We need to be prepared to offer them a package that could include sanctions relief, economic cooperation, and security assurances.

“The problem has always been that this process is all backwards. Usually a summit comes after both sides have taken certain steps.”

“The Trump-Kim summit was doomed from the start. The North Koreans never had any intention of giving up their nuclear weapons and never indicated in any meaningful way that they would.

“By agreeing to a leadership summit with Kim, Donald Trump gave away a good deal of America’s leverage in exchange for nothing in return from the North Koreans. Because the Chinese, North Koreans, and South Koreans all supported a gradual process of confidence-building measures and Trump was alone in calling for the immediate denuclearization of North Korea, it will now be impossible to maintain strong sanctions pressure on North Korea.

“Donald Trump lost the negotiations with North Korea before he realized they had even begun. America has yet again been weakened by the strategic incoherence and chaotic, ill-informed process of President Trump and his team. It looks like Trump will not be awarding himself a Nobel Prize after all.

“Trump’s letter to Kim reads like the cry of a jilted lover—threatening revenge and also appealing for a second chance.”