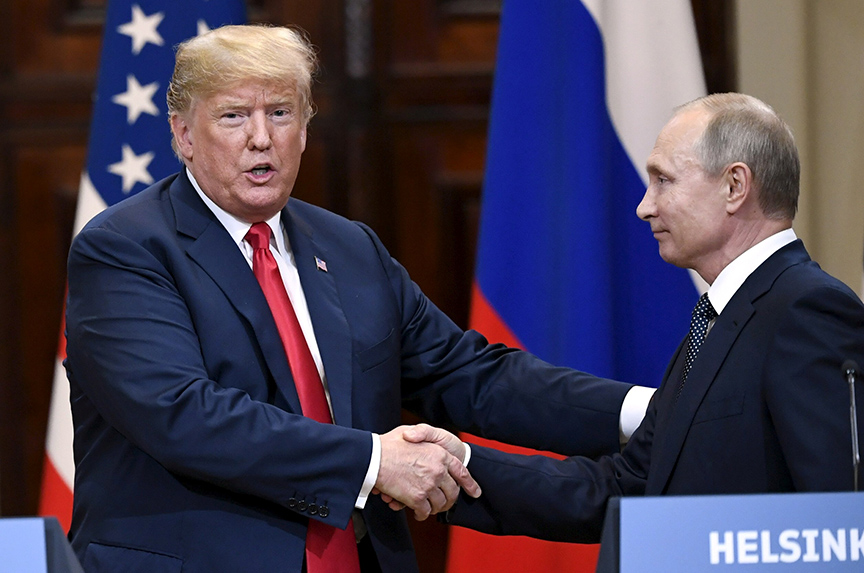 ‘Better no meeting than a bad one,’ says the Atlantic Council’s Daniel Fried

Hours after the Kremlin confirmed a meeting between Vladimir Putin and Donald J. Trump on the sidelines of the Group of 20 summit in Buenos Aires on December 1, the US president cancelled the appointment with his Russian counterpart citing the continued detention of Ukrainian naval vessels and their crew by Russia.

“Better no meeting than a bad one,” said Daniel Fried, a distinguished fellow in the Atlantic Council’s Future Europe Initiative and Eurasia Center.

Fried was referring to the last Trump-Putin summit in Helsinki in July.

“The July 16 Helsinki meeting was framed by Trump’s pre-meeting statement that problems in US-Russia relations are principally the fault of the United States and his press conference fawning over Putin,” Fried said. “This was perhaps the worst showing by a US president in any meeting with a Russian counterpart though, fortunately, the strategic consequences were scant.”

However, Fried added, no meeting between the two leaders also means “a lost opportunity and abdication of US leadership.”

“The US president should be able to hold Putin to account for Russia’s latest aggression in Europe, against Ukraine,” he said.

Michael Carpenter, a nonresident senior fellow with the Atlantic Council’s Eurasia Center, said: “In light of President Trump’s inability to stand up to President Putin, it’s good this meeting was canceled.”

“I have strong doubts that the Ukraine crisis was the real reason given the timing of the president’s announcement, which came only hours after news broke about his business dealings with the Kremlin during the 2016 presidential campaign. But whatever the true reason, I think it’s good we avoided a possible Helsinki redux,” he added.

Mark Simakovsky, a nonresident senior fellow in the Atlantic Council’s Eurasia Center, said: “President Trump’s snap tweet to cancel his meeting with President Putin over the detention of Ukrainian sailors and ships reinforces the critical role that American diplomacy must play in reducing the escalating tension between Russia and Ukraine after Russia’s destabilizing actions last weekend in the Kerch Strait.”

“The stated rationale behind the cancellation, if true, is a positive sign and raises the stakes for the Kremlin as it deals with the potential for its destabilizing actions in Ukraine to have real consequences,” he added. Simakovsky formerly served as the Russia country director and Europe/NATO chief of staff in the Office of the Secretary of Defense for Policy.

On November 25, a Russian coast guard ship rammed a Ukrainian navy tugboat that was trying to enter the Sea of Azov—waters that are shared by Ukraine and Russia as agreed to in a 2003 treaty.

Russian forces also fired on Ukrainian naval vessels injuring six crewmembers and then captured the three vessels and two dozen crewmembers. The incident happened when two Ukrainian navy artillery boats and the tugboat were traveling from Odesa on the Black Sea to Mariupol in the Sea of Azov via the Kerch Strait, a narrow passage between the Crimean Peninsula and Russia.

This incident has put Trump on the spot.

Trump, who has accused his predecessor, Barack Obama, of allowing Russia’s annexation of Crimea in 2014, has had a lukewarm response to Russia’s latest aggression against Ukraine. In his first comments on the matter, he said: “We don’t like what’s happening.”

US Secretary of State Mike Pompeo, however, had a stronger statement in which he expressed “deep concern” over the incident and said “the United States condemns this aggressive Russian action.”

Trump had faced calls for a stronger response.

In an earlier interview with the New Atlanticist, Fried said: “Given Russia’s escalation in the Kerch Strait, any meeting that did not include a US warning that Russia should back off could signal acquiescence and trigger worse Russian behavior.”

And then, Trump took to Twitter. Announcing his decision to cancel his meeting with Putin, he wrote in a tweet on November 29: “Based on the fact that the ships and sailors have not been returned to Ukraine from Russia, I have decided it would be best for all parties concerned to cancel my previously scheduled meeting…in Argentina with President Vladimir Putin. I look forward to a meaningful Summit again as soon as this situation is resolved!”

Simakovsky said Russia’s actions in the Kerch Strait should not be treated in isolation. “The release of Ukrainian sailors should be the first step in a wider American effort to end Russian occupation of Ukraine and end Russia’s creeping annexation over both Ukrainian territory and the waters surrounding Ukraine,” he said. “If the cancellation is indeed an attempt to find a way to resolve Russian-Ukraine tension, then it is a welcome sign from the administration.”

“That said, President Trump’s tweet could have also been a reaction to domestic developments and can easily be changed in the next forty-eight hours,” he pointed out.

“The fact that the cancellation came within hours of the announcement of critical new developments related to the Mueller investigation, also reinforces that the president, and his advisers, were greatly concerned about a damaging ‘Helsinki redux’ that could have placed the president and his Russia policy in worse shape after the summit in Argentina, as Congress will be scrutinizing any Trump-Putin interactions as they prepare for new sanctions in the next Congress,” he added.

Trump’s tweet came hours after the Kremlin confirmed that Putin would meet Trump in Buenos Aires on December 1. The two leaders have met three times—twice at the G20 summit in Hamburg in July of 2017 and then in Helsinki a year later.

While the White House had not publicly confirmed the meeting in Argentina, Kremlin spokesman Dmitry Peskov said it had. Trump, too, had earlier on November 29 told reporters he would “probably” meet Putin.

Previewing the meeting, Peskov said there would be “a brief conversation between the presidents, as we expect, and then negotiations, which can last about an hour.”

That, it appears, is no longer the case.

“One can imagine the president will still find time to see Putin in Argentina and the mixed signals this would send would be counterproductive,” said Simakovsky.

Image: Matchboxes with pictures of Russian President Vladimir Putin and US President Donald J. Trump are seen in a shop window in Helsinki, Finland, on July 14. (Reuters/Leonhard Foeger)