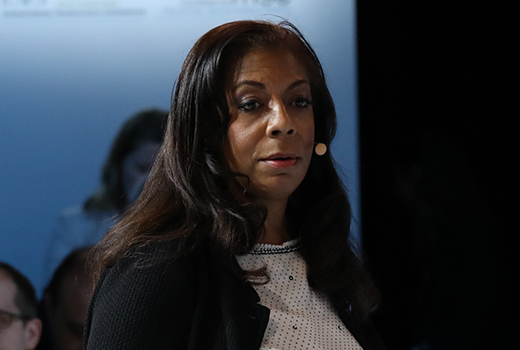 NATO is a critical part of US President Donald J. Trump’s foreign policy doctrine, which aims to strengthen rather than weaken the Alliance, a senior US State Department official said in Washington on April 3.

“The Trump doctrine I think speaks to some of the challenges that NATO has faced in recent years,” said Kiron K. Skinner, director of the Office of Policy Planning and senior policy adviser to Secretary of State Mike Pompeo.

Skinner said the US approach to NATO aims to preserve sovereignty of the nation state and focus on equitable burden sharing — “core aspects of NATO that will strengthen, not weaken, NATO.”

“Nothing in the Trump doctrine suggests that we are leaving the multilateral frameworks. But we are saying how do we right-size them, how do we make sure that they represent the national interest of the various nation-states,” Skinner said.

Skinner participated in a panel discussion at NATO Engages, a daylong conference jointly hosted by the Atlantic Council, the German Marshall Fund of the United States, and the Munich Security Conference in Washington.

She was joined on the panel by Polish Foreign Minister Jacek Czaputowicz and Constanze Stelzenmüller, Robert Bosch senior fellow at the Brookings Institution. Atlantic Council President and CEO Frederick Kempe moderated the discussion.

Trump has unnerved allies with his insistence that they increase their defense spending to meet a 2 percent of GDP goal agreed to by allies at NATO’s 2014 Wales Summit. That target is to be met by 2024. At present seven of the Alliance’s twenty-nine member states meet the goal.

In July 2018, Trump plunged NATO’s Brussels Summit into chaos by excoriating allies on the subject of defense spending. He even threatened to pull the United States out of the Alliance if allies didn’t spend more.

On burden-sharing, Skinner said, “it doesn’t mean that everyone gives the exact dollar amount, but what they can do in increased numbers for collective defense.”

This is important, she explained, because it sends a signal to potential adversaries like Russia that the Alliance is working together.

Noting threats posed by a revisionist Russia and an increasingly assertive China, Kempe contended that the Alliance is at a “defining moment.”

Czaputowicz agreed that Russia today poses the main threat to the countries of Central and Eastern Europe. “So for us, traditional role of NATO function, which is common defense, is crucial,” he said.

At the same time, he added, “we also observe new kind of threats, hybrid, cyber, terrorism. So we have to demonstrate our solidarity with our allies”

“For the Alliance to be united, you need external threat,” the Polish foreign minister said, adding that this threat is posed by Russia as well as China.

Czaputowicz said when it comes to Russia, members of the Alliance are “quite united” on facing the threat. On China, however, he conceded that there are “more divergent opinions.”

Despite warnings from the United States and the European Union (EU), Italy became the first member of the G7 in March to sign up to China’s Belt and Road Initiative — a trillion-dollar infrastructure project.

Within the Alliance unity has been also been tested by Germany’s decision to participate in the Nordstream 2 energy pipeline project with Russia, which would bring gas from Russia to Germany.

Speaking at NATO Engages on April 3, US Vice President Mike Pence made a pointed reference to Nordstream 2 saying that if Germany persists in building the Nordstream 2 energy pipeline it could, as Trump has said in the past, “turn Germany’s economy into literally a captive of Russia.”

Kempe asked Skinner why, if national sovereignty is important for the Trump administration, do the president and the vice president criticize Germany for making a sovereign choice.

Stelzenmüller described Nordstream 2 as “a really geopolitically stupid project.” However, she added, “Western governments don’t tell multinational conglomerate to stop operations.” And doing so would open Germany up to “lawsuits in the billions.”

She pointed out that there are Eastern European countries which buy 100 percent of their energy from Russia and are “not notably in any way captive of Russia — the Baltics, for example.”

“These things do not correlate and they also do not correlate in the German case, which is why I will say to you it is insulting to call us captive of Russia because we’re holding together the Russian sanctions consensus in Europe at a very real cost to German business,” she said.

On defense spending, another point on which Pence hammered Germany in his remarks, Stelzenmüller said Germany should spend more. But, she added, “it is unfair to say that we’re not doing anything.  We have hugely increased the German defense spending in the past years.  We are racing to meet those commitments.”

Madeleine K. Albright, chair of the Albright Stonebridge Group and a former US Secretary of State, closed out the conference with a look at NATO at eighty.

In a thinly veiled swipe at Pence’s criticism of allies, Albright said: “It’s clear to me that this is a family gathering.  And we’ve heard stirring calls for unity and pointed messages aimed at certain family members.  I, too, want our allies to do more, but I find it more effective with my own family to persuade, rather than insult.”

She recalled how the Prague coup in 1948 drove her family from Czechoslovakia. “But it also sparked my lifelong identification with [NATO], because more than any other single event the Prague coup in February 1948 awakened America and Western Europe to the need for a North Atlantic Treaty Organization,” she said.

“From its founding until the fall of the Berlin Wall, NATO had the dual role of shielding freedom in the West while preserving hope in Europe’s East,” Albright said.

While a decade ago the threats facing NATO were in the realm of cyber, “now we are back at looking at some of the more traditional ways that NATO has to operate because serious threats emanate from viral ideologies, failed states, irresponsible leaders, dangerous technologies, and the prospect of an environmental catastrophe,” Albright said. “There are challenges, as well, within our Alliance, including attempts by foreign adversaries to interfere in our democracies.”

“This toxic blend demands a multifaceted response, meaning that the NATO of the next ten years must combine political wisdom with military clout and diplomatic skills. It must be versatile and adept at preventive action.  And it must be counted on to deliver whenever Euro-Atlantic security is on the line,” she said.

“We need a strategy to deal with uncertainty.  And as the secretary-general told Congress today, that strategy is NATO,” she added, referring to NATO Secretary General Jens Stoltenberg’s address to Congress.

Albright said while the discussion these days is dominated by burden sharing, NATO has “always been and has to remain a hundred percent for democracy.”

Earlier this year, Albright helped launch the Declaration of Principles, an initiative led by the Atlantic Council aimed at rallying the democratic world on behalf of common values.

“NATO turns 70 tomorrow, and institutions like people do need a little refurbishing, and I can testify to that,” Albright said. “But it is clear that we started taking some of our principles for granted.  So the time is right now to renew our vows and to engage a new generation in freedom’s cause.”

Albright ended her remarks with a challenge to the younger generations in the audience.

Image: Kiron Skinner, director of policy planning for the US Department of State, speaks at the NATO Engages event in Washington, DC on April 3, 2019. ((Photo Credit: ImageLinkPhoto.com/Dennis Kan)