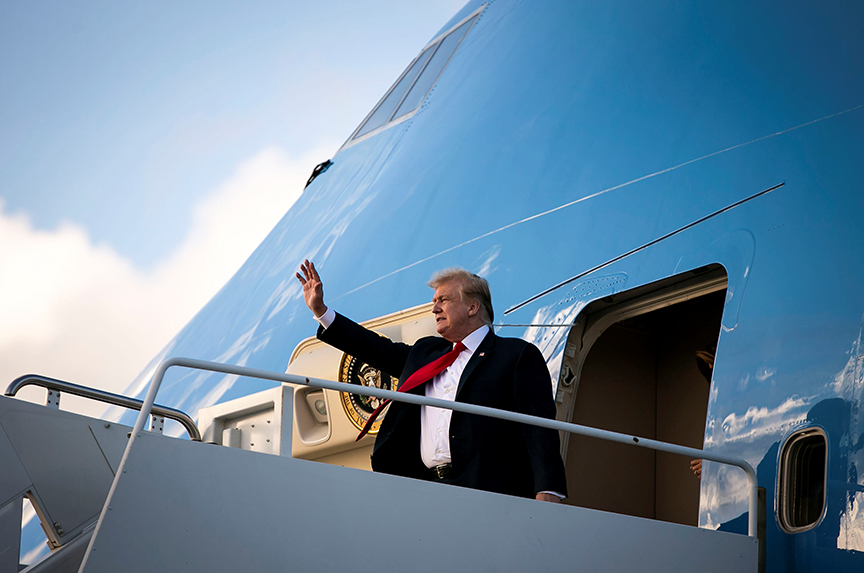 The Trump administration’s decision not to grant any more sanctions waivers to countries that import oil from Iran is part of a maximum pressure strategy intended to cut off a critical source of revenue and force Iran to the negotiating table. But it will likely result in an increase in oil prices, resistance from countries that continue to buy Iranian oil, and a backlash from Tehran, according to Atlantic Council analysts.

“The Trump administration’s announcement is certain to face pushback from major importers of Iranian oil, raise prices for consumers, and further erode the utility of sanctions as a non-military tool of US foreign policy,” said Barbara Slavin, director of the Atlantic Council’s Future of Iran Initiative.

“It is cruel because obviously it is going to hurt ordinary Iranians,” she said. “It is counterproductive because it is not going to bring Iran back to the negotiating table and it is not going to change Iran’s regional posture significantly,” she added.

Announcing US President Donald J. Trump’s decision not to grant any more waivers, the White House said in a statement on April 22 that this was “intended to bring Iran’s oil exports to zero, denying the regime its principal source of revenue.”

Trump pulled out of the Iran nuclear deal—formally known as the Joint Comprehensive Plan of Action (JCPOA)—on May 8, 2018. In November, his administration reimposed sanctions on Iran. However, in a move that caught many by surprise at the time, Trump granted sanctions waivers to eight countries that were buying oil from Iran—China, India, South Korea, Japan, Italy, Greece, Taiwan, and Turkey.

Trump administration officials later explained that all of the exempted countries had demonstrated significant reductions in their purchase of Iranian crude. This, they said, made them eligible for exemptions. Three of these countries—Greece, Italy, and Taiwan—have cut their imports of Iranian oil to zero.

The decision not to grant any more waivers “is likely to be most impactful for India, Turkey, and China,” said Samantha Sultoon, a senior fellow with the Atlantic Council’s Global Business and Economics Program and the Scowcroft Center for Strategy and Security.

“Given the fractious relationship between Washington and Ankara compounded by [Turkish President Recep Tayyip] Erdoğan’s inclination to buck the NATO alliance—and, therefore, participation in the F-35 joint strike fighter program—in favor of purchasing the Russian-made S400 system, the decision to pull Turkey’s oil waiver in not going to entice Turkey to realign with US interests,” said Sultoon.

Any country still importing oil from Iran will be subject to US sanctions beginning May 2.

Slavin said suggested that the US decision should increase pressure on Europe to finalize INSTEX and incentivize others to create new mechanisms to circumvent the US dollar. INSTEX, the Instrument in Support of Trade Exchanges, is a European-government-controlled Special Purpose Vehicle that would allow companies based in the European Union to continue to engage in business with Iran without running afoul of US sanctions.

The waiver decision is also important in the global trade context, explained Marie Kasperek, deputy director in the Atlantic Council’s Global Business and Economics Program. Noting that Japan and China are among the countries affected by the decision, Kasperek said: “The news comes during active trade talks with both countries and  ahead of Japanese Prime Minister Shinzo Abe’s visit to Washington this week and US Trade Representative Robert Lighthizer’s trip to China, the world’s top oil importer, next week.”

“In both cases, the developments will put pressure on trade negotiations. In this way, sanctions are being added as a pressure point in addition to tariffs in the trade negotiation toolbox of the [Trump] administration,” she added.

Wald noted that China is the largest importer of Iranian oil. “When it comes to China, the [Trump] administration has lost a really good bargaining chip that they had in these trade negotiations,” said Wald.

Until now the question was would the Trump administration press China in trade negotiations on its Iranian oil imports, but the April 22 decision has taken that option off the table, she added.

US Secretary of State Michael Pompeo said in a statement on April 22 that the United States will “stand by our allies and partners as they transition away from Iranian crude to other alternatives.”

Pompeo said the Trump administration has had “extensive and productive discussions with Saudi Arabia, the United Arab Emirates, and other major producers to ease this transition and ensure sufficient supply. This, in addition to increasing US production, underscores our confidence that energy markets will remain well supplied.”

The White House statement echoed this point, noting: “The United States, Saudi Arabia, and the United Arab Emirates, three of the world’s great energy producers, along with our friends and allies, are committed to ensuring that global oil markets remain adequately supplied. We have agreed to take timely action to assure that global demand is met as all Iranian oil is removed from the market.”

Pompeo said the Trump administration has “taken Iran’s oil exports to historic lows, and we are dramatically accelerating our pressure campaign in a calibrated way that meets our national security objectives while maintaining well supplied global oil markets.”

Contrary Pompeo’s assertion, Sultoon said, the waiver decision “does not appear to be part of a broader strategy regarding global oil supply.”

“The Trump administration’s continued sanctions on Iran, Venezuela, and Russia is successfully hampering global flows from these countries, but it’s also prompting an increase in the price of oil without providing an effective global solution,” she said.

“The initial response from oil markets reflects a lack of preparedness for this decision,” said Sultoon. “Recent market data reflects a likely shortage between Iranian supply and the potential output from Saudi Arabia and the United Arab Emirates, which is unlikely to be rectified in the short term,” she added.

Ellen Wald, a  nonresident senior fellow with the Atlantic Council’s Global Energy Center, said the rise in oil prices “is really an indication of the fact that this was not an expected move.”

Iran’s exports of heavy crude oil will also be much more difficult to replace, said Wald.

While the Trump administration has said US, Saudi, and Emirati producers will replace the Iranian oil that is taken off the market, Wald said, “there are some significant questions on that front, particularly when it comes to Saudi Arabia.”

“While Secretary Pompeo indicated that Saudi Arabia and the UAE have pledged to make up lost Iranian barrels, a vague statement from Saudi Energy Minister Khalid Al-Falih today suggests that Saudi may let the oil price stay higher for a while before they increase production, perhaps as a response to the United States’ equally surprising decision in November to issue waivers, which contributed to a drop in oil price of roughly $35,” said Randolph Bell, director of the Atlantic Council’s Global Energy Center.

On April 22, Saudi Oil Minister Khalid Al-Falih reiterated Saudi Arabia’s longstanding policy of working toward oil market stability. “This is not necessarily the same as replacing barrel for barrel,” said Wald, adding, “If Saudi Arabia is perceived to have entered into some kind of agreement with the United States it could very much hamstring them when it comes to their OPEC meeting and, in fact, lead to the end of the production agreement at that time.”

In December 2018, a global coalition of oil producers known as OPEC+, which includes members of the Organization of the Petroleum Exporting Countries (OPEC) and other producers, including Russia, agreed to cut production by 1.2 million barrels per day. The decision was intended to steady oil prices, which had been sharply fluctuating.

Global oil production has also slumped due to involuntary efforts—notably a drop in Iran’s oil exports as a consequence of reimposed US sanctions.

How may Iran react?

The White House said the Trump administration and its allies are “determined to sustain and expand the maximum economic pressure campaign against Iran to end the regime’s destabilizing activity threatening the United States, our partners and allies, and security in the Middle East.”

Pompeo said that the United States “will continue to apply maximum pressure on the Iranian regime until its leaders change their destructive behavior, respect the rights of the Iranian people, and return to the negotiating table.”

“Iranians will suffer, but their leaders will not bow to a US government drunk on unilateralism and coercion,” said Slavin.

“Indeed, the US action will feed the Iranian narrative of victimization and enable the government to blame Trump for economic woes. It will not change Iran’s regional posture—especially at a time when the United States is withdrawing troops from the Middle East and cutting back on development and reconstruction aid,” she added.

Slavin worried about more friction in the region because Iran would be seen as extremely weak if it gives in to US pressure. Iran could retaliate by making it harder for the United States to reach a peace deal with the Taliban in Afghanistan, put pressure on Iraq to expel US troops, and make the situation in Yemen even worse, said Slavin.

Bell said he was surprised by the Trump administration’s decision to end all waivers.

“Given President Trump’s sensitivity to oil prices, the reversal from the administration’s November decision to extend waivers to eight countries to prevent an oil price spike was unexpected,” said Bell.

“Most expected the push to zero exports would take at least until the fall. The administration’s announcement has already pushed Brent crude prices up over 3 percent,” he said.

Bell said Saudi Arabia and the United Arab Emirates are the “big winners from the administration’s surprise decision to end all waivers for importing Iranian oil.”

“They get both the geopolitical outcome they want—undercutting Iran— and a higher oil price,” Bell explained.

Trump administration officials had for months been expressing their determination to drive down Iranian oil imports. Speaking at the Atlantic Council’s 2019 Global Energy Forum in Abu Dhabi on January 12, Brian Hook, the US special representative for Iran and senior policy adviser to Pompeo, said the Trump administration was determined to drive Iran’s oil exports down to zero in its effort to maximize economic pressure and force Tehran back to the negotiating table to discuss a “comprehensive deal” in place of the JCPOA.

“We know historically that Iran does not come back to the negotiating table without pressure… so we are very focused on the energy side because that is where Iran’s economy is structured in a way where it is its greatest vulnerability,” Hook said.

Hook said the Trump administration is seeking to get a “new and better deal with the Iranians… but it needs to be comprehensive, it needs to include all of the threats that Iran presents to regional peace and security, and the nuclear piece is the most significant.”