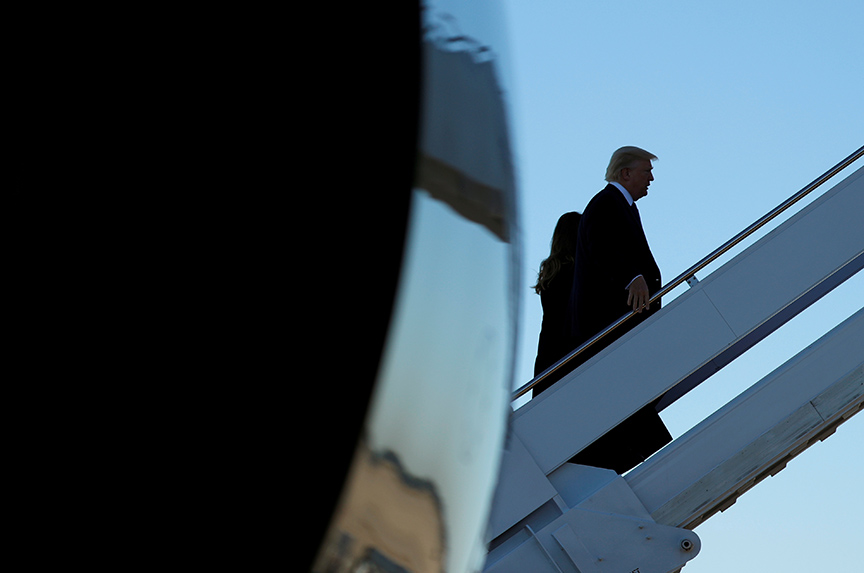 On his first full business day as president, Donald J. Trump withdrew the United States from the Trans-Pacific Partnership (TPP), a multilateral trade agreement with eleven other Asia-Pacific nations that was viewed as a pillar of US commitment to Asia.

At the height of a nuclear crisis with North Korea, he instructed his advisers to pull the United States out of a free-trade pact with South Korea, a longtime US ally.

Further, he ratcheted up the rhetoric with Kim Jong-un, North Korea’s mercurial leader, who conducted missile and nuclear tests in defiance of international condemnation.

Trump’s actions and rhetoric have left the region feeling uneasy. By rejecting TPP, he removed a key pillar of Obama’s “rebalance” toward Asia, but has yet to articulate his own Asia strategy.

Now, he is set to embark on a trip to Asia, his first as president. He will visit China, Japan, South Korea, the Philippines, and Vietnam. The trip, which spans November 3-14, is an unusually long one for a US president.

“The White House is trying to make this a very traditional US-leadership-in-Asia trip, but it is very difficult to overcome some of the things that they have already done in the opposite direction,” said Robert A. Manning, a resident senior fellow in the Atlantic Council’s Brent Scowcroft Center on International Security.

North Korea will dominate Trump’s agenda. On the domestic front, the indictment against Paul Manafort, his former campaign manager, in connection with the Russia investigations will likely cast a shadow.

“The biggest challenges are the absolute chaos in the American political situation, the rise of China, and the seeming absence of an American strategy for Asia,” said Jamie Metzl, a nonresident senior fellow in the Atlantic Council’s Brent Scowcroft Center on International Security.

The combination of these factors has created a level of “strategic uncertainty” in Asia greater than has been seen in many decades, he said, adding that the Trump administration should put together and promote a “comprehensive strategic strategy for Asia.”

“Because we haven’t seen that [strategy] and because of the chaos and dysfunction of the American political context, the president will be in a very weak condition as he travels through Asia,” Metzl said.

Once the administration has formulated its Asia strategy, it should work with its friends and allies in the region to address the challenges posed by a rising China and North Korea’s nuclear ambitions, said Metzl, adding: “Until there is a strategic vision coming out of the United States, rallying others to the cause will be impossible.”

However, “anyone who is expecting there to be some large clarification on the way Trump sees the world and Asia in it” will likely be disappointed, said Leland Miller, a nonresident senior fellow in the Atlantic Council’s Brent Scowcroft Center on International Security. Speaking in an Atlantic Council phone briefing, he said that Trump’s trip “will probably be much less substantively interesting than many people suspect or fear.”

An opening for China

Trump’s approach to international relations, determined by his “America First” policy, has created an opening for China to assert itself as a leader on the world stage. Among the most significant instances of US retreat is the withdrawal from the Paris Climate Agreement. China, in contrast, has sought to take the lead on addressing climate change.

Xi is also in a stronger position since his reelection to a second five-year term in October.

“On one hand you have Xi Jinping with his grand vision of One Belt One Road [China’s economic and infrastructure initiative], the Chinese shifting the locus of world order from the transatlantic to Eurasia, revolving around China, and what do we put up against that? America First?” said Manning. “That’s not much of an inspiring vision.”

“China is offering global public goods, a bit like the United States did with the Marshall Plan after World War II,” Manning added, “yet the United States is cutting back aid, and its contributions to multilateral banks like the World Bank and Asian Development Bank.”

China, Metzl said, is at present a far more strategic actor than the United States. “If China is playing a strategic game and [Trump] is looking for tweetable deliverables, the advantage will go to China,” he said. “The only way for the United States to strengthen its position vis-à-vis China would be to put together a comprehensive strategy and have a credible structure for implementing that strategy. At present, neither is the case.”

Trump’s trip to Asia coincides with the heightening of the North Korea nuclear crisis. CNN reported on November 2 that Pyongyang is preparing for another nuclear test.

The United Nations (UN) Security Council imposed new sanctions on North Korea in September in response to Kim’s ballistic missile and nuclear tests. Manning, describing the comprehensive economic and financial sanctions as unprecedented, said Trump needs to give them time to work. “I don’t know how it will play out, but we do have to give it a chance to play out,” he said.

Metzl said Trump needs a strategy for North Korea. “Simply raising the level of rhetoric and name calling has strengthened North Korea and weakened the United States,” he said. “Because President Trump has so actively disparaged American allies like South Korea, Japan, and Australia, it is even more difficult for those countries to develop meaningful collaborative strategies for addressing the North Korea problem.”

“The first thing that Donald Trump will need to do to address the North Korea crisis is take a step back from the overheated rhetoric and then put together a real strategy for solving the problem, not just for name calling,” he added.

The UN sanctions only materialized after China, a critical backer of the North Korean regime, moderated its support in the face of US pressure. “China has done more than most people would have ever expected them to do already,” said Manning, giving credit for this to Trump.

In Seoul, Trump will deliver an important address to the National Assembly. He will not, however, visit the demilitarized zone (DMZ) on the border between North Korea and South Korea.

Manning said that the North Koreans could respond to Trump’s presence in the neighborhood by “doing something provocative like an atmospheric nuclear test.”

Meanwhile, there is a growing fear in the region, especially in Seoul, that Trump is planning a military strike against North Korea.

Manning contends that there is no viable military option to address the crisis. Noting that the exact location of many of North Korea’s nuclear and missile facilities is unknown, he said without a clear set of targets, a military strike would serve little purpose. Instead, he said, it would likely provoke the North Koreans into attacking South Korea, claiming a large number of casualties.

“Our allies are very nervous about all the bellicose rhetoric and the taunting and humiliation of Kim Jong-un. That works against an otherwise reasonable [US] policy [on North Korea],” said Manning.

“The Japanese and the South Koreans are very nervous for the same reasons that Bob Corker is nervous about Trump,” he added, referring to the Republican chairman of the Senate Foreign Relations Committee who recently said he worried Trump is leading the United States “on the path to World War 3.””

Trump has been critical of the trade imbalance that exists between the United States and China, which accounts for roughly half the United States’ total trade deficit. That deficit will be a subject for discussion while Trump is in Beijing.

“They should be talking about a policy of reciprocity and the best way to assure that is through a bilateral investment treaty,” he said.

After pulling out of the TPP, Trump has been eager to strike a bilateral trade deal with Japan.

Noting that Abe has had the most success cultivating his relationship with Trump, Manning said the Japanese leader, who staked considerable political capital on making the case for TPP, is likely to politely decline. Abe is actively pursuing TPP minus the United States as well as a trade pact with the European Union.

Japan, Manning said, hopes to try and persuade Trump to return to the TPP after the 2018 mid-term elections in the United States. However, he added, that effort may be in vain.

“Trump’s been in office now for more than nine months and I have seen zero sign of any evolution or change in his very odd views on trade,” said Manning.

US President Donald J. Trump and Chinese President Xi Jinping chatted in Trump’s Mar-a-Lago estate in Palm Beach, Florida, on April 7. The North Korean nuclear crisis and the bilateral trade imbalance are expected to top the agenda when the two meet in Beijing on November 8. (Reuters/Carlos Barria)

Regional expectations of the United States have diminished amid unease over Trump’s rhetoric and actions. A recent Pew Research Center survey found that only 24 percent of Japanese and 17 percent of South Koreans are confident that Trump will do the right thing in world affairs.

While Trump will attend the Asia-Pacific Economic Cooperation (APEC) meeting and the Association of South-East Asian Nations (ASEAN) summit, he will miss an important East Asia Summit in the Philippines. That summit starts on the day Trump returns to the United States. Manning said Trump’s decision not to attend the East Asia Summit is a missed opportunity. Asians are trying to gauge the durability of the US commitment to the region, and US participation in Asian multilateral institutions—ineffective and flawed as they are—is one measure of that.

Manning said Trump’s trip could be a success if he stays on script and refrains from angry outbursts on Twitter.

“With China, he has got to come out with something not just on North Korea, but on stabilizing an extremely rocky economic relationship. He also has to project some sort of long-term American vision for the region,” he added.

Metzl noted that regional expectations of the United States are decreasing by the day.

“This is extremely unfortunate because so many of America’s friends, allies, and partners depend for their very security on a strong America,” he said.

“Rather than rely on bloated rhetoric to express America’s strengths, the president needs to develop a comprehensive strategy for Asia and think far more deeply about how to garner American power, including through the soft power of setting an example that others would want to follow,” he added.

Image: US President Donald J. Trump will embark on a trip to Asia on November 3. He will visit China, Japan, South Korea, the Philippines, and Vietnam. The trip, which spans November 3-14, is an unusually long one for a US president. (Reuters/Kevin Lamarque)