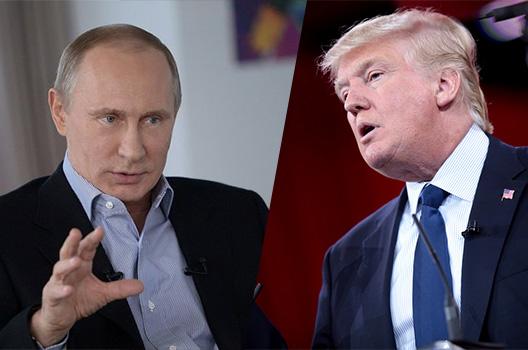 As a candidate, Donald Trump said that if elected president he would examine the possibility of recognizing Russia’s claim to Crimea and lifting sanctions imposed by the United States in response to Kremlin-orchestrated aggression in Ukraine.

On November 8, Trump was elected the forty-fifth president of the United States. The question now is: will he follow through on his campaign rhetoric and reset the relationship with Vladimir Putin’s Russia? Will such a deal come at the cost of America’s values and partners in the region?

Former US President George W. Bush famously stated that he looked into Putin’s eyes and got a sense of his soul. In the summer of 2008, Putin caught Bush by surprise when he started a war with Georgia.

Bush’s successor, Barack Obama, sought to reset the relationship with Russia. Then Secretary of State Hillary Rodham Clinton—Trump’s Democratic presidential opponent—playfully presented a red reset button to Sergei Lavrov, her Russian counterpart. Those plans were tossed into the trash can of history when Russia annexed Crimea in March of 2014.

What lessons can Trump draw from this recent experience? “He should learn that one should make no premature concessions and one has to take a very hard-headed look at what the Kremlin is up to and decide if, in fact, a reset is in our interests and if a reset is possible,” said John E. Herbst, director of the Atlantic Council’s Dinu Patriciu Eurasia Center and a former US ambassador to Ukraine.

Putin, who was among the first to congratulate Trump on his election victory, expressed to the president-elect his willingness to “lift Russian-US relations out of the current crisis, resolve issues on the international agenda, look for effective responses to global security challenges.”

“The point is this: The Kremlin has violated international law in its effort to change the security system that emerged at the end of the Cold War. [Putin] is a revisionist seeking to change the status quo in ways that are dangerous to our interests,” Herbst warned.

“The most important thing that we should be doing with Russia right now is using our great strength to stop that,” he added.

Trump, who prides himself as a dealmaker, said on the campaign trail: “Some say the Russians won’t be reasonable. I intend to find out. If we can’t make a deal under my administration, a deal that’s great—not good, great—for America, but also good for Russia, then we will quickly walk from the table. It’s as simple as that.”

On a visit to Germany on November 17, Obama urged Trump to stand up for American values and interests in his dealings with Russia and to avoid taking a “realpolitik approach.”

“I’ve sought a constructive relationship with Russia, but what I have also been is realistic in recognizing that there are some significant differences in how Russia views the world and how we view the world,” Obama said.

“I don’t expect that the president-elect will follow exactly our blueprint or our approach, but my hope is, is that he does not simply take a realpolitik approach and suggest that if we just cut some deals with Russia, even if it hurts people, or even if it violates international norms, or even if it leaves smaller countries vulnerable or creates long-term problems in regions like Syria—that we just do whatever is convenient at the time,” he added.

In a conference call hosted by the Atlantic Council, Jaap de Hoof Scheffer, a former secretary general of NATO, described Putin as “a zero-sum player” and Trump as a likely “transactional president.” Anders Fogh Rasmussen, another former NATO secretary general, agreed with De Hoop Scheffer on the risk of “making Ukraine a bargaining chip” in any deal with Russia. “Ukraine would be left as a clear loser in an overall deal between two strongmen—Mr. Trump and Mr. Putin,” he said.

What would be the consequences of a bad deal with Russia?

“The consequences of a bad deal would be a Ukraine dominated by Russia or at least open to Russian domination without support from the United States and the West, and a Russia emboldened by acceptance of this aggression and pushing its lot in Kazakhstan, in Latvia, in Estonia, and maybe other places,” said Herbst.

Trump’s victory has been celebrated in Moscow as a win for Russia.

The Russian elite were nervous in the run-up to the election, but now, “I would say they are satisfied with the results partially because Donald Trump tried hard to avoid any kind of harsh comments about Russia,” said Gennady Burbulis, a former deputy prime minister of Russia.

Burbulis contended that Putin would “like to reconnect and re-establish the normal, practical dialogue with the United States.”

“He would be willing to be more flexible in order to get back to this normal dialogue. Most importantly, he would like to regain his role as an influential world politician,” he said. “From that point of view President-elect Trump would be more convenient.”

Less than two weeks before the US presidential election, Putin signed a law that suspends Russian participation in a treaty with the United States on the disposal of weapons grade plutonium. In return for a resumption of Russian participation, Putin laid out a set of conditions that include: lifting of all US sanctions on Russia and a reduction of US troops and military infrastructure in Eastern Europe.

Trump has said he would review sanctions the Obama administration imposed on Russia in response to the annexation of Crimea and Russian support for separatists in eastern Ukraine. The European Union imposed similar sanctions.

As the US sanctions were issued by executive order, it will be easy for Trump to lift them—if he decides to do so.

This has put a worrying question mark over the fate of the sanctions. There is a possibility that the sanctions regime may in fact crumble as European leaders—especially those in countries that are hurting because of their economic dependence on Russia—will see Trump’s position as an excuse to relieve the pressure on Russia.

Herbst said Russia has, so far, not paid a price for its meddling in Western politics. “If you consider, as they seem to, Trump’s victory as their victory then they have seen some gain,” he said. And so, he added, “it would be very odd if we did not see more Russian meddling in Western elections.”

Image: US President-elect Donald Trump (right) spoke with Russian President Vladimir Putin (left) on the phone on November 14. Putin was among the first world leaders to congratulate Trump on his election victory.