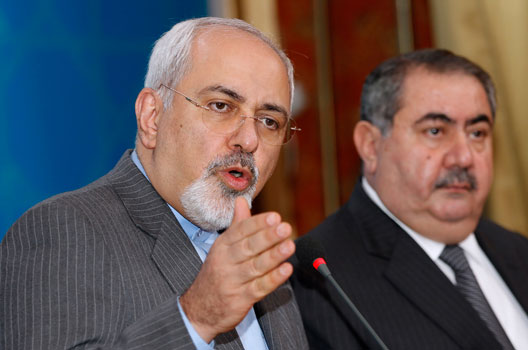 US President-elect Donald Trump must honor the terms of a deal that prevents Iran from making a nuclear weapon, said Madeleine K. Albright, a former US secretary of state and an honorary director of the Atlantic Council’s board, in a meeting with reporters this week.

“I happen to think that it’s a good deal, it was worth doing, and it needs to be followed out. I hope very much that the Trump administration does that,” said Albright, who served in the Clinton administration.

Albright was joined in the meeting on November 28 by Stephen J. Hadley, who served as national security advisor in the George W. Bush administration. Together they serve as co-chairs of the Atlantic Council’s Middle East Strategy Task Force. The task force, which released its final report on November 30, undertook a nearly two-year-long study of issues of state failure and political legitimacy that drive extremism. The report recommends a paradigm shift in the interaction between the international community and the Middle East.

Hadley said that on the task force’s trips to the Middle East in connection with its research, governments that had been critical of the nuclear negotiations with Iran did not voice calls to dismantle the deal.

“We did not hear a call to rip up the deal,” said Hadley. “But we did hear a lot of complaints about failure to confront and deter and contain Iranian nefarious activity.”

“We heard a lot about that and a desire to make sure that the United States takes a more active role and it is not prevented from doing so by the nuclear deal,” he added.

On the campaign trail, Trump promised to “dismantle” what he described as a “disastrous” deal with Iran. His running mate, Mike Pence, promised that a Trump administration would “rip up” the deal. Trump won the election on November 8 and will be sworn in as the next president of the United States on January 20, 2017.

Trump’s nominee for the post of CIA director, Mike Pompeo, is also a staunch critic on the Iran deal. He recently wrote on Twitter: “I look forward to rolling back this disastrous deal with the world’s largest state sponsor of terrorism.”

In an interview with the BBC, published on November 30, CIA Director John Brennan warned Trump that it would be the “height of folly” and “disastrous” to rip up the nuclear deal.

He warned that scrapping the deal would embolden hardliners in Iran and run the risk of other states developing nuclear programs of their own in an effort to counter the threat posed by a nuclear-armed Iran.

Iran’s supreme leader, Ayatollah Ali Khamenei, has said that if the United States tears up the agreement, “we will light it on fire.”

The nuclear deal, formally known as the Joint Comprehensive Plan of Action (JCPOA), was struck between Iran and the P5+1 countries—the United States, the United Kingdom, France, Russia, China, and Germany. It came into effect in October of 2015. In January, the United States, the European Union, and the United Nations lifted nuclear-related sanctions on Iran after the International Atomic Energy Agency (IAEA) certified that Iran was in compliance with the terms of the deal.

The agreement limits Iran’s enrichment program for fifteen years. Restrictions placed on research and development will be eased in about ten years. However, some restrictions will remain for up to twenty-five years.

The deal has garnered prominent support, including from Brent Scowcroft, a former national security advisor to Presidents Gerald Ford and George H.W. Bush. Scowcroft is an Atlantic Council board director and chairman emeritus of the Council’s International Advisory Board.

Albright pointed out that the deal is not a bilateral one between the United States and Iran that can more easily be scrapped. “It is a multilateral deal and I think that it is very important because it has cut off the paths for Iran to develop a nuclear weapon,” she said.

Iranian officials have noted that because the agreement is a multilateral one it will be that much harder to rip up. “Of course Iran’s options are not limited but our hope and our desire and our preference is for the full implementation of the nuclear agreement, which is not bilateral for one side to be able to scrap,” Iranian Foreign Minister Mohammed Javad Zarif said after Trump’s election.

“Every US president has to understand the realities of today’s world,” Zarif said. “The most important thing is that the future US president sticks to agreements.”

Iran continues to pose challenges to its neighbors through its support for Syrian President Bashar al-Assad, the terrorist groups Hezbollah and Hamas, and Houthi rebels in Yemen.

Nevertheless, Albright noted that it was Libya—where the Islamic State has taken root amid the chaos that has prevailed since the ouster of Moammar Gadhafi in 2011—that’s a predominant concern in the Middle East. “The country that people were most afraid of, both in Tunisia and in Egypt, was Libya. They were very concerned about what was happening in Libya,” she said.

Image: “Of course Iran’s options are not limited but our hope and our desire and our preference is for the full implementation of the nuclear agreement, which is not bilateral for one side to be able to scrap,” Iranian Foreign Minister Mohammed Javad Zarif said after Trump’s election. (Reuters/Thaier Al-Sudani)