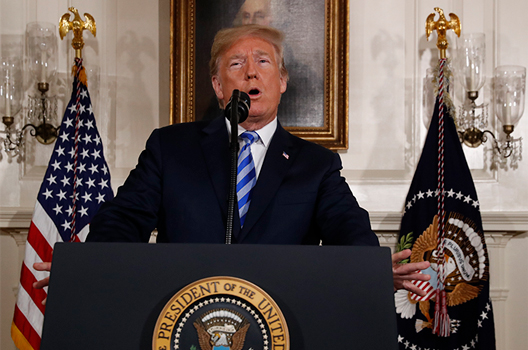 US President Donald J. Trump on May 8 pulled the United States out of the Iran nuclear deal saying the agreement did not satisfactorily address the Islamic Republic’s ability to build a nuclear bomb or limit its “malign activity.” He also signed a memorandum to reimpose sanctions on Iran.

Trump’s decision will likely strain Washington’s ties with its European allies who had urged him to remain in the deal.

“The fact is this was a horrible one-sided deal that should have never ever been made. It didn’t bring calm, it didn’t bring peace, and it never will,” Trump said at the White House.

The president said: “Today, we have definitive proof that this Iranian promise was a lie.”

However, the United Nations’ nuclear watchdog, the International Atomic Energy Agency (IAEA), Western governments, and even senior Trump administration officials, including Secretary of State Mike Pompeo and the Director of National Intelligence Daniel Coats, have said Iran is adhering to its commitments under the deal.

Criticizing the so-called sunset clauses of the deal, under which restrictions on Iran’s ability to produce nuclear fuel for civilian use expire after fifteen years, Trump said: “[E]ven if Iran fully complies [with the deal], the regime can still be on the verge of a nuclear breakout in just a short period of time.”

“If I had allowed this deal to stand there would soon be a nuclear arms race in the Middle East. Everyone would want their weapons by the time Iran had theirs,” he added.

Supporters of the deal believe abandoning it is what would put Iran on the path to producing a nuclear weapon and spark a nuclear arms race in the Middle East.

Laying out his criticism of the deal, Trump said its inspections provisions lacked adequate mechanisms to “prevent, detect, and punish cheating.”

“We cannot prevent an Iranian nuclear bomb under the decaying and rotten structure of the current agreement. The Iran deal is defective at its core. If we do nothing we know exactly what will happen: in just a short period of time the world’s leading state sponsor of terror will be on the cusp of acquiring the world’s most dangerous weapon,” he said.

The Iran deal, formally known as the Joint Comprehensive Plan of Action (JCPOA), was signed by the United States, the United Kingdom, France, Germany, Russia, China, and Iran in 2015.

Critics of the deal say that it does not address Iran’s ballistic missile program or its malign activities in its neighborhood, and that the deal does not cap Iran’s nuclear program in perpetuity. Trump echoed those criticisms in his remarks on May 8.

Trump’s decision is likely to isolate the United States. All the other signatories to the JCPOA, including Iran, had pledged to abide by its terms. More importantly for the United States, leaders of the United Kingdom, France, and Germany had urged Trump not to abandon the deal. Trump’s disregard for their pleas will likely strain the United States’ relationships with its European partners.

In what was perhaps a preview of Iran’s reaction to a US withdrawal from the JCPOA, Iranian President Hassan Rouhani warned on May 6 that if the United States were to leave the deal it would face “regret of historic proportions.”

It is unclear what impact Trump’s decision will have on the deal itself. What is clear is that the threat of US sanctions will deter non-US firms from doing business in Iran. That in and of itself could imperil the agreement.

While Iran is opposed to renegotiating the nuclear deal, Trump offered the possibility of a fresh start.

“The fact is they are going to want to make a new and lasting deal,” said Trump. “When they do I am ready, willing, and able.”

Trump’s decision to ditch the Iran nuclear deal comes days before his summit with North Korean President Kim Jong-un. Denuclearization of North Korea will be at the top of the agenda of that summit. Trump’s Iran deal decision may color North Korea’s approach to the meeting.

Atlantic Council analysts weighed in on Trump’s decision. Here’s what they had to say:

“This is not one of the Trump administration’s better decisions. Unilateral withdrawal by the United States, like that from the Paris climate agreement and the TPP, will only serve to isolate the United States from the key actors in the global community on nonproliferation, and it will not help in the administration’s efforts to negotiate a new deal with North Korea.

“While the deal isn’t perfect (no deal is), it provides important constraints that serve to significantly limit Iran’s ability to pursue a nuclear weapons program.  The world is much better off, and the Middle East safer, with the United States in the deal than outside of it.”

“It was no surprise that Trump decided to reimpose US sanctions on Iran and withdraw the United States from the JCPOA. He did so, however, without offering any alternative for preventing Iran from reinvigorating its nuclear program or a plan for pressuring Iran to halt its ballistic missile proliferation or destabilizing regional activities.

“Trump acknowledged that the United States will need to work with our allies to develop a comprehensive program to go after mutual threats from Iran. But in the same statement, he undermined America’s credibility with those allies, and our European partners’ efforts to reach agreement that not only addresses weaknesses of the JCPOA but also goes after other threats.

“Perhaps as an example of what regional partners anticipate might follow, Israel has put its north on high alert in anticipation of an Iranian response. Unfortunately, it appears we walked away from the tools we had in hand to monitor and prevent Iranian nuclear activity without picking up others in their place.”

“The US decision to leave the Joint Comprehensive Plan of Action (JCPOA) undermines the credibility of the United States among its allies and the international community at a crucial time in which it seeks to negotiate a deal with North Korea in a bid to curb that nation’s nuclear weapons program.

“The [Iran] deal has had continuous and widespread support from the United States’ closest allies as it set a twenty-five-year inspection regime in excess of regular International Atomic Energy Agency safeguard requirements.

“With this decision, President Trump has not only isolated the United States from global consensus, but has bolstered instability in an uncertain region replete with security challenges.

“Although dealt a severe blow, the JCPOA as yet remains intact and there is much that can be done outside of Washington to that effect.”

“What President Trump did today will have long-standing implications for US foreign policy. First, he has fractured the transatlantic relationship. Our European allies were supporters of the deal and wanted to present a united front on Iran to do a follow-on deal addressing some of the flaws in the JCPOA. That’s now gone.

“Second, President Trump made material falsehoods in his speech. Iran is not in violation of the deal. This is the assessment of President Trump’s own intelligence chiefs, the State Department, and the IAEA. Also, President Trump has actually LOST leverage with Iran. He has limited the space in which future Iranian negotiators can engage with American diplomats given that the United States has violated its own commitments under the deal. President Trump has given Iranian hardliners a huge win and sidelined those in Iran who want greater engagement with the West.

“President Trump’s decision makes America and its allies in the region LESS safe. Not more. Iran can theoretically restart elements of its nuclear program that it had mothballed. Currently, the United States and its allies have unprecedented access through IAEA inspections to Iran’s nuclear infrastructure. What the Iranians do next will be anybody’s guess, but this decision makes confrontation with Iran and the United States more not less likely.”

“Trump’s decision to pull out of the JCPOA does not make either strategic or economic sense. Iran is not currently working on nuclear weaponization. US, European and Israeli intelligence agencies agree on that. Even if it were, it is patently false to say that the United States itself could be targeted by potential Iranian nukes. Sanctions snapback will not hurt Iran because the other five signatories to the deal will not go along with that. Further, potential deals for US companies such as Boeing will no longer be possible. There is no incentive here for either Iran or North Korea to respect any agreement with this administration. With his bellicose speech and new national security advisory, we may well slide into war with Iran, which would be long and nasty.”

Matthew Kroenig, deputy director of the Scowcroft Center for Strategy and Security.

“The Iran nuclear deal undermined many US interests and placed Iran on a patient pathway to the bomb. Trump’s bold decision to end the deal today should be followed up by a comprehensive strategy, drawing on all elements of national power and cooperation with allies and partners, to eliminate, not just delay, Iran’s nuclear weapons program.”

Barbara Slavin, director of the Future of Iran Initiative.

“Trump has now carried out his campaign promise to withdraw from the landmark Iran nuclear deal. While he has also promised to negotiate a new agreement, he will likely face an empty table.

“Despite the earnest and even frantic efforts of US European allies to reach side agreements with the United States on Iran’s non-nuclear policies, Trump was not appeased. In his speech, Trump dismissed their efforts and focused on a litany of charges against Tehran. While Trump said the United S and its allies “are unified in our understanding of the [Iranian] threat,” there is no unity, or clarity, about what comes next.

“As so often since he became president, Trump has shown his capacity to destroy the achievements of his predecessors while putting nothing in their place. It is now up to Europe to try to convince Iran to remain in the agreement despite US sanctions. Russia and China, too, will claim the mantle of international leadership while the US further relinquishes its traditional role. Nothing is about to get easier for the Middle East or the world at large. Further, in North Korea, Kim Jong-un will take note and demand more benefits up front before he agrees to any concessions.”

“The JCPOA imposes extraordinary inspections of a known proliferator until 2041. The potential collapse of the JCPOA simply means the world will revert to the pre-2015 status quo, which allowed for Iran to install as many centrifuges as it liked and enrich as much uranium as it felt prudent.

“The US violation also undercuts Europe. The French, in particular, were tough negotiators and improved the JCPOA. This notion that Europe is soft on Iran because they want to cash in and do more business is silly. Europe supports the JCPOA because it is a good agreement. The United States is all alone here.

Image: US President Donald Trump arrives to announce his decision whether or not to withdraw from the JCPOA Iran nuclear agreement in the Diplomatic Room of the White House in Washington, U.S., May 8, 2018. (REUTERS/Jonathan Ernst)