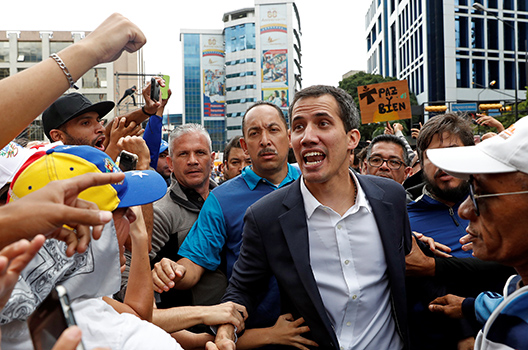 Announcing his decision on January 23, Trump said: “In its role as the only legitimate branch of government duly elected by the Venezuelan people, the National Assembly invoked the country’s constitution to declare Nicolas Maduro illegitimate, and the office of the presidency therefore vacant.  The people of Venezuela have courageously spoken out against Maduro and his regime and demanded freedom and the rule of law.”

Jason Marczak, director of the Atlantic Council’s Adrienne Arsht Latin America Center, said: “Juan Guaidó as interim president is in line with the constitution since Maduro is not the legitimate president given the fraudulent ways in which he secured a new term.”

Paula Garcia Tufro, the deputy director of the Latin America Center, agreed saying, “today marks a critical milestone, as Venezuelans across the political spectrum stand firm in their demand for a return to the constitutional order and in their support for the legitimate mandate of National Assembly President Juan Guaidó as the interim president of Venezuela.”

“The popular movement underway in Venezuela today is a critical first step toward realizing that vision for a return to a stable and prosperous Venezuela. The international community must seize this opportunity and help facilitate a peaceful and lasting democratic transition in Venezuela,” she added.

Maduro was elected to a second term on May 20, 2018, in an election Venezuelan opposition leaders, the United States, and other countries in the region and around the world consider illegitimate.

Trump said he would “continue to use the full weight of United States economic and diplomatic power to press for the restoration of Venezuelan democracy.” He encouraged other governments in the Western Hemisphere to recognize Guaidó as the interim president of Venezuela. “[W]e will work constructively with them in support of his efforts to restore constitutional legitimacy,” he said.

“The world must support the Venezuelan people at this critical moment,” said Marczak. “US support has been critical and will continue to be. But so is the strong support from Venezuela’s Latin American neighbors, the European Union, and the broader international community.”

“By supporting the constitutionally mandated process underway, the international community is betting on the future of Venezuela and reaffirming that that future is not contingent on any one individual or number of individuals but is driven by a popular belief in the promise offered by a return to democracy in Venezuela,” Tufro said.

Trump said his administration will “continue to hold the illegitimate Maduro regime directly responsible for any threats it may pose to the safety of the Venezuelan people. He added: “As Interim President Guaido noted yesterday: ‘Violence is the usurper’s weapon; we only have one clear action: to remain united and firm for a democratic and free Venezuela.’”

US Secretary of State Mike Pompeo said that the US calls on “Maduro to step aside in favor of a legitimate leader reflecting the will of the Venezuelan people.”

Trump’s announcement came as protests against Maduro’s regime have gained momentum following his inauguration for a second term on January 10.

Earlier, in Caracas, Guaidó declared himself interim president before thousands of cheering supporters.

“Hundreds of thousands of Venezuelans have come together today—across the ideological spectrum—in cities across Venezuela in an unprecedented show of support for a return to democracy,” Marczak said. “Today is not a repeat of the 2017 protests. The January 23 context is vastly different. It’s a national movement but with broad backing from the international community.”

Opposition parties control the National Assembly in Venezuela, but the legislature’s powers were significantly curbed by the supreme court and the Maduro regime in spring 2017. These actions sparked widespread protests at the time.

January 23 marks the anniversary of the fall of Venezuelan military dictatorship in 1958 and is being used by the opposition in Venezuela to protest Maduro’s rule. Tens of thousands of Venezuelans took to the streets to demand Maduro step down.

Following the fraudulent election in May 2018, the National Assembly labelled Maduro a “usurper” on January 15 and Guaidó emerged as a potential interim president.

On January 22, US Vice President Mike Pence tweeted a video addressed to the Venezuelan people in which he described Maduro as “a dictator with no legitimate claim to power. He has never won the presidency in a free and fair election, and has maintained his grip of power by imprisoning anyone who dares to oppose him.” Pence also affirmed US support for Guaidó, saying that the National Assembly is the “last vestige of democracy” in Venezuela.

As the good people of Venezuela make your voices heard tomorrow, on behalf of the American people, we say: estamos con ustedes. We are with you. We stand with you, and we will stay with you until Democracy is restored and you reclaim your birthright of Libertad. pic.twitter.com/ThzIAqBoRn

Maduro vowed a “revision” to US ties following the Pence video. It is unclear how the Maduro regime will respond to the US move to recognize Guaidó.

“Guaidó is a courageous leader who has ably unified opposition interests at this critical moment,” Marczak said. “The US and the rest of the world’s democracies stand at a critical juncture today—a moment to redefine the future of Venezuela.”

Maduro has presided over a spectacular economic collapse in Venezuela, an oil-rich nation. Food and medicine are in short supply. Previously controlled diseases, such as malaria, are breaking out in the most populous areas at levels not seen in the past seventy-five years.

A national door-to-door poll conducted by the Atlantic Council in Venezuela in March 2018 found that more than eight in ten Venezuelans believe that the country is mired in a humanitarian crisis, more than nine in ten Venezuelans consider food and medicine supply to be insufficient. Chavistas were among those polled.

Image: Juan Guaido, President of Venezuela's National Assembly, reacts during a rally against Venezuelan President Nicolas Maduro's government and to commemorate the 61st anniversary of the end of the dictatorship of Marcos Perez Jimenez in Caracas, Venezuela January 23, 2019. (REUTERS/Carlos Garcia Rawlins)