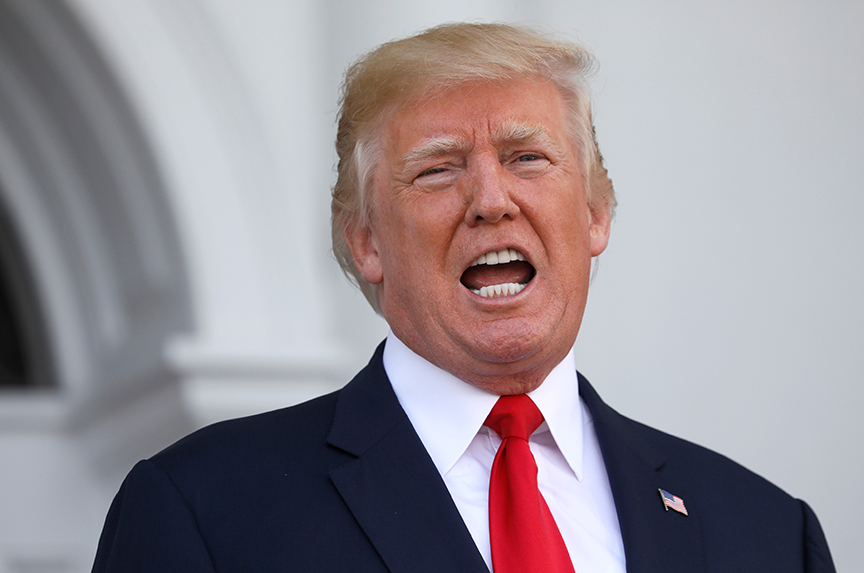 US President Donald J. Trump should ratchet down his rhetoric on North Korea and instead devote his energy to working with the international community to isolate Pyongyang, according to the Atlantic Council’s Robert A. Manning.

“There is no imminent threat of attack from North Korea; there is no crisis,” said Manning, a resident senior fellow in the Atlantic Council’s Brent Scowcroft Center on International Security. “This is all in Donald Trump’s head. I don’t see how we benefit from ratcheting up tensions.”

“It is irresponsible, dangerous, and counterproductive; and it is unfortunate because I think the actual thrust of the policy is going in the right direction,” he added.

Trump has steadily ratcheted up his rhetoric on North Korea. On August 10, he said his earlier vow to rain down “fire and fury” on North Korea in response to Pyongyang’s efforts to build and launch a nuclear weapon “wasn’t tough enough.” On August 11, Trump tweeted “military solutions are now fully in place, locked and loaded, should North Korea act unwisely.”

North Korea has responded to Trump’s rhetoric by vowing to attack the US Pacific territory of Guam.

On August 5, the United Nations Security Council unanimously passed tough sanctions in response to North Korea’s two recent tests of inter-continental ballistic missiles (ICBMs). Noting this achievement, which was supported by North Korea’s main ally, China, Manning said: “Now is the time to shut up and actually implement the policy.”

Q: What are your thoughts on the saber rattling that is taking place between the United States and North Korea?

Manning: There is no imminent threat of attack from North Korea; there is no crisis. This is all in Donald Trump’s head. I don’t see how we benefit from ratcheting up tensions. It is unfortunate because we just won this great victory in the UN Security Council where the Russians and Chinese supported very tough sanctions. Now is the time to shut up and actually implement the policy.

The other problem is you have this incredible strategic incoherence [in the Trump administration]. About a week ago, [US Secretary of State Rex] Tillerson gave a very reasonable explanation of what he thought the policy was. Then the same day [South Carolina Republican Sen.] Lindsey Graham comes out and says Trump has drawn a red line for North Korea. Then the  CIA director [Mike Pompeo] came out saying we should look at regime change. And then the National Security Advisor [H.R. McMaster] was using the term “preventive war” as an option. It is one thing to say all options are on the table, it’s another to spell out those options. The North Koreans understand we are the most powerful country on Earth and we can destroy them. They don’t need Donald Trump borrowing Kim Jung-un’s speechwriter.

It is irresponsible, dangerous, and counterproductive; and it is unfortunate because I think the actual thrust of the policy is going in the right direction.

The rhetoric is counterproductive because it reinforces North Korea’s narrative that the “nasty imperialists have a hostile policy and they are going to attack us.” So, of course, the North Koreans are going to support their leader and feel the need to have nuclear weapons. How can we have a denuclearization policy when what you are doing is essentially making the case for North Korea that they don’t want to be Libya or Iraq?

Manning: As Tillerson laid it out, but nobody, including his own White House, seems to want to listen to him. We want to mobilize international support increasing pressure and sanctions, freezing North Korea out of the international financial system.

North Korea has a big problem in trying to get a sophisticated supply chain for components for nuclear weapons. We’re pretty good at finding when ships and planes are being loaded and moving. We have an opportunity to work with China—and I think the Chinese will cooperate on this—to disrupt the North Koreans’procurement network and thus their missile and nuclear program, and not just through cyber. Those are the kinds of things we should be quietly focusing on.

Q: Why is North Korea so eager to develop nuclear weapons?

Manning: At this point it has become part of their identity. They changed their constitution to define themselves as a nuclear state.  It’s essentially a terror-enforced police state. They watched what happened in Serbia, Libya, Iraq. They have been working on nuclear weapons for probably thirty years.

I am worried about what they are doing now because their program and the breakneck speed at which they are trying to develop nukes goes beyond deterrence. If I’m North Korea and I have four or five nukes then I have an insurance policy against the Americans attacking me. But what he’s doing is building a very sophisticated multilayered dyad, possibly a triad with a submarine launched missiles. You have to wonder what is his intention. Is it to use the threat of limited nuclear war to push the United States off the [Korean] peninsula? Or to try to prevent the US from acting if they attack South Korea?

Kim has a friendly government in the south. They have made every effort to move forward on North-South reconciliation. And what has [South Korean President] Moon [Jae-in] gotten for it? Silence and two ICBM tests since he took office. They did the same thing to [former US President Barack] Obama.

Kim has a very clear trajectory. He wants an ICBM as soon as he can get one. What he does at that point I do not know. The most benign interpretation is that it’s the ultimate insurance policy if you can attack the US mainland.

If they have miniaturized the warhead, which the intelligence community claims they have succeeded in doing, they can put it on a medium-range No-dong missile and hit US bases in South Korea and Japan.

Q: Have sanctions been an effective tool?

Manning: People say sanctions haven’t worked with North Korea. My argument is, we haven’t really tried them. If we look at the sanctions on North Korea—compared to those imposed on Iran—up until recently they are very small, targeting companies and individuals. Now we have a resolution that bans all exports of coal, iron, fish. It is starting to get serious. We can do more unilaterally to make it even tougher.

The problem is that Trump acts likes an eight-year-old seeking instant gratification. Whatever we do it is not going to happen overnight. If China does something to help us, this stuff takes time to play out.

Trump’s reactions make our allies uncomfortable. They think Trump is going to launch an attack and who is going to get attacked? South Korea.

Q: If sanctions prove ineffective is regime change the answer?

Manning: There is no opposition. Kim has killed off everyone in opposition—starting with his uncle and his brother, whom China had as Plan B if something happened to Kim. I don’t know how you’d do regime change other than by invading the country, and I don’t think that is an option.

Q: The UN Security Council passed unanimous sanctions on North Korea earlier this month. Is China distancing itself from Pyongyang?

Manning: It appears to me that they are willing to go further than they have gone before. On this you might give Trump a little credit. In what he’s doing he’s kind of using [former US President Richard] Nixon’s “madman theory” and scaring China that this guy is carzy enough  to start a war on our border.

China’s number one concern is stability on its border, not nukes. If they have to choose between nukes and instability, instability is their priority. They won’t go so far as doing anything they think would contribute to instability. But there is considerable distance between where we are now and sanctions that risk instability. There have been some signals from China that if the North Koreans did another nuclear test Beijing might cut off some, not all, of North Korea’s oil.

The effectiveness of sanctions depends quite a bit on China being willing to enforce them. It’s not just China. There are North Korean procurement networks in Malaysia and Singapore. I was hoping Tillerson would use his ASEAN [Association of Southeast Asian Nations] meetings to put them on notice. There is no reason why ASEAN countries should allow North Korean businesses to operate. There is only one explanation: corruption—they’ve bought some bureaucrat or politician off. Everybody talks about China, nobody talks about the other countries involved like Russia and Russian banks. If we are serious, we really have to come down hard on this kind of stuff.

Q: What should we be watching for in the coming weeks?

Manning: I hope we will see a ratcheting down of this crisis atmosphere because there isn’t a crisis. They are testing weapons. With this frenzy you could forgive the average American for thinking that “Oh my God, they’re getting an ICBM and the minute they get it they are going to fire at Los Angeles!”

Deterrence works and it is being unappreciated. North Korea is about regime survival. They are not suicidal. That’s not going to change. We have a window to try to make this policy work.

Trump needs to discover his inner Teddy Roosevelt. I understand that is a tall order.

Image: US President Donald J. Trump, speaking to reporters at his golf estate in Bedminster, New Jersey, on August 10, ramped up his rhetoric on North Korea. (Reuters/Jonathan Ernst)