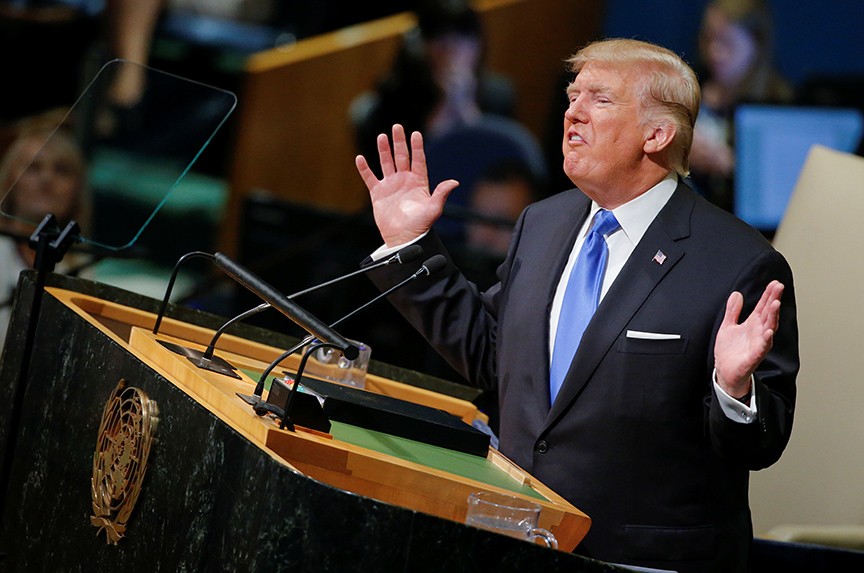 In his first address to the United Nations General Assembly in New York on September 19, US President Donald J. Trump threatened to “totally destroy” North Korea, called Iran a “rogue nation” and the nuclear deal with that country “an embarrassment,” said the United States was “prepared to take further action” on Venezuela, and lashed out at what he called a “corrupt, destabilizing” regime in Cuba.

Atlantic Council experts provided their analysis on the speech. Here is what they had to say:

This was President Trump’s version of the “axis of evil” speech on steroids.

Sovereignty in our era fundamentally requires close cooperation with other nations and with strong global institutions, which President Trump rejects. Strong, sovereign, independent nation states appear to be the core principle of this new Trump Doctrine.  However, without rules to guide behavior among those nation states (the global order) and without deep cooperation with others on trade, security, technology, and other core issues, this approach would lead to global chaos.

The United States must cooperate closely with other nations and global institutions to be secure and to prosper.

On North Korea, what does President Trump hope to achieve by continuous rhetorical escalation? And on Iran, if President Trump were to pull out of the nuclear deal, that would only serve to isolate the United States.

The speech was more than a missed opportunity to demonstrate a coherent vision, it revealed the lack of such a vision and the internal contradictions that undermine the administration’s international posture. It tried but did not succeed in bridging the concepts of sovereignty/“America first” and the need for effective international instruments and coalitions—a need which Trump acknowledged, but did little to actually encourage.

Those instruments, and especially the “coalitions of strong, independent, sovereign nations” on which Trump says he is relying, require confidence in American leadership and reliability, and American regard for others, which the speech, unfortunately, with its internal confusion, sermonizing, self-congratulation, and belligerence, did not engender. I expect there will be much shaking of heads among our friends and allies.

Listening to the president, I had foreboding sense of deja vu. His remarks about “rogue regimes” was reminiscent of George W. Bush’s “axis of evil” rhetoric, which destroyed prospects for cooperation with Iran on both regional and nuclear topics fifteen years ago and also undercut diplomacy with North Korea.

While Trump’s criticism of some of Iran’s domestic and foreign policies is certainly valid, his insults of a sovereign government are counterproductive and his denigration of the Joint Comprehensive Plan of Action (JCPOA) was unwarranted and unwise. For all its faults, Iran has voluntarily curbed its nuclear program and won acceptance under international law. The JCPOA is not “embarrassing” and to walk away from it unilaterally would be a grave mistake that will only encourage the deal’s hardline opponents in Iran and undermine the prospect of any negotiated solution with North Korea.

It was a speech more geared toward the fringe elements of Trump’s base than the leaders of the world. Besides threatening annihilation of North Korea, he essentially advocated for a policy of regime change in Iran and was confrontational toward Venezuela.

There was not much in there about respect for multilateral agreements and institutions. It was the US president getting up there and pounding on the podium: “America First.” By drilling down on what America First actually means, he was giving a big finger to the international community.

For all the hype, fear, and loathing of Donald Trump going head-to-head with the very embodiment of the “globalism” he disdains, Trump’s speech to the UN General Assembly, despite some dumb rhetorical excesses and his distinct “America First” approach to the world, was not quite the disaster his critics expected.

Not surprisingly, there were more than a dozen references to “strong sovereign states” and respect for “sovereignty,” yet the word “multilateral” was carefully avoided. Nonetheless, Trump was surprisingly respectful of the UN as an institution. Trump’s outline of his hopes that the UN could help address the world’s crises and his concerns about its inefficiency were on a par with previous US presidential addresses.

The fire-breathing verbiage that stole the headlines, that the US might “have no choice but to totally destroy North Korea,” was actually nothing new. Trump’s threat was taken out of context. The media seemed to miss that it was preceded by a key qualifier: “if forced to defend itself or its allies.” Though usually stated less bluntly, and avoiding insults like “Rocket Man,” US presidents from Clinton and Bush to Obama have made it clear that if Pyongyang attacked the United States, South Korea or Japan, it would trigger an overwhelming US/ROK response, reunifying Korea by force.