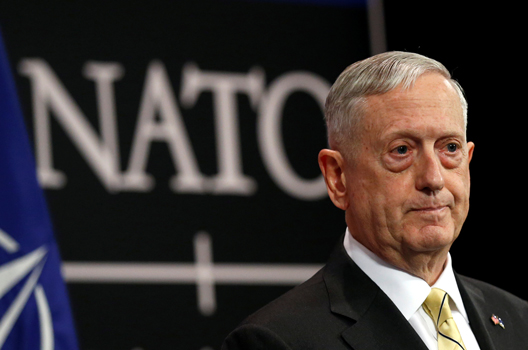 US President Donald J. Trump’s proposal to ramp up defense spending at the cost of foreign aid is attracting flak from within his Republican Party and retired generals who believe such a move is not in the United States’ best interests.

Trump is reportedly seeking $54 billion over the sequester caps imposed by the 2011 Budget Control Act, putting defense spending in 2018 at $603 billion. This proposed increase would come at the cost of State Department and United States Agency for International Development (USAID) funding.

Matt Moore, chairman of the Republican Party in South Carolina, told the New Atlanticist in an interview that these cuts would be “disastrous for American security.”

There is broad consensus in Congress and the Pentagon that addressing the military’s readiness shortfalls—its ability to rapidly respond to crises—must be a priority.

“We agree with the Reagan principle of peace through strength,” said Moore. “There is no doubt that America’s military needs more readiness, we just don’t think it should be done on the back of cutting foreign aid programs and overseas investments that demonstrably increase our national security.”

Foreign aid represents only one percent of the US budget. That investment has a “demonstrable return on investment keeping America safe,” said Moore.

“America cannot retreat to its shores when the world is in crisis,” said Moore. “Good guys rarely fill the vacuum. If we don’t fill that vacuum someone else will. The world needs American leadership that supports human rights and democracy.”

An overreliance on the military would severely limit America’s ability to resolve crises through diplomacy. US Defense Secretary James Mattis, while head of the US Central Command, contended: “If you don’t fully fund the State Department, then I need to buy more ammunition.”

Republicans have traditionally supported the principle that foreign aid and global engagement help safeguard US national security, said Moore. Sen. Lindsey Graham (R-SC) said Trump’s budget outline is “dead on arrival” and that proposed cuts to State Department funding “would be a disaster.”

Moore is leading a new engagement effort at the US Global Leadership Coalition, which recently coordinated a letter signed by 121 retired three- and four-star military leaders who oppose cuts to the State Department budget and foreign assistance.

In the letter addressed to congressional leadership, the retired servicemen express their “strong conviction that elevating and strengthening diplomacy and development alongside defense are critical to keeping America safe.”

“We know from our service in uniform that many of the crises our nation faces do not have military solutions alone – from confronting violent extremist groups like [the Islamic State of Iraq and al-Sham] ISIS in the Middle East and North Africa to preventing pandemics like Ebola and stabilizing weak and fragile states that can lead to greater instability,” they add. The signers include retired Gen. Keith Alexander, former director of the National Security Agency and head of U.S. Cyber Command; retired Gen. John Allen, former commander of NATO International Security Force and U.S. Forces-Afghanistan; and retired Adm. James G. Stavridis, former NATO Supreme Allied Commander.

Trump has touted his defense budget as one “that rebuilds the military” and “calls for one of the largest increases in national defense spending in American history.” However, it’s only 3 percent more than former US President Barack Obama’s final budget request.

Sen. John McCain (R-AZ), chairman of the Senate Armed Services Committee, has called for a much larger increase—nearly $640 billion for fiscal year 2018. “President Trump intends to submit a defense budget that is a mere 3 percent above President Obama’s defense budget, which has left our military underfunded, undersized, and unready to confront threats to our national security,” McCain said in a statement. “With a world on fire, America cannot secure peace through strength with just 3 percent more than President Obama’s budget. We can and must do better.”

Moore is confident, however, that Congress will see the value of foreign aid and overseas investments. Trump’s budget is “simply a framework,” he noted.

McCain, in fact, told reporters he is “very much opposed” to proposed State Department budget and aid cuts. “So many of those programs are very important. They’re a popular target, but they’re very important,” he said.

Moore cited “countless examples” of how foreign assistance programs help American taxpayers. It is “only a matter of time before the next pandemic threatens to leave a foreign country’s borders,” he said, adding, “American doctors and American investments can help to prevent that pandemic.”

Moore cited East Africa—Ethiopia, in particular, which he visited in 2014—as a success story of US foreign aid and investment. “Foreign aid is not a zero-sum game when it is done correctly. All involved benefit,” he said.

US investments, for example, help train farmers in East Africa. “When these farmers have productive crops, and are able to support their families, they are much less likely to become terrorists,” said Moore.

Image: US Defense Secretary James Mattis, while head of the US Central Command, contended: “If you don’t fully fund the State Department, then I need to buy more ammunition.” (Reuters/Francois Lenoir)