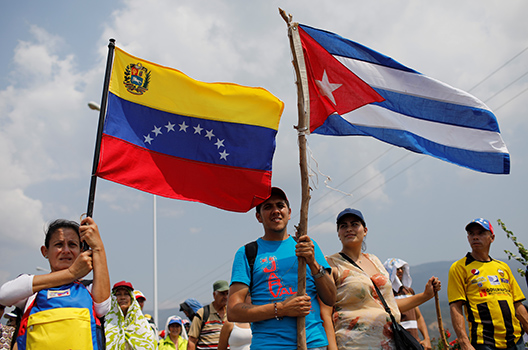 The Trump administration broke another policy precedent with its March 4 decision to activate a decades-old US law on Cuba, ostensibly to punish Cuba for propping up Nicolás Maduro’s regime in Venezuela and for its ongoing suppression of human rights, as well as to put additional pressure on Maduro to step down. The unilateral policy decision threatens to further antagonize key US allies, particularly the European Union (EU) and Canada—both of whom have otherwise been largely consistent with the Trump administration on Venezuela policy—while likely stopping short of achieving the desired impacts on Havana and Caracas.

For the first time since enactment of the 1996 Cuban Liberty and Democratic Solidarity (Libertad) Act, the Trump administration is allowing lawsuits to be brought in US courts under Title III of this law. Title III allows US nationals whose property in Cuba was confiscated by the Castro regime following the 1959 Cuban revolution to bring federal court actions against foreign entities “trafficking” in (i.e. using) those properties. Title III has never been used, as every president since the law’s passage has suspended it. The main rationale for this consistently bipartisan approach was that it would have negative repercussions on allies and partners.

For now, claims under Title III are restricted to a defined list of Cuban entities and the ban on lawsuits against foreign firms operating in Cuba remains suspended until at least April 17. The Trump administration indicated that it would use the coming month to review the impact of its decision on US national interests and expediting a return to democracy in Cuba. If there are any lessons to be learned from US sanctions on the Maduro regime, a key takeaway is that ratcheting up sanctions is unlikely to facilitate such timely and tangible results.

Since the lifting of EU sanctions on Cuba just over a decade ago, European firms have capitalized on the opportunity to pursue business ties with the island. Canada, which has maintained uninterrupted diplomatic relations with Cuba since 1945, has also seen its companies expand their economic ties to the island.

Following US Secretary of State Mike Pompeo’s announcement of a reduced scope suspension of Title III and the likelihood of further Cuba policy changes, US and foreign firms operating in Cuba should immediately be assessing whether the shift in policy may impact them. The potential ripple effect on foreign firms, particularly European and Canadian firms, is substantial. Such firms include hoteliers, airlines, cruise companies, and mining companies.

Although the current scope of Title III does not apply to such firms, this could change as early as April, should the Trump administration choose, and would then implicate both domestic and foreign companies. Such a decision would likely prompt further friction between the Trump administration and Europe and Canada. In addition to the possible litigation by US claimants, there will also likely be legal challenges over the legitimacy of the Libertad Act itself and the way it is being applied, which could take years to resolve.

The EU originally introduced blocking legislation in 1996 to shield its companies from the extraterritorial effects of Title III and is likely to invoke it again if the full suspension of Title III is lifted.  (This is the same legislation that the EU recently amended in an effort to mitigate the extraterritorial impacts of US sanctions on Iran following Trump’s unilateral withdrawal from the Iran nuclear deal.) When the blocking statute was introduced, the EU accompanied it with a dispute process against the United States at the World Trade Organization (WTO). The dispute was eventually resolved bilaterally, with then US President Bill Clinton agreeing not to enforce the extraterritorial aspects of the Libertad Act and the EU agreeing to toughen its stance on Havana and withdrawal its WTO claim.

Bilateral relations between Washington and Brussels—already strained due to differences in policy toward Iran, trade, and other issues—are not as well poised for such bilateral negotiations. Further, the Trump administration’s view of the WTO and its role in resolving such disputes (should that be necessary) has also shifted, complicating a negotiated settlement to the heightened tensions.

The United States has maintained sanctions on Cuba longer than any other country. While sanctions often take time before they facilitate their intended policy objective, there is no evidence over the past half century of Cuba sanctions that further ratcheting up the embargo is likely to bring about the shift to democracy and respect for human rights that the Trump administration is rightfully seeking. There is a sound argument that those with recognized, legitimate claims to confiscated property be compensated; however, this is most effectively managed through a negotiated process, with which the US government has had some success in other contexts.

While the Trump administration is right to support human rights and shifts to democracy in both Cuba and Venezuela, this is a shortsighted, ineffective way to achieve such laudable policy objectives. Exacerbating tensions with European and Canadian allies through activating Title III will quell any appetite for coordination on Cuba policy and threatens to weaken an otherwise strong alliance on Venezuela policy. Instead, renewing the suspension of Title III is a strategic way to maintain coordinated pressure on Maduro and avoid another angle to the simmering conflicts with key allies.

Samantha Sultoon is a senior fellow with the Atlantic Council’s Global Business and Economics Program and the Scowcroft Center for Strategy and Security.

Image: Pro-government supporters wave Venezuelan and Cuban flags as they gather at the Tienditas cross-border bridge between Colombia and Venezuela for a three-day event to compete against Branson-backed concert for Venezuela aid, in Tienditas, Venezuela February 22, 2019. (REUTERS/Marco Bello)