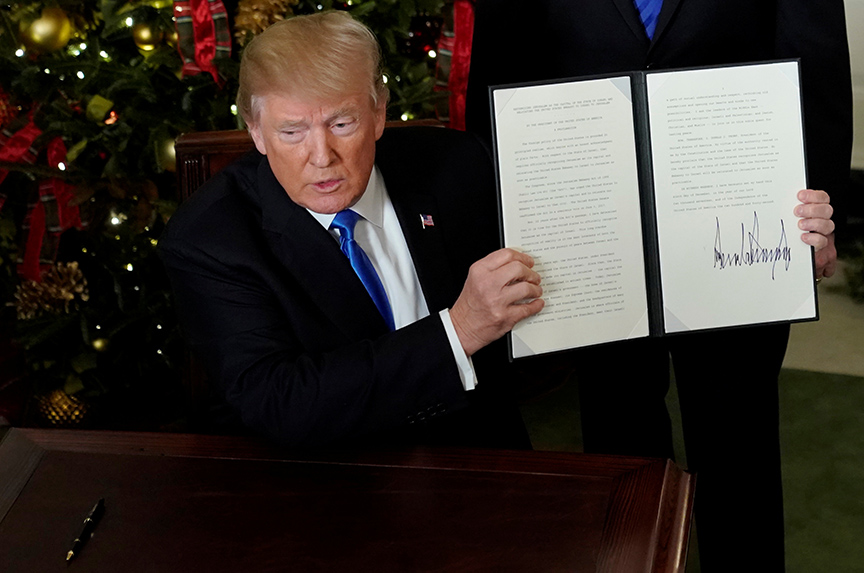 Recognition of Jerusalem as Israeli capital does not advance the interests of the United States or the region, said James Cunningham, a former US ambassador to Israel

US President Donald J. Trump’s decision to reverse almost seven decades of US policy and recognize Jerusalem as the capital of Israel is “potentially, a pretty serious mistake,” said James B. Cunningham, a nonresident senior fellow at the Atlantic Council.

“If you’re going to upend decades of US policy, it ought to be for a good reason and for a significant political and diplomatic gain. I don’t see that either of those two are attained here,” said Cunningham, who served as the United States’ ambassador to Israel from 2008-2011.

Trump’s announcement will boost the Israeli position, “but it doesn’t change the reality that the status of Jerusalem as a capital for Israel and the Palestinians is a core issue for negotiations that will need to be addressed no matter what we say,” he added.

In his White House announcement on December 6, Trump also said that the US Embassy would be relocated from Tel Aviv to Jerusalem. The United States is now the only country to recognize Jerusalem as the capital of Israel.

In the days leading up to the announcement, Arab and European leaders, and even Pope Francis, warned and urged Trump not to go ahead with the recognition. The announcement, while praised by Israeli Prime Minister Benjamin Netanyahu, was met with widespread international condemnation.

Israel claims Jerusalem in its entirety as its “eternal, undivided” capital, while the Palestinians claim East Jerusalem as the capital of a future Palestinian state. Jerusalem’s holy sites are revered by Jews, Muslims, and Christians alike.

The Israeli government officially considers Jerusalem to be its capital. Israel’s parliament, president, prime minister, and most ministries are based in Jerusalem. All foreign embassies, however, are based in Tel Aviv.

In 1995, the US Congress mandated for the US Embassy to be in Jerusalem. For more than two decades, US presidents—Republicans as well as Democrats—have signed a waiver every six months that allows them to delay moving the US Embassy from Tel Aviv to Jerusalem on national security grounds.

On the campaign trail, Trump vowed to move the US Embassy, but signed the waiver in June. On December 4, he missed the deadline to sign the waiver.

Explaining his decision on Jerusalem, Trump said at the White House: “We cannot solve our problems by making the same failed assumptions and repeating the same failed strategies of the past.  Old challenges demand new approaches.”

He added that he had “judged this course of action to be in the best interests of the United States of America and the pursuit of peace between Israel and the Palestinians.”

Trump has entrusted his son-in-law and senior adviser, Jared Kushner, with the task of striking a peace deal in the Middle East. Kushner and Jason D. Greenblatt, the president’s special envoy, have been working for months on this task.

Trump affirmed US commitment to facilitating a peace agreement between the Israelis and Palestinians “that is acceptable to both sides.”

Cunningham, however, said Trump’s decision will raise questions among US partners in the Middle East about a US role in any future peace process. “It is not at all clear from what the president said today that this step fits into any strategy or what strategic goals it attempts to advance,” he said.

James B. Cunningham spoke in a phone interview with the New Atlanticist’s Ashish Kumar Sen. Here are excerpts from our interview.

Q: What are your thoughts on President Trump’s decision to officially recognize Jerusalem as the capital of Israel?

Cunningham: I think it is a mistake and, potentially, a pretty serious mistake. If you’re going to upend decades of US policy, it ought to be for a good reason and for a significant political and diplomatic gain. I don’t see that either of those two are attained here.

Q: Can the United States be trusted as an honest broker if it takes sides on an issue so central to the Arab-Israeli disagreement?

Cunningham: I think so. I don’t think that there is anybody else who can play the kind of role that we have played and could play.

Whether this administration can play that role has been questionable. This [announcement] will raise more questions among not just the Palestinians, but in the international community more broadly.

There are a lot of partners who have spent a lot of time and energy with us trying to come to a conclusion in the Middle East and this will raise questions for all of them about what role the United States will play in the future.

Q: What challenges will this create for the effort by Jared Kushner and Jason Greenblatt to prepare a Middle East peace plan?

Cunningham: If you’re going to do something like [Trump’s announcement] it ought to be in the context of a strategy where there is a significant gain to be had. I don’t know what they think they are doing in formulating an approach to Middle East peace, but it is not at all clear from what the president said today that this step fits into any strategy or what strategic goals it attempts to advance.

Q: With his announcement, has the president give up any bargaining power?

Cunningham: The question is one of seriousness of purpose. Having a strategic vision and implementing that vision that’s what will be called into question. The bargaining will be done between the Israelis and the Palestinians and others if they get that far.

This will be seen as a boost for the Israeli position, but it doesn’t change the reality that the status of Jerusalem as a capital for Israel and the Palestinians is a core issue for negotiations that will need to be addressed no matter what we say.

Q: Does Trump’s recognition of Jerusalem give him the capital to put pressure on Israel to make territorial concessions in any future Israeli-Palestinian negotiation?

Cunningham: If that were the case it would be quite foolish to play that hand now. That’s the kind of thing that you do confidentially between the negotiating partners. I don’t see any sign that this is anything except a symbolic statement that will be seen by many in Israel as a boon to them, but it is not going to influence the prospects of negotiations one way or the other. There are, of course, no negotiations at this time.

Q: How will this announcement play out among the two rival Palestinian factions—the militant Hamas in the Gaza Strip and the more moderate Fatah in the West Bank? Will it diminish support for Fatah among Palestinians?

Trump tried to have it both ways by saying that this shouldn’t be seen as undercutting final status issues. That is going to be a hard argument for any Palestinian or Arab leader to accept and to defend to their people.

[Trump’s announcement] will make the position of the more moderate Palestinians much more difficult and complicated.

Q: Does it make it harder for Arab leaders to support a peace plan now that the United States has changed the parameters?

Cunningham: It is going to make it more difficult for all of our Arab friends and it is going to complicate efforts to generate a common sense of purpose and direction in the region that includes Israel tacitly or overtly. It is also going to provide ammunition to our adversaries who will seek to exploit this for their own ends.

Q: President Trump has made fighting Islamic extremism a priority. Could his statement on Jerusalem undercut that priority?

Cunningham: This statement certainly will not help the United States and its partners to address that challenge. [Fighting Islamic extremism] is our priority and the priority of countries in the region, but it will complicate our ability to move ahead with that because our adversaries—both countries and ideological movements—will seek to exploit this to undercut the role of the United States and its friends in the region and to try to shift the focus to Israel instead of on Islamic extremism, which is the principle threat to the region.

Image: US President Donald J. Trump displayed a signed executive order at the White House on December 6 after he announced that the United States would recognize Jerusalem as the capital of Israel. (Reuters/Jonathan Ernst)