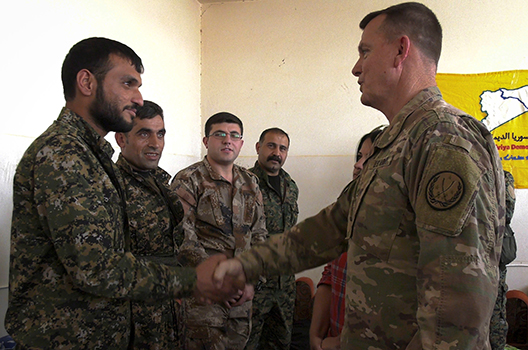 If true, reports that US President Donald J. Trump is ordering the prompt withdrawal of US military forces from eastern Syria could upend his administration’s Syria strategy and hand a thoroughly unearned victory to Iran, Russia, and the Assad regime. The White House has just released the following statement:

“Five years ago, ISIS was a very powerful and dangerous force in the Middle East, and now the United States has defeated the territorial caliphate. These victories over ISIS in Syria do not signal the end of the Global Coalition or its campaign. We have started returning United States troops home as we transition to the next phase of this campaign. The United States and our allies stand ready to re-engage at all levels to defend American interests whenever necessary, and we will continue to work together to deny radical Islamist terrorists territory, funding, support, and any means of infiltrating our borders.”

The statement leaves unanswered some key questions. ISIS has not—contrary to the statement—been militarily terminated in Syria by the anti-ISIS Global Coalition: something to which the United States Department of Defense will attest. Will the unfinished military campaign against ISIS in Syria continue?  Will the Kurdish-led Syrian Democratic Forces (SDF) continue to provide the ground power in that campaign with the assistance of US-led combat air support? Objectively speaking, how important are the estimated 2,000 US advisers to the prosecution of the campaign? What is meant by “the next phase of this campaign?” Will the United States still consider the Euphrates River to be a no-go line for regime, Russian, and Iranian-commanded militia units not to cross? Will a US-coordinated stabilization program aimed at sealing the eventual military victory over ISIS gain momentum or be terminated? Where will Turkey’s policy for eastern Syria land on a spectrum ranging from non-intervention to taking it over?

Until these questions (and others) are answered by the US interagency, speculating about the policy implications of a tweet-launched initiative will be perilous. In terms of process there is much media reporting suggesting that Trump is essentially unmoored from the US national security interagency apparatus. If true—if he is using Twitter in a manner disconnected from the national security establishment over which he presides—then this would be an urgent matter to be rectified by the incoming White House chief of staff, the assistant to the president on national security affairs, and the principal Cabinet officers.

In the wake of last July’s Helsinki Summit between Trump and Russian President Vladimir Putin, US officials had to work hard to convince Trump that the rapid withdrawal of US forces from eastern Syria would truncate the battle against Islamist extremism and empower those forces—the Assad regime and Iran, in particular—that breathe oxygen into the lungs of extremism through mass homicide and open sectarianism. Today’s announcement might well reflect a change of policy that would reward those forces and lay waste to nearly five years of US effort against ISIS. Or it may reflect step one in reeling the president back into the careful deliberations of the national security system over which he presides. The betting here—which may well be wrong—is that it is the latter.

Frederic C. Hof is a nonresident senior fellow in the Atlantic Council’s Rafik Hariri Center for the Middle East. He served as special adviser for transition in Syria in the Obama administration. Follow him on Twitter @FredericHof.