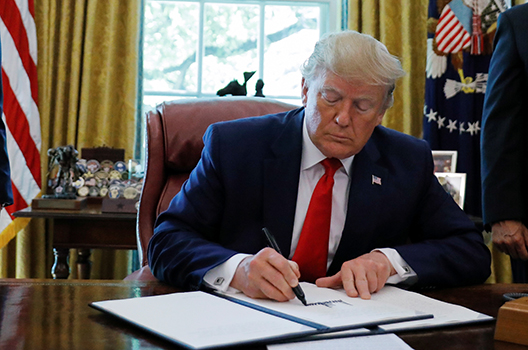 US President Donald J. Trump on June 24 signed an executive order that he said would place “hard-hitting” sanctions on Iran’s supreme leader.

“The Supreme Leader of Iran is one who ultimately is responsible for the hostile conduct of the regime. He’s respected within his country.  His office oversees the regime’s most brutal instruments, including the Islamic Revolutionary Guard Corps,” Trump said before signing the order in the White House. “These measures represent a strong and proportionate response to Iran’s increasingly provocative actions,” he added.

The executive order allows US Treasury Secretary Steven Mnuchin to impose sanctions on officials appointed by Iranian Supreme Leader Ali Khamenei and those who provide material support to his office. “These sanctions will deny Iran’s leadership access to financial resources, blocking them from using the United States financial system or accessing any assets in the United States,” the White House said.

However, most analysts are skeptical about the efficacy of such action.

“This is a lot of pomp and circumstance for no practical effect,” said Brian O’Toole, a nonresident senior fellow in the Atlantic Council’s Global Business and Economics Program and a former senior adviser to the director of Treasury’s Office of Foreign Assets Control (OFAC).

“It may serve to antagonize the supreme leader, but will accomplish not much more,” he added.

Daniel Fried, a distinguished fellow at the Atlantic Council and a former State Department coordinator for sanctions policy, said: “The impact will be mostly symbolic. Given the high level of current US sanctions, that may be a good thing.”

Borzou Daragahi, a nonresident senior fellow with the Atlantic Council’s Middle East Security Initiative, said the sanctions are “designed to garner splashy headlines and clicks, creating the sense that the White House’s Iran policy is working.”

“In reality, the Iranian entities targeted, including the office of the Supreme Leader Ali Khamenei, operate outside of the international financial networks the United States can control and monitor, and sanctions won’t bite,” he explained.

Barbara Slavin, director of the Future of Iran Initiative at the Atlantic Council, similarly noted that the sanctions “appear to be largely symbolic, but will reinforce the impression that the object of Trump’s Iran policy is not a new agreement or even new negotiations but simply to weaken Iran and, if possible, overturn its regime.”

Matthew Kroenig, deputy director for strategy at the Atlantic Council’s Scowcroft Center for Strategy and Security, however, said the sanctions marked “the next step in Trump’s ‘maximum pressure’ strategy against Iran.”

“These sanctions will further increase the pressure on Iran’s leaders in a bid to convince them to come to the table and discuss limits on their destabilizing nuclear and missile program and support for terror,” Kroenig said.

Samantha Sultoon, a visiting senior fellow with the Atlantic Council’s Global Business and  Economics Program, said: “Since the status quo is increasingly ‘maximum pressure,’ any action taken has to be presented as being significant —irrespective of the actual impact.

“This action is unlikely to truly ratchet up the supposed maximum pressure, but will certainly needle the Iranian regime,” she said.

The Trump administration’s “maximum pressure” strategy with Iran has included placing sanctions on key sectors of Iran’s economy and designating the IRGC as a foreign terrorist organization.

The sanctions come amid escalating tensions between the United States and Iran. US-Iran relations have been fraught since Trump pulled out of the nuclear deal with Iran in May 2018. More recently, US officials have blamed Iran for two separate explosions on six oil tankers around the Strait of Hormuz; Iran has denied responsibility. Besides designating the IRGC as a foreign terrorist organization, the Trump administration has attempted to drive down Iran’s oil imports by ending sanctions waivers for a handful of countries that were buying Iranian oil, while Iran announced that it will be increasing the stockpile of its enriched uranium in violation of the nuclear deal. Last week, Iran’s military shot down a US drone which it claimed was in Iranian air space—a claim US officials have denied. Trump ordered a missile strike in response to the downing of the drone, but called it off at the last minute because he did not see it as “proportionate.”

Richard L. Morningstar, founding chairman of the Atlantic Council’s Global Energy Center, said Trump was right to call off the military strike on Iran. “However, it is highly questionable whether the new sanctions announced today will have any effect on Iran’s behavior,” he said.

“After the public confusion over the canceled military strike, it’s clear that this was what the administration had on the shelf and ready to go, not necessarily what would have greatest impact,” O’Toole said of the sanctions on Khamenei.

US Treasury Secretary Steven Mnuchin, who was also present at the White House signing ceremony on June 24, said Trump had instructed him to slap sanctions on Iranian Foreign Minister Javad Zarif later this week. Mnuchin said the sanctions on the Iranians would “lock up literally billions of dollars of assets.”

While Trump intends his “maximum pressure” strategy to convince Iran to come to the negotiating table, Slavin said if Treasury did go ahead and target Zarif that “would clearly mean an end to diplomacy with Iran.”

Holly Dagres, a nonresident fellow with the Atlantic Council’s Scowcroft Center for Strategy and Security, agreed that the sanctions would deter Iran from returning to the negotiating table. “Tehran wants to see actual incentives—such as the United States returning to the nuclear agreement or removing sanctions—in order for it to negotiate with the Trump administration,” said Dagres.

She said: “Punitive measures will only make Iran push back harder against the United States: How can the Trump administration say it wants to negotiate when it intends to sanction Tehran’s leading negotiator, Foreign Minister Mohammad Javad Zarif?”

“Iran will only interpret this as the path to regime collapse, not negotiations. It will also lead to a further escalation in the region,” Dagres predicted. “The Trump administration appears not to understand the ‘art of the deal.’ It’s all stick and no carrot,” she added.

Daragahi said designating the office of Iran’s supreme leader, as well as potentially the foreign minister, “will strengthen the conviction in Tehran that the White House is aiming only to insult and humiliate the Iranian leadership, and not interested in any diplomacy.”

And Morningstar maintained that sanctions on Zarif could be “particularly problematic in that he may be one of the few Iranians with whom the administration could ultimately hold reasonable discussions.”

The White House statement maintained that Trump “has been clear that he is open to the possibility of future talks with Iran, and wants to ensure they are never allowed to gain nuclear weapons.”

O’Toole contended that the sanctions would not impede negotiations “should there ever be a true impetus for talks.”

The White House said that through the sanctions it is sending a “clear message to the Iranian regime that it must end its malign behavior.”

Treasury’s OFAC separately announced on June 24 that it had taken action against eight senior IRGC commanders.  “The United States is targeting those responsible for effectuating the Iranian regime’s destructive influence in the Middle East.  IRGC commanders are responsible for the Iranian regime’s provocative attacks orchestrated in internationally recognized waters and airspace, as well as Iran’s malign activities in Syria,” said Mnuchin.

Meanwhile, on a visit to Saudi Arabia where he is seeking to build a coalition against Iran, US Secretary of State Mike Pompeo condemned an attack by Houthi rebels on an airport in Saudi Arabia. He accused Iran of having “spent years funneling cash, weapons, and Islamic Revolutionary Guard Corps support to the Houthis.”

“With every attack conducted by an Iranian proxy, the regime tacks another day onto its forty-year track record of spreading death and chaos in the region, and beyond,” Pompeo added.

Image: US President Donald Trump signs an executive order imposing fresh sanctions in the Oval Office of the White House in Washington, US, June 24, 2019. (REUTERS/Carlos Barria)