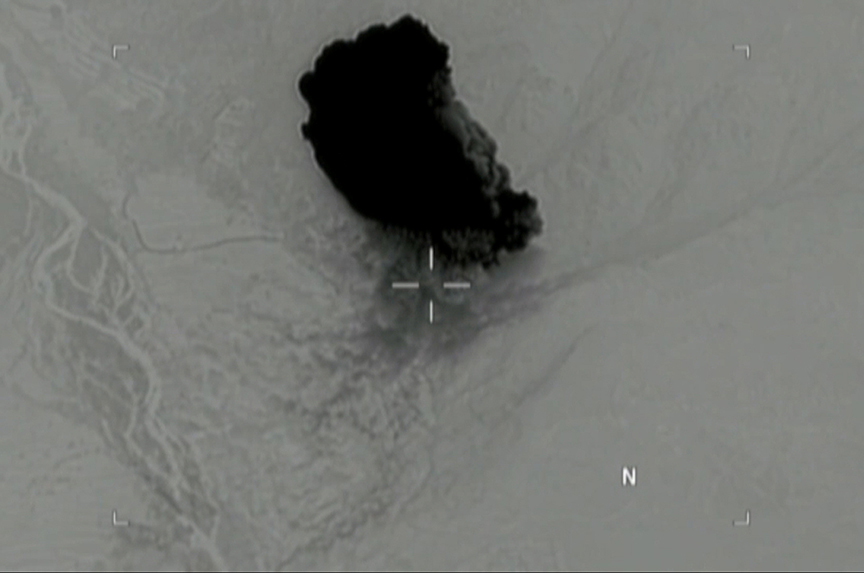 By dropping the ‘mother of all bombs’ on an Islamic State target, the United States reaffirmed its commitment to fighting terrorism, said the Atlantic Council’s James B. Cunningham

The United States sent a clear message of its commitment to fighting terrorism when it dropped the so-called mother of all bombs on an Islamic State target in Afghanistan on April 13, said James B. Cunningham, a nonresident senior fellow with the Atlantic Council’s South Asia Center.

“It really is a military instrument used to accomplish a military task,” said Cunningham, a former US ambassador to Afghanistan, adding, “there is a political element to it as well in terms of showing our commitment and determination in this particular fight.”

The US military dropped the largest non-nuclear bomb in its arsenal on an Islamic State cave and tunnel complex in Achin district in Afghanistan’s eastern Nangarhar province. The GBU-43/B Massive Ordnance Air Blast (MOAB), dubbed the “mother of all bombs,” is a 21,600-pound, GPS-guided munition. While dozens of people are believed to have been killed in the explosion, the Afghan defense ministry said civilians were not among the casualties.

US President Donald J. Trump said the mission in Afghanistan, which came days after a US missile strike in Syria in response to a chemical weapons attack, had been “very successful.”

Former Afghan President Hamid Karzai condemned the strike. “This is not the war on terror but the inhuman and most brutal misuse of our country as testing ground for new and dangerous weapons,” Karzai wrote on Twitter. “It is upon us, Afghans, to stop the USA.”

“This weapon has been tested in the past, it just hasn’t been used because it is designed for a very specific military task,” he said, noting that Gen. John Nicholson, the top US commander in Afghanistan, determined that it was appropriate to drop the bomb on an Islamic State target in what is a remote and hostile location.

The Islamic State, or Daesh, in Afghanistan is mainly comprised of Afghan and Pakistani Taliban fighters who have for one reason or the other chosen to rebrand themselves. The Islamic State is based in Nangarhar province where they have been under pressure from coalition and Afghan forces. A US Special Forces soldier was killed in the province during a counterterrorism operation on April 9.

The Islamic State is trying to establish a foothold in Afghanistan, Cunningham said, but it has been met with stiff resistance from coalition and Afghan forces, as well as the Taliban.

“I don’t think Afghanistan is a place where Daesh is going to find very fertile ground for what it is trying to do,” said the former US ambassador. “But they are, unfortunately, a determined and deadly adversary as we’ve seen in the suicide attacks and bombings that they have carried out.”

Cunningham welcomed the Trump administration’s ongoing review of the US strategy in Afghanistan. US National Security Advisor Gen. H.R. McMaster will be traveling to Afghanistan in the next few weeks as part of this review.

Part of that strategy will be taking a look at Pakistan’s support for terrorist groups that kill US troops in Afghanistan, said Cunningham.

James B. Cunningham spoke in an interview with the New Atlanticist’s Ashish Kumar Sen. Here are excerpts from the interview.

Q: Former Afghan President Hamid Karzai has criticized the US bombing in Nangarhar. What impact—political as well as military—do you expect from this strike?

Cunningham: I think it is a bit unfortunate that it has taken on such a high profile. It really is a military instrument used to accomplish a military task. There is a political element to it as well in terms of showing our commitment and determination in this particular fight.

Former President Karzai’s reaction is overblown, as many of his reactions are these days. This isn’t testing some kind of new weapon using Afghanistan as a test ground. This weapon has been tested in the past, it just hasn’t been used because it is designed for a very specific military task. It is clear that Gen. Nicholson decided that the task was at hand, which was how to strike at this Daesh complex without physically trying to enter it in that very difficult part of the country.

Q: US and Afghan forces have been involved in fighting the Islamic State in Nangarhar. What challenges have they faced in those operations?

Cunningham: I have flown over that landscape. It is extremely rugged, isolated, difficult to move around and to get to. The task for the Afghan and US forces is very difficult. Getting in and out of there, having the intelligence that you need, getting to the right place at the right time is difficult and dangerous as we saw the other day when a US serviceman was, unfortunately, killed in that fight. [US and Afghan forces] have been pursuing that [fight] now and with determination I am sure they will continue to do so and use the instruments that they can bring to bear.

Q: How entrenched is the Islamic State in Afghanistan?

Cunningham: Entrenched is probably not the right word. As I understand it, there is definitely a presence but it seems to be relatively small at this stage. They are trying to establish themselves. The Afghan and the international forces have been having an effective impact in containing them and beating them back.

I don’t think Afghanistan is a place where Daesh is going to find very fertile ground for what it is trying to do. The international forces and the Afghans will continue to squeeze them out and limit their activity. But they are, unfortunately, a determined and deadly adversary as we’ve seen in the suicide attacks and bombings that they have carried out.

Q: What is the composition of the Islamic State in Afghanistan?

Cunningham: It is a combination of foreign fighters and Taliban, probably both Afghan and Pakistani Taliban who have migrated into their arena. The composition doesn’t really matter, what matters is the violent and extreme ideology, and the brutality with which they operate. That is the more important determining factor of the threat that they pose.

Q: Does the Taliban view the Islamic State as an adversary?

Cunningham: There is probably a mixture of views. It doesn’t seem that the Taliban are very inclined toward the kind of ideology that Dash espouses. They have a certain commonality of views and tactics, but the nature of the groups is quite different. There has been a lot of conflict between the Taliban and Daesh as well.

Q: What do you make of reports that the Russians are supporting the Taliban because they fear Daesh coming across the border into Russia?

Cunningham: It is disturbing. The Russians have denied providing any support to the Taliban, but have acknowledged that there has been a conversation about confronting Daesh. It is not a good thing that the Russians are trying on their own, after all this time, to reinsert themselves into a dynamic in Afghanistan that they haven’t been involved in—that is, a political dynamic in Afghanistan that has them engaging with the Taliban in an independent way that seems to be developing in ways that we think are harmful.

Q: What should be the ingredients of a long-term US strategy for Afghanistan? Is dropping massive bombs on terrorists enough when they continue to receive support from across the border in Pakistan?

Cunningham: I am glad that there is a strategy review going on in the administration. The new national security advisor will be in Afghanistan in the next couple of weeks to update himself first hand. [US National Security Advisor] Gen. [H.R.] McMaster served in Afghanistan and was there when I was ambassador.

The strategy review is a welcome opportunity to take a look at the country and the region to re-evaluate how we can work with our international and Afghan partners and others in the region who want to work with us. It is also an opportunity to reconfirm our commitment and develop a strategy in the long term.

It has been a problem for some time that we haven’t had a clear long-term strategy for Afghanistan. We need a long-term strategy, one that provides clarity to our friends and adversaries on the nature of what we are trying to achieve there. Part of that will be taking a fresh look at the role of Pakistan and what can be done to deal with it.

Image: A still image taken from a video released by the US Department of Defense on April 14 shows the moment after a GBU-43/B Massive Ordnance Air Blast Bomb (MOAB), nicknamed the “mother of all bombs,” struck an Islamic State target in Achin district in the eastern province of Nangarhar in Afghanistan. US officials said the target was a network of tunnels and caves that was being used by Islamic State militants. (US Department of Defense/Handout via Reuters)