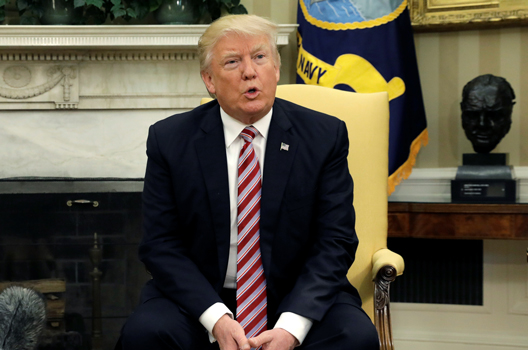 The Washington Post reported on May 15 that US President Donald J. Trump disclosed highly classified information to two Russian officials—Foreign Minister Sergei Lavrov and Ambassador to the United States, Sergey Kislyak—in their White House meeting on May 10.

“The information the president relayed had been provided by a US partner through an intelligence-sharing arrangement considered so sensitive that details have been withheld from allies and tightly restricted even within the US government,” the Post reported, citing unidentified current and former US officials.

The information pertained to details of an Islamic State terrorist threat related to the use of laptop computers on aircrafts. In March, the United States and the United Kingdom barred passengers traveling from airports in several Muslim-majority countries from bringing laptops on board as carry-on items.

Trump took to Twitter on May 16 to confirm that he shared “facts pertaining to terrorism and airline safety” with the Russian officials. He also defended his “absolute right” to share the information.

The news raises questions about what fallout Trump’s disclosure could possibly have on sensitive intelligence-sharing relationships that the United States has with its friends and allies. The New York Times reported that Israel was the source of the classified information shared by Trump.

Atlantic Council analysts shared their thoughts on Trump’s actions. Here’s what they had to say.

Frederic C. Hof, director of the Atlantic Council’s Rafik Hariri Center for the Middle East, served as special adviser for transition in Syria in US President Barack Obama’s administration in 2012.

“If the news reports are accurate, President Trump provided far more information to his Russian visitors than he should have.  Even if he did not discuss specific intelligence sources and methods, he may have placed both in dire jeopardy by sharing too much detail.

“Is this a hanging offense? Does it drive a spike into existing intelligence sharing arrangements? No on both counts, provided any errors are confronted and acknowledged—at least privately—and provided lessons learned translate into better behavior.

“Mistakes at the presidential level happen, and can have enormously negative consequences. But they are often correctable. John Kennedy learned harsh lessons from the Bay of Pigs and Berlin, and he thoughtfully applied those lessons with skill and success. If what Donald Trump did was reported accurately, denial—in the sense of having no private regret and no personal sense of having to do better in the future—would be his greatest enemy.  It would also be a potent, if unintended, national security threat to the country he leads.”

Alexander “Sandy” Vershbow, distinguished fellow at the Atlantic Council’s Brent Scowcroft Center on International Security. He was the deputy secretary general of NATO from February 2012 to October 2016.

Q: Is it unusual for a president to share such information with an adversary?

Vershbow: Intelligence sharing with an adversary like Russia is unusual, especially at the presidential level, but has sometimes been done in special circumstances, for example: when there is a shared interest in protecting citizens against a terrorist threat; or when it is necessary to persuade an adversary to take action to prevent an illicit arms sale or weapons proliferation by rogue actors within its jurisdiction.  Such exchanges are usually handled by intelligence professionals in order to ensure that any information that could compromise intelligence sources and methods has been removed.

Q: What, if any, fallout is this news likely to have on US intelligence sharing relationships with other countries?

Vershbow: The fact that sensitive intelligence provided by a US partner has been transferred to Russia without that partner’s permission, and that intelligence sources and methods may have been compromised, will make other partners very reluctant to share intelligence with the US in the future.  As a consequence, it could weaken US and allied efforts to destroy ISIS and prevent future acts of terrorism.

Q: What can the Russians do with the information they received?

Vershbow: The Russians may be able to identify the sources of the intelligence by extrapolating on the information they received, and tip off the Syrian government or other hostile parties on how to deny the US and its allies such information in the future.

Image: US President Donald Trump speaks to reporters after his meeting with Russian Foreign Minister Sergey Lavrov at the White House in Washington, US, May 10, 2017. (REUTERS/Kevin Lamarque)