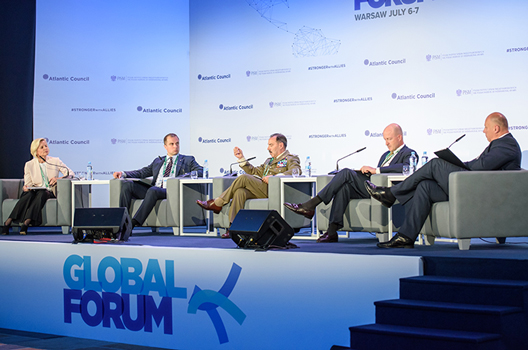 US President Donald J. Trump’s speech in Poland ahead of the G20 summit on July 7 reassured allies and emphasized the importance of the transatlantic relationship, noting that a strong Europe is beneficial for the United States and the whole of the West.

“When your nations are strong, all the free nations of Europe are stronger, and the West becomes stronger as well,” Trump said in a speech on July 6 in Warsaw. “Together, our nation and yours can bring greater peace, prosperity, and safety to all of our people.”

“We live today in an era of global volatility…[and] we appeal for transatlantic cooperation,” to deal with the myriad threats facing the international community today, Polish Minister of Foreign Affairs Witold Waszczykowski said in a keynote address at the Atlantic Council’s Global Forum in Warsaw.

Noting the significance of Trump’s trip to Poland and the gravity of his vocal support for the US-European relationship, Waszczykowski called the US president’s visit “an important step to strengthen the transatlantic link and to further our transatlantic ambitions.”

In a press conference in Warsaw on July 6, Trump offered strong words of support for transatlantic ties and US commitment to not only Poland, but all its European allies. Trump reassured US partners rattled by his skepticism of NATO unequivocally stating: “We stand firmly behind Article 5 of the NATO charter, the mutual defense commitment.”

Referring to the transatlantic community as a “community of nations” with “common values,” Trump emphasized the need for US-EU cooperation in order to meet the myriad of challenges facing the international community, particularly those posed by Russia. Trump spoke pointedly about Russia’s activities in Ukraine and Syria, as well as its energy activities in Europe.

In an era of such volatility, the transatlantic alliance provides an essential bulwark against destabilization. However, according to Stephen Hadley, founding partner at RiceHadleyGates and national security advisor to former US President George W. Bush, “one of the elements of volatility has been in some sense the US [presidential] election and a president who came to power expressing a lot of skepticism” of existing institutions, such as the European Union (EU) and NATO. Trump’s speech in Warsaw “went a long way toward reassuring” US allies.

“The message that needs to be sent is one of commitment to Europe and commitment to global leadership, and I think President Trump is getting there,” said Hadley.

Hadley spoke on one of a series of panels throughout the Global Forum focused on Trump and the United States’ role in Europe, as well as the importance of the transatlantic alliance for US and European stability and security.

“The strong words of the US president will help us all in the European Union to think about what we want to achieve,” said Rafal Trzaskowski, a Polish member of the European Parliament. “The United States of America stands side by side with the EU, with NATO, when it comes to defending our integrity, defending our values, defending our security,” he said.

With regard to security, Trzaskowski added that: “It was very important that President Trump delivered very strong words about Russia.” His condemnation of Russia’s revanchist activites were the “most pointed comments about the challenges posed by Russia he has made to date,” said Christine Wormuth, director of the Atlantic Council’s Adrienne Arsht Center for Resilience.

Trump’s comments on Russia were made ahead of his July 7 meeting with Russian President Vladimir Putin on the sidelines of the G20 in Hamburg, Germany. It was the first time the two leaders met in person.

After discussing with Putin Russian meddling in the 2016 US presidential elections, Russia’s role in Ukraine, and a cease-fire in Syria, Trump stated: “We look forward to a lot of very positive happenings for Russia and for the United States, and for everyone concerned.”

However, “what is most important of President Trump’s speech is the follow-up,” said Trzaskowski. “That matters going into the G20 talks because of our approaches…related to energy security, related to trade, related to commerce,” each of which are issues are at the core of a strong transatlantic alliance, said Paula Dobriansky, senior fellow at The Future of Diplomacy Project at Harvard University’s Belfer Center for Science and International Affairs.

To address the issue of “completing Europe,” the presidents of Croatia and Poland in 2016 launched the Three Seas Initiative, a project designed to connect the Baltic, Adriatic, and Black Seas, uniting the twelve countries in the region between them through telecommunications, energy, and transportation infrastructure. The Three Seas Summit, held in Warsaw alongside the Global Forum, was attended by the heads of state of each of the Three Seas countries—Austria, Bulgaria, Croatia, the Czech Republic, Estonia, Hungary, Latvia, Lithuania, Poland, Romania, Slovakia, and Slovenia—and Trump.

According to retired Gen. James L. Jones, national security advisor to former US President Barack Obama and founder and president of Jones Group International, “the vision for the Three Seas Initiative has at its core not only energy security, but economic security…not just for Central Europe, but for all of Europe.”

Trump threw his weight behind the Three Seas Initiative in his speech, saying: “America will be your strongest ally and steadfast partner in this truly historic initiative.” Noting that Poland received the first shipment of US liquefied natural gas (LNG) exports earlier this year, Trump said “we stand ready, willing, and able to help with your energy needs and other needs as they come along.”

“I want to be an optimist about this,” said Jones, noting that the integration of economies proposed by the Three Seas Initiative is in the best interests of all nations involved, including the United States. Though Trump’s campaign chorus of “America First,” rattled allies and attracted criticism, Jones said, “the political tone of America is not as inclusive as it should be, but deep down inside everybody knows that if this is a retreat into isolationism, that is a very bad thing for the United States in this globalized world.”

With his words in Warsaw, Trump achieved “a clear indication of the importance of a project such as energy security” that builds upon an infrastructure in Europe itself, focused on transatlantic connections in commerce and markets, said Dobriansky.

US support for the Three Seas Initiative and a European integration bodes well for the future of the transatlantic alliance, the panelists agreed. “When the United States is serious about something, we put money on it and we put our people on it,” said Lt. Gen. Ben Hodges, commanding general of US Army forces in Europe. “Our economic prosperity is tied to Europe,” he added.

(from left) Atlantic Council Executive Vice President Damon Wilson moderated a discussion with Lt. Gen. Ben Hodges, commanding general of the US Army in Europe, and Nikola Dimitrov, minister of foreign affairs of the Republic of Macedonia, at the Atlantic Council’s Global Forum in Warsaw, Poland.

Hodges emphasized the importance of US-European relations, saying, “Europe matters to the United States because of the economic relationship…but also, all of our most reliable allies and partners for any coalition come from Europe.”

According to Hodges, “there’s a strength that comes from…unity and relationships,” and the strength of the relations between the United States and its allies in Europe, reinforced by Trump’s vocal commitment, “are something that the president of the Russian Federation absolutely did not anticipate.”