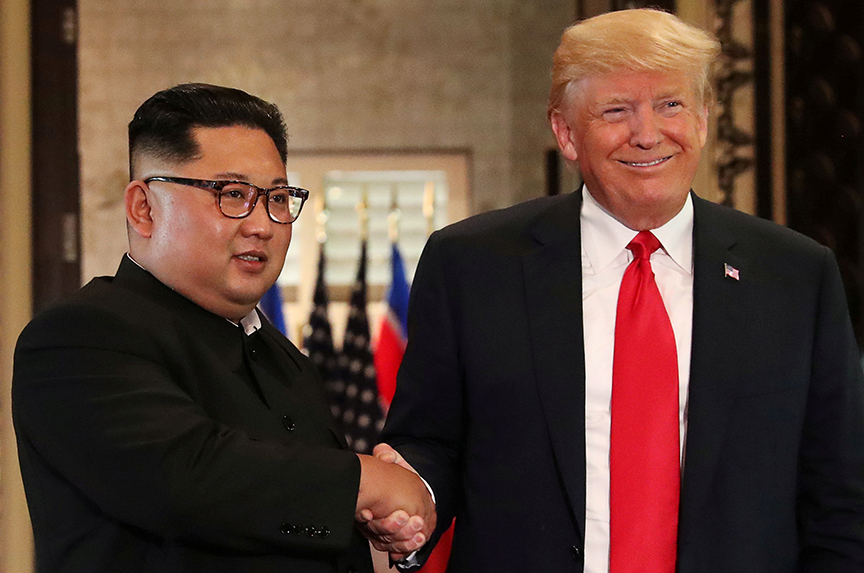 US President Donald J. Trump will meet Kim Jong-un for a second time in late February to push the North Korean leader to take steps toward denuclearization, the White House said on January 18. It did not announce a location. The two leaders last met in Singapore on June 12, 2018. That was the first meeting between a leader of North Korea and a sitting US president.

“There has been no progress on denuclearization since the Kim-Trump summit in Singapore last June, and the vague joint statement following the summit made it harder for our diplomats to press for real deliverables,” said Todd Rosenblum, a nonresident senior fellow at the Atlantic Council’s Scowcroft Center for Strategy and Security.

“Normally, dialogue between national leaders occurs when there is something to codify and after significant preparation. Another summit that is as light and salutatory to the chairman as last year’s will signal to China, Japan, North Korea, and South Korea that the American president is indifferent to anything more than imagery,” said Rosenblum.

“This will set back further efforts to achieve core US interests of there being no nuclear weapons or long-range missiles on the Peninsula, as well as an enduring peace between the South and North,” he added.

Jamie Metzl, a nonresident senior fellow at the Scowcroft Center said: “Donald Trump is so desperate to change the narrative of his collapsing presidency that there is a significant danger he will make additional concessions to North Korea for no benefit to the United States.”

“With Trump using a second summit with Kim primarily as a means of influencing domestic politics and Trump’s own legal troubles in the United States, many Americans will rightly fear that Trump will be advocating his own narrow personal interest rather than the strategic national interest of the United States in the summit with North Korea’s leader,” Metzl contended.

On the other hand, Barry Pavel, senior vice president, Arnold Kanter chair, and director of the Scowcroft Center, said a second Trump-Kim summit “could be crucial for determining whether North Korea will remain a nuclear weapons state with dozens of weapons for the long-term, or whether its trajectory will begin to be altered by some type of agreement.”

“The opportunity remains, although the chances for an agreement are low due to months of stalemate,” he said.

Robert A. Manning, a senior fellow at the Scowcroft Center, said another meeting between Trump and Kim “offers an opportunity to break the diplomatic stalemate and total lack of progress on denuclearization since the first summit last June.”

“In the interim, Pyongyang has continued to build its nuclear and missile capabilities, US leverage has eroded, with reduced enforcement of UN sanctions along the North Korea-China border, burgeoning North Korean ties to China, Russia, and South Korea,” he added.

While Trump has sought to downplay the threat posed by North Korea, his own administration’s Missile Defense Review released on January 17 described North Korea’s missile and nuclear program as an “extraordinary threat” to the United States.

“While a possible new avenue to peace now exists with North Korea, it continues to pose an extraordinary threat and the United States must remain vigilant,” the report said.

“In the past, North Korea frequently issued explicit nuclear missile threats against the United States and allies, all the while working aggressively to field the capability to strike the US homeland with nuclear-armed ballistic missiles. Over the past decade, it has invested considerable resources in its nuclear and ballistic missile programs, and undertaken extensive nuclear and missile testing in order to realize the capability to threaten the US homeland with missile attack. As a result, North Korea has neared the time when it could credibly do so,” it added.

So, now that a second summit has been confirmed, what next?

“Trump needs to reach new accords on specific steps, milestones or benchmarks along the way to dismantle the North’s nuclear weapons program, also to reach agreement—and build in flexibility —on what US tradeoffs will be, and it must be linked to an ongoing negotiating process under [US Secretary of State Mike] Pompeo’s purview to implement broad commitments with reciprocal steps by each side, and synchronized with North-South efforts at reconciliation and a peace treaty,” said Manning.

Matthew Kroenig, deputy director for strategy at the Scowcroft Center, said: “The first summit resulted in hopeful aspirations. Not without value but also not enough. The success of the second summit will be gauged according to whether it can produce a concrete roadmap for denuclearization.”

Following his meeting with Kim in Singapore last year, Trump declared “everybody can now feel much safer… There is no longer a Nuclear Threat from North Korea.”

On September 19, 2018, in a meeting with South Korean President Moon Jae-in, Kim agreed to dismantle missile facilities in the presence of international inspectors and take steps toward denuclearization—provided the United States takes “corresponding measures.”

At a joint news conference, Kim said he and Moon had “made a firm commitment to exert active efforts to make the Korean Peninsula free of nuclear weapons and nuclear threat and turn it into a land of peace.”

Pompeo said then that the Trump administration is ready to “engage immediately in negotiations to transform US-DPRK relations.” North Korea is formally known as the Democratic People’s Republic of Korea.

The secretary said the goal of this engagement would be to complete North Korea’s denuclearization by January 2021, a date set by Kim.

Image: US President Donald J. Trump and North Korea’s leader Kim Jong-un shook hands after signing documents during a summit at the Capella Hotel on the resort island of Sentosa, Singapore, on June 12, 2018. (Reuters/Jonathan Ernst/File Photo)