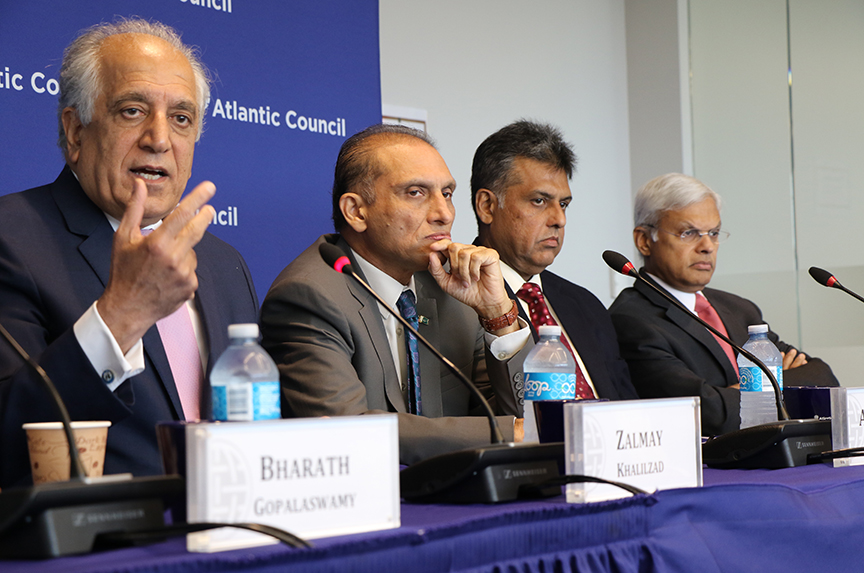 US President Donald J. Trump’s America First approach will have to take a back seat when it comes to Afghanistan.

As the Trump administration wrestles with a decision on whether to send several thousand additional US troops to Afghanistan in an effort to end a fifteen-year-old war and make peace with the Taliban, there is a firm belief in policy circles that there is a critical need for the United States to deepen its engagement in that country.

Yet, with Trump there is a “real possibility that the United States, if it is not successful within some acceptable period of time, could choose to reduce its commitment to Afghanistan and ultimately withdraw,” said Ashley Tellis, Tata chair for strategic affairs at the Carnegie Endowment for International Peace. “If that outcome occurs the door will be open to internecine regional competition in Afghanistan, which will only make circumstances in Afghanistan worse,” he added.

Therefore, Pakistan, where an assortment of terrorist groups, including the Taliban, find sanctuary, will, for the sake of its own self-interests, have to “redouble its efforts” to compel the Taliban to negotiate a peaceful settlement to the conflict in Afghanistan, said Tellis.

Pakistan’s Ambassador to the United States, Aizaz Ahmad Chaudhry, however, contended that his country’s ability to promote reconciliation in Afghanistan has been “eroded.”

The Trump administration is currently reviewing US policy toward Afghanistan. Senior US officials, including a number from within the military, have reportedly recommended deploying 3,000 to 5,000 additional US troops to Afghanistan to quickly bring an end to the conflict. This recommendation is in line with that made by Gen. John W. Nicholson, the top US commander in Afghanistan, in testimony to Congress in February.

“The United States of America still continues to be the most influential outside power balancer in various regions in the world, and notwithstanding the propensity of the present administration to try and withdraw from that global role, I think the United States should very seriously introspect,” said Tewari. “There is a lot of blood and treasure which they have invested in Afghanistan over the last sixteen years.”

“Lessons from history, if not learned, unfortunately can prove very costly,” Tewari added.

The need for an effective US strategy to end the fighting was driven home on May 31 with a massive truck bombing outside the German Embassy in Afghanistan’s capital, Kabul, that killed at least 150 people and wounded more than 300. The attack was the deadliest since a US-led coalition toppled the Taliban government in Afghanistan in 2001 for harboring al Qaeda leaders.

No group has taken responsibility for the Kabul bombing; the Taliban has denied any role. The Afghan government blamed the Haqqani Network, a Pakistan-based terrorist organization that has close ties to the Taliban. [Haqqani Network leader Sirajuddin Haqqani was appointed deputy leader of the Taliban in the summer of 2015.]

Chaudhry condemned Afghan officials for “blaming anything and everything” on Pakistan. “To say that Pakistan is responsible for everything is over-simplistic, and if you keep doing that I think you are barking [up] the wrong tree and will not be able to get to a solution,” he said.

Pakistan has for years provided safe havens to an assortment of terrorist groups, including the Taliban. The Pakistani army and intelligence service, and the Inter-Services Intelligence (ISI) agency in particular, view terrorist groups such as the Taliban as proxies that provide Pakistan strategic depth. The Taliban leadership, based in the Pakistani city of Quetta, is known as the Quetta Shura. Another Taliban group, the Peshawar Shura, gets its name from the northwestern Pakistani city where it is based.

Khalilzad noted that the terrorist safe havens have long been obstacles to peace in Afghanistan. The fact that these sanctuaries exist cannot be disputed, he said. The question in his mind is how deep into Pakistan do the logistic lines in support of these terrorists actually extend? Elements of the Pakistani army and the ISI are believed to aid these groups.

Khalilzad said Pakistan should use its influence over the Taliban to join a serious peace process in Afghanistan. “It has to tell the Taliban that if they don’t enter a peace process they will not be allowed to operate from Pakistan,” he said.

Chaudhry took exception to Khalilzad’s assertion about terrorist safe havens, one that is backed up by US and other Western intelligence agencies. Pakistan, he said, has paid a high price in blood and treasure fighting terrorists on its soil.

Early in his presidency, Afghan President Ashraf Ghani expended significant political capital by reaching out to Pakistan in an effort make peace in his country. That outreach has proven fruitless.

Chaudhry insisted that it is in Pakistan’s best interest to see a peaceful and stable Afghanistan. Instability in Afghanistan risks undermining the economic and security gains that have been made in Pakistan, he said.

Tellis said the Taliban “may have a sanctuary in Pakistan, but that sanctuary is guaranteed by the US willingness, or reticence, not to target it.”

“If the US is willing to target the Taliban shura, especially those shura leaders that are recalcitrant with respect to the question of negotiation, in my view it only increases the possibility that we will be able to have a sustained conversation,” he added.

Former US President Barack Obama angered the Pakistani government with military operations that led to the deaths of al Qaeda leader Osama bin Laden and Taliban leader Mullah Akhtar Mohammad Mansour in Pakistan in 2011 and 2016, respectively.

On the prospects for reconciliation in Afghanistan—a process that has accomplished more in failure than in success, Tellis said problems in achieving peace will persist as long as every entity involved “reaches for what it believes to be the maximalist version of its own self-interest.”

“It is time for all the players involved in Afghanistan to think of the second-best,” he added.

What needs to be done?

Given the prospects of a US troop surge in Afghanistan, an approach that has been attempted with varying degrees of success in the past, Khalilzad said US policy needs to focus on shoring up the progress made in Afghanistan, facilitating a peace process with the Taliban, and repairing relations between Pakistan and Afghanistan.

Tellis said the Trump administration’s policy review must clarify what it is that the United States hopes to achieve in Afghanistan: to prevent Afghanistan from becoming a safe haven for terrorists.

Part of the strategy to accomplish that goal should include an effort to explore a peaceful settlement with the Taliban, he said, adding that he worried that the stress of an open-ended war risks undermining the gains of the past sixteen years.

Tellis recommended that the Trump administration commit itself to providing economic assistance and military training to the Afghan government; develop a unified civil-military strategy to be executed in Kabul, not in Washington; be prepared to engage in direct negotiations with the Taliban while continuing to target the group’s leadership; encourage the Afghan government to begin a process of internal reconciliation, which would allow the state to create a unified negotiating position and Afghan provincial leaders to reach out to local Taliban commanders; have an honest conversation with Pakistan about its legitimate needs; and make a considered effort to rebuild a regional consensus about Afghanistan.

Rivalries between Pakistan and India, which have fought four wars since independence in 1947, have added to the complexity of the situation in Afghanistan. This fact was underscored on June 6 when the Taliban fired a rocket that hit the Indian ambassador’s house in Kabul.

“Unfortunately, the India-Pakistan paradigm holds the destiny of two billion people in South Asia to ransom,” said Tewari, a former minister of information and broadcasting in India.

“It is in our interests to try and ensure that whether it is in Afghanistan or whether it is our bilateral relationship we find a modus vivendi that does not impede the progress of almost a quarter of humanity which resides in that region called South Asia,” he added.