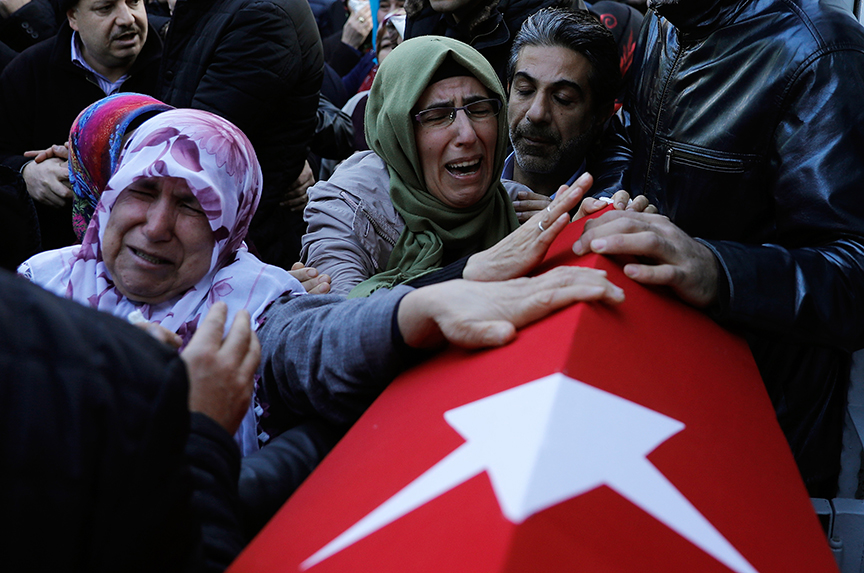 Relatives of Fatih Cakmak, a security guard and a victim of an attack at Reina nightclub, broke down during his funeral in Istanbul, Turkey, on January 2. The Islamic State of Iraq and al-Sham (ISIS) has claimed responsibility for the attack in which a lone gunman killed thirty-nine people on New Year’s Day. (Reuters/Umit Bektas)

Though Turkey’s engagement in the war in Syria has resulted in a series of attacks by the Islamic State of Iraq and al-Sham (ISIS) over the course of the past year, the most recent attack on a nightclub in Istanbul on New Year’s Day will only harden the Turkish government’s resolve to defeat the Islamist group, according to an Atlantic Council analyst.

“I think these attacks have pushed the Turks to conclude that this [war against ISIS] is something we have to finish,” said Faysal Itani, a senior fellow at the Atlantic Council’s Rafik Hariri Center for the Middle East. “In that sense, it’s focusing anti-ISIS efforts, not disrupting them,” he added.

On January 1, a gunman opened fire in a nightclub in Istanbul, killing thirty-nine people. The Turkish government has said it has identified the lone assailant, yet his identity has not been made public. ISIS has claimed responsibility for the attack.

According to Itani, the attack on the nightclub was not an instance of a lone-wolf actor inspired by ISIS’ tactics and message, but rather indicative of the terrorist group’s operational capacity in Turkey.

“In Turkey’s case, unlike more remote countries like the United States, [ISIS does] have an operational presence and an operational capacity that extends into Syria,” he said.

Turkey’s more prominent role in Syria is “at the heart” of this and other terrorist attacks throughout Turkey over 2016, according to Itani. He said that “Turkey and ISIS had pretty much left one another alone until Turkey decided to enter really in a significant way the anti-ISIS military effort led by the United States.”

Further, Itani said, “Turkey is doing its own thing, but still directed against ISIS in northern Syria, and this is the direct cause and trigger for this sort of ISIS violence against Turkish soft targets or government targets in Turkey itself.”

Codenamed Operation Euphrates Shield, Turkey’s military intervention in northern Syria aligns Turkish forces with Syrian rebel groups. The offensive is currently focused on the fight to reclaim the ISIS-held city of al-Bab near the border with Turkey. Turkish President Recep Tayyip Erdoğan has recently claimed that the capture of al-Bab is imminent. However, Turkey has called for greater assistance from the United States for this offensive.

Faysal Itani spoke in an interview with the New Atlanticist’s Rachel Ansley. Here are excerpts from our interview.

Q: What does the attack on the nightclub in Istanbul say about ISIS’ presence in Turkey? Does ISIS have operatives in the country or was this attack an instance of an individual inspired by the group’s tactics and message?

Itani: In Turkey’s case, unlike more remote countries like the United States, [ISIS does] have an operational presence and an operational capacity that extends into Syria. Actually, it is through Turkey that ISIS was able to establish a significant presence in northern Syria. The cells in Turkey itself are still active, actually, and well documented. This kind of attack, I think, is something planned by ISIS as such, and carried out in Turkey, rather than a sort of random lone-wolf, ISIS-inspired attack. [ISIS does] have the presence and the intention and the intelligence in Turkey itself to do something like that.

Q: To what extent are Turkey’s actions in Syria creating a backlash?

Itani: This is actually at the heart of it. Turkey and ISIS had pretty much left one another alone until Turkey decided to enter really in a significant way the anti-ISIS military effort led by the United States. Now Turkey is doing its own thing, but still directed against ISIS in northern Syria, and this is the direct cause and trigger for this sort of ISIS violence against Turkish soft targets or government targets in Turkey itself.

Q: What is Turkey’s independent initiative in Syria which has contributed to the backlash?

Itani: They have an operation in northern Syria called Operation Euphrates Shield, and the dual purpose of this operation is to clear the border area in northern Syria of Kurdish militants and ISIS. Right now, Turkey is trying to capture, with the help of some local ground forces, the city of al-Bab, which is an ISIS stronghold in Aleppo province. It’s been a hard fight, a tough fight, but it’s important to both parties, and as pressure builds on that, you’re going to see this sort of backlash in Turkey itself.

Q: Will Turkey become a bigger target as it takes on a more visible role in Syria?

Itani: At the moment, ISIS is going to do all it can to hit Turkey as hard as it can. I think we’re at  the top of the escalatory ladder; right now, it’s a question of what ISIS can and can’t pull off. It’s the limits of their capacity as well as the capabilities of the security and intelligence forces that determine how much damage they can do, but if they can do more damage than they have done, at the nightclub, for example, then they would definitely do it.

Q: Could the nature of Turkey’s involvement in Syria change as a result of the series of terrorist attacks over the past year?

Itani: If there was ever any ambiguity or ambivalence on the Turkish side about how much to commit to the anti-ISIS war in Syria—and there was, for several months—I think these attacks have pushed the Turks to conclude that this [the war against ISIS] is “something we have to finish, we have to do it.” It’s created a sort of consensus within Turkish circles to go after the problem and go after it hard. In that sense, it’s focusing anti-ISIS efforts, not disrupting them.

Q: Erdoğan has issued a statement that the Turkish-backed offensive by Syrian rebels to retake the Syrian town of al-Bab, currently held by ISIS, should soon be complete. What are the prospects for the fall of al-Bab, and, what is the significance if ISIS is driven from the city?

Itani: It’s proven a bit more difficult than they expected, but with US help, potential Russian help—don’t rule that out—and Turkish commitment on the ground as well as local rebel forces fighting, they’ll take it. What happens to ISIS the day after? I imagine that they go east back toward Raqqa, which is their so-called capital, and they reinforce there. They have nowhere else to go, no other direction to move in from al-Bab than that, and that’s why they’re taking such a strong stance because there’s nowhere to retreat to.

For Turkey, it’s very significant [if ISIS retreats] because it means that Turkey has decisively cut off the two chunks of Kurdish territory in Syria from one another. The main impetus for Turkish intervention is to stop this connection of Kurdish territory in Syria. Taking al-Bab means it’s stopped. That’s also hugely significant, and it allows Turkey to start looking at other areas held by the Kurdish militias in Syria itself and then pushing against them properly.

Q: Does the alignment between Turkey and Russia complicate the US fight against ISIS?

Itani: Yes, the main complicating factor has been for a while that the United States has allied with the Kurdish YPG [People’s Protection Units], Turkey’s enemy, and Turkey views them as a larger problem than ISIS. That drove a wedge between Turkey and the United States, but the Turks had to manage this wedge carefully because at the end of the day, they did need the United States, on some level, and they had to respect the partnership at the military level. Russia coming in and saying, “OK, we will be your great-power ally in this, including against the Kurds,” and there are signs that that is what’s happening, it lessens the Turkish incentive to cooperate with the United States. Having said that, we are going through a leadership transition in America. We don’t know what Donald Trump’s position on any of this is going to be. We know that he’s prone to being pro-Russia; what that actually materializes into is anyone’s guess, but if he finds himself moving closer to the Russian position, he may find himself moving closer to the Turkish position, too. The Kurds in Syria might be the big losers.

Q: Between Trump moving toward the Turks and the Russians and the Turkish government’s renewed focus on the fight against ISIS, will that create more of an opportunity for cooperation between Turkey and the United States?

Itani: Yes, there’s no doubt about that. The grounds for cooperation were upset by America’s refusal to intervene against Bashar al-Assad, but even more so by their stance on the Kurdish issue in Syria. The Assad thing has been thrown to the sidelines after the fall of Aleppo. Turkey no longer expects that Assad can or will be overthrown. Now, the only question on the table is the Kurdish question, and if that’s resolved largely in Turkey’s favor, or at least more balance is brought to the US relationship with the Kurds, then everybody will find it easier to get along for sure.