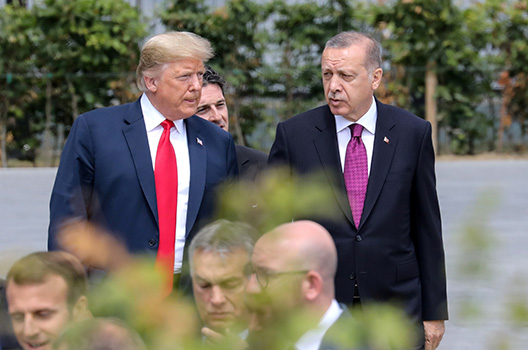 After a bizarre morning during which many of the prosecution’s secret witnesses recanted statements made in support of the idea that Pastor Andrew Brunson, an American, supported terrorists, a Turkish court on October 12 sentenced Brunson to time served and lifted travel restrictions. In short: Brunson is free to leave Turkey and is on his way back to the United States. The US government has, over the past year, been in talks with its Turkish counterparts about the terms of Brunson’s release. His release will close a strange chapter in US-Turkish diplomatic history. It will not, however, resolve tensions.

The United States was confident in July that it had reached an agreement with Turkey to secure Brunson’s release. The diplomatic talks were complicated and largely centered in the State Department, with cooperation from the Treasury Department.

In a swap arrangement said to have been agreed to over the summer, Brunson’s release was supposed to trigger the return a Turkish national, Mehmet Hakan Atilla, a Halkbank executive currently serving out the rest of a thirty-two-month sentence after being convicted of violating US sanctions on Iran. Atila’s return would comply with the US-Turkey Prisoner Transfer Treaty, and, therefore, be legally justifiable. After Atilla’s return to Turkey, where he would serve out his sentence, Ankara was expected to stagger the release of a classified number of US citizens currently held in Turkish prisons. Finally, under the terms of the original agreement with Turkey, Treasury would be forthright and open with Turkey about the looming fine for Halkbank, the Turkish state-run bank.

The White House, meanwhile, engaged in a second track with the Turkish presidency. In a pull-aside meeting at the NATO summit in Brussels in July, US President Donald J. Trump and Turkish President Recep Tayyip Erdoğan reached a side agreement where Trump would use his influence with Israeli Prime Minister Benjamin Netanyahu to secure the release of a Turkish woman in Israel. Trump, shortly thereafter, held up his end of the deal, only to see Brunson not released in July.

Turkey’s failure to release Brunson upended the twin-track US diplomatic efforts and set in motion the White House’s determination to follow through on threats made to Turkey during the negotiations over Brunson. It also ended any talk of a prisoner swap deal. In August, the Treasury Department used the Global Magnitsky Act to impose sanctions on Turkish Justice Minister Abdulhamit Gul and Interior Minister Suleyman Soylu. Shortly thereafter, the White House doubled the rate of steel and aluminum tariffs on Turkey, and signaled that more punitive action would follow if the Brunson issue was not resolved.

Looking forward, Brunson’s release should freeze future US financial measures levied against Turkey. However, Turkey is certain to still face import duties on steel and aluminum, given that Ankara was included in the initial tariffs imposed in May. Trump could simply order the removal of the Global Magnitsky sanctions.

At this time, it is unclear if or how the original terms of the deal may have changed. Although, early indications are that the United States ended these discussions in July and simply made clear that Brunson’s release was a red line. The Turkish government was reportedly unhappy about a possible Halkbank fine—and it will be interesting to see if there are any changes to the terms outlined above. Certainly, more discussions will have to take place in the near future.

Looking beyond the narrow terms of the Brunson deal, the United States and Turkey remain at odds over divergent approaches to Iran, the Syrian civil war, and Turkey’s purchase of the Russian-made S-400 anti-aircraft missile system.

The Trump administration would like to peel Turkey away from Russia in Syria, and wants to enlist Ankara in its broader effort to pressure Iran in the Middle East. Ankara, however, has ample reasons to maintain cordial ties with the Islamic Republic, given its dependence on Iranian natural gas, and oil, and interest in maintaining robust cross-border trade. Thus, as the United States pushes ahead with its effort to use secondary sanctions to drive down the import of Iranian energy this November, tensions with Turkey over Iranian energy could become more acute. Indeed, if one thinks about it, the roots of the crisis over Atilla and then Halkbank link back to the imposition of sanctions against Iran in 2012, and Ankara’s efforts to sidestep them.

On Syria, the two sides remain mired in discussions about the future of Manbij. The United States worked with the Kurdish-led Syrian Democratic Forces (SDF) to liberate the city. The SDF took control of the city in June 2016 and empowered a local council, dubbed the Manbij Military Council (MMC), to govern. The fall of Manbij prompted a Turkish military response—Operation Euphrates Shield. Turkish troops entered Syria on August 24, 2016, and eventually succeeded in taking control of the then Islamic State-held Al Bab and its surrounding rural areas. The two, independent, operations resulted in a jagged forward line of troops dividing Turkish and Turkish allied forces from US- and Kurdish-led forces. Ankara then began to threaten Manbij and demanded that the United States oust the MMC and replace it with Turkish-preferred rulers.

In June, the two sides reached agreement on a conditions-based document, the Manbij roadmap, to coordinate joint patrols around the forward line of troops (FLOT). To date, the two sides are conducting “coordinated independent patrols” on each side of the FLOT. The intent is to eventually do coordinated patrols around certain position of the FLOT. However, delineating where the patrols will go, who will be in charge, and the rules of engagement for each military has proved difficult. Looking beyond these joint patrols, the challenge will then turn to the issue of governance, and how to assuage Turkey about the long-term governing arrangements in the city.

Finally, the United States and Turkey remain at odds over Ankara’s purchase of the Russian-made S-400 surface-to-air missile system. The system’s powerful radar is capable of collecting information, and the concern in the United States is that the Russians will gain access to radar return data from Turkish-operated F-35 aircraft. In response, the US Congress froze the transfer of F-35 jets to Turkey in the most recent National Defense Authorization Act until a report is drafted about how to replace Turkish-manufactured components in the F-35 supply chain. The language was designed to signal to Turkey that the transfer of Turkish F-35s (now based at Luke Air Force Base in Arizona, where Turkish pilots have recently started training) could be in jeopardy. Turkish aerospace firms could also be penalized under the Countering America’s Adversaries Through Sanctions Act (CAATSA), which includes language to impose penalties on companies that do business with Russian government-owned firms. To date, Turkey has indicated that it will follow through with the agreement, and the first delivery of S-400 will take place in July 2019. This will set up a showdown on two separate issues, which could threaten the transfer of F-35s to Turkey and, independently, result in sanctions against Turkish firms.

As the Brunson saga comes to an end, the United States and Turkey will continue to be at odds over a variety of issues. In fact, the release of Brunson may only serve to magnify the very serious—and more tangible—disagreements over a variety of foreign policy issues. In the end, Turkey had ample reason to release Brunson. With an economy in crisis, the prospect of more US pressure could make solving the economic malaise more difficult. Moreover, with discussions ongoing about Syria and a looming showdown over the S-400, taking the Brunson issue off the table could help Turkey win some much-needed goodwill from the executive and legislative branches. Finally, Turkey could simply return to elements of the proposed deal, armed with some goodwill earned from Brunson’s release, and still try and wrangle US concessions about Halkbank and Atilla. Only time will tell.

The pastor’s fate was tragicomic, in that the conduct of the trial in Turkey, and the terms of his release, were a mockery of justice. However, it is tragic that a man had to spend two years in confinement for no reason at all. Moving forward, the actual issues dividing the United States and Turkey will still need to be resolved.

Aaron Stein is a resident senior fellow in the Atlantic Council’s Rafik Hariri Center for the Middle East. Follow him on Twitter @aaronstein1.