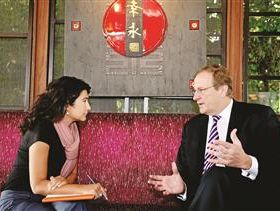 If Turkey converges with Europe and the United States, rather than diverging, then the world looks totally different, according to the head of a US-based think tank. Turkey plays a stabilizing factor in a very unstable part of the world, Frederick Kempe, the president of the Atlantic Council, told the Hürriyet Daily News. “Turkey has become a pivotal state for almost everything we care about in the Atlantic Council,” he said, explaining why the think tank chose to open its first oversees office in Turkey.

Why has the Atlantic Council chosen to open its first overseas office in Turkey?

Turkey has become a pivotal state for almost everything we care about in the Atlantic Council. If Turkey converges with Europeand the United States rather than diverging then the world looks totally different. Turkey plays a stabilizing factor in a very unstable part of the world. If it remains a stable factor that can engage successfully both with the West and with the region then we think the world is likely to have a better outcome than if Turkey does not play that role.

Do you think Turkey and the US are converging? The recent decision to purchase anti-missile systems from China raised eyebrows.

Let’s see how that plays out. I think there are still a lot of open questions. In our complicated world you sometimes compete or cooperate with countries and you are sometimes in coalition with countries. I think we are much more likely to have a cooperative relationship with Turkey than a competitive relationship. But in certain cases we will compete as well. So that does not concern me that much. How Turkey will develop as a democracy is a very interesting point for the world. If Turkey had a stronger opposition party I think the country would probably benefit from that.

Some would argue that Turkish democratic credentials were tarnished by the recent Gezi events.

In the large sweep of history look at the way Turkey has grown. Look at the multiple economic growths in the last decade, the growth of exports, the widespread education. If you actually look at how Turkey has developed; it is overall a very positive story. Don’t forget it was not long ago Turkey was not democratic at all. The idea that it will go through some bumps in the road in terms of developing its democracy is absolutely normal. The question is how it handles these problems. There have been some reputational issues in the last weeks.

But I think by and large Turkey still has high respect from investors around the world for how it managed its growth in a very difficult time. The fact that Turkey came through this as healthy as it did is a real credit to the strength of the financial system and to the resilience of the economy.

But critics would say that additional measures have not been taken to make this economic success sustainable.

There are two issues that Turkey is going to have to deal with in the next decade. One of them is the current account deficit, the other one is the debt situation. But it strikes me that both of those are easy to deal with if you look to developments in terms of energy, developments of Turkey as an energy hub. We believe at the Atlantic Council that the creation of Turkey and Istanbul as an energy hub will be followed by Turkey becoming a financial hub. When you see all these positive developments then the long term picture for the Turkish economy is a good one.

So you are confident that Turkey will become an energy and financial hub?

Yes; if you see the developments over the last decade and then you extrapolate from those and look to the next decade; I think it is inevitable. Energy hub, it is already becoming, that’s clear. The relationship with the Kurdish Regional Government (KRG) in Iraq is very interesting. The financial hub will just follow that; partly because it set itself up with a very healthy financial system.

To be a pivotal state and a hub you need to project stability. While in New York, President Abdullah Gül was asked whether Turkey is supporting radical elements in Syria. Are there question marks as to the role Turkey played in the Syrian ordeal?

If the West and its friends had intervened early on to help the Syrian opposition, then you would have had much more moderate opposition and you would have had a much better possibility of a succession to [Bashar al-]Assad as being a reasonable one and not an extremist one. The longer we allowed this battle to go on the more the extreme elements have grown. The issue here is how do we actually work together as an international community to not just stand by when you have more than 100,000 people dead.

Is the era of US military action over?

I don’t think American people have any stomach for further military intervention in the region.
Critics say Turkey has not played its hand well in Syria.

I think Turkey is on a path where it is going to become an ever more influential player in the region but one has to come to terms with what it means; influence for what purpose and how do you exercise that influence. I think this country is in some way growing into its role.

With the new energy equation are we to expect the US to withdraw from the Middle East?

We are seeing a geopolitical shift in the energy world. The US will be this year the world’s biggest producer of oil and gas. It is dramatic and it is going to have consequences. One of the consequences is that you start looking to the geopolitics in a different way. If you are getting ever fewer energy resources from the region, you certainly look at the region in a different manner. We have too many security interests, too many allies; our relationship with Israel; withdrawal is not on the cards. But there will be a different form of engagement with different stakes.

In this respect how do you see the Turkish-US relationship shaping up in the near future?

The US-Turkish relationship is going to become inevitably closer. We have a common interest in democratic change in the Middle East. What we have to do is to get more effective when we are working together. We put the first overseas office in Turkey because we see this bilateral relationship as one of the most important bilateral relationships in the world.

Yet we have seen different patterns in Egypt, or Syria for instance. Don’t you think it will be a difficult relationship?

I don’t think it is going to be an easy relationship but it is an inevitable relationship; as the US looks around the region for stable democratic actors, how many are there, particularly with Turkey’s weight?

To what degree are ideologies overlapping; especially when Turkey is criticized of favoring a Muslim Sunni ideology rather than a secular one?