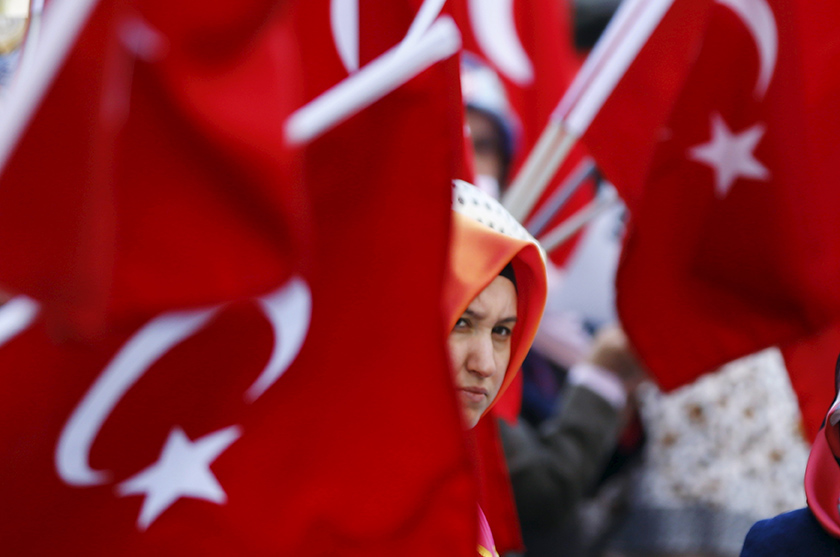 A supporter of the Gülen movement attends a protest outside the Kanalturk and Bugun TV building in Istanbul on Oct. 28 after Turkish police stormed the offices of an opposition media company, days before the Nov. 1 election, in a crackdown on companies linked to a US-based cleric and foe of President Recep Tayyip Erdoğan. The media groups are owned by Koza Ipek Holding, which has links to Islamic preacher Fethullah Gülen. (Reuters/Osman Orsal)

Turkish President Recep Tayyip Erdoğan will not be on the ballot in the Nov. 1 elections, yet the vote is in many ways about him.

Turks will participate in their second election in five months after the previous round on June 7 failed to give any single party a majority and subsequent attempts at forming a coalition proved fruitless.

Erdoğan’s ruling Justice and Development Party, known by its Turkish acronym AKP, suffered a significant setback in the June vote losing its parliamentary majority for the first time in thirteen years.

Erdoğan has been firmly in control since 2003—first as Prime Minister, and since 2014 as President. He wants to rewrite the constitution and transform Turkey from a parliamentary into a presidential form of government – which would give his post more power.

However, those plans were spoiled by simple math. AKP needed to secure a two-thirds majority in parliament to enable it to rewrite the constitution. It won only 258 seats in June, short of the 367 needed.

Now, however, the Turkish electorate’s support for HDP may have eroded as a result of developments over the summer that have left Turkish society polarized along ethnic and political lines.

The peace process between the Turkish government and the Kurdistan Workers’ Party (PKK) has broken down. The Islamic State has been blamed for deadly bombings in Turkey, including in the capital Ankara, that the AKP has used as a justification for a strong leader (hint, Erdoğan); and the Turkish military is targeting Kurdish rebel groups, including one supported by the United States, in Iraq and Syria.

How will all this play out on Nov. 1? Will Demirtaş’ HDP suffer at the polls; and will, as a result, Erdoğan’s dream of claiming more power be realized?

Aaron Stein, a Nonresident Senior Fellow in the Atlantic Council’s Rafik Hariri Center for the Middle East, discusses these questions and more in an interview with the New Atlanticist’s Ashish Kumar Sen. Here are excerpts from the interview.

Q: What is the likely outcome of the election on Nov. 1?

Stein: All the polls suggest that we are going to see a repeat of the June 7 election where the AKP will fall short of getting the required seats it needs in the parliament to achieve even just a bare majority of 276 seats. So it will not be able to govern alone.

The Kurdish nationalist party, the HDP, also looks on track to easily pass the 10 percent election threshold. There are some indications in certain polls that the AKP is on a slight uptick and that it has picked up a percentage point or two in the past month and that they have been able to pull from the far-right party, the Nationalist Movement Party (MHP), but there doesn’t seem to be any hope of the party getting over 276 or making that final push before the elections.

Q: So what happens next?

Stein: That’s a question everybody is asking in Turkey. When you have a repeat of the election and you have an AKP that gets somewhere between 258 and 262 seats what will change this time to allow for the major parties to come to an agreement on a coalition government? The most likely party to form a coalition with the AKP remains the CHP (the Republican People’s Party), the main opposition. Such a coalition would be narrow in focus—probably focused on economic reforms—and perhaps have a consensus on some constitutional language changes. In order to do that, the CHP has been clear that the AKP will have to abandon certain elements of its education policy, and the AKP has said it is not prepared to do so. There are also some disagreements [between the AKP and the CHP] about foreign policy.

Q: If the AKP comes to power in a coalition can Erdoğan rewrite the constitution and turn Turkey into a presidential system?

Stein: No. Before the June 7 election, the issue was if the HDP passed the 10 percent threshold the AKP would not have a chance of getting 330 seats. That is the minimum they would need to independently draft the constitution and then take that constitution and pass it out of the parliament and on to a public referendum. In this election they definitely will not be able to do that, so, for now, the presidential system is really not an issue.

The AKP has changed its electoral strategy a little bit in that they are not focusing on the presidential system. Their slogan is very much, ‘A vote for AKP is a vote for stability.’

Q: To what extent is this election a referendum on President Erdoğan?

Stein: The last election was a referendum on the President. Definitely. The HDP and the greater opposition managed to do that quite successfully—to turn the election into a referendum on President Erdoğan. The AKP played into their hands.

This time the AKP is trying to change it around a little bit and Erdoğan is definitely taking a little bit of a backseat. He is not holding massive public rallies like he did the last time, and [Prime Minister Ahmet] Davutoğlu is much more the face of this campaign.

The Erdoğan factor is certainly there. What does he do and what does the AKP do after it does not get the 276 seats it needs to govern independently?

Q: What has been the impact of the recent bombings in Turkey, the Turkish military’s operations against Kurdish groups in Syria and Iraq, and the breakdown of the peace process with the PKK in Turkey? Who has this hurt more—the pro-Kurdish HDP or the AKP and President Erdoğan?

Stein: The bombings have revealed intense political polarization in Turkey and that is reflected in the polls. There has been so little shift in the polls since a month before the June election. There are no swing voters left.

What happens is that these big tragic events, particularly the Ankara bombing, exacerbate social tensions inside Turkey. So you have a large swathe of the Kurdish political movement and its leaders— Selahattin Demirtaş and Figen Yüksekdağ—who openly accuse the AKP of being sympathetic to the Islamic State.

And then you have on the AKP side repeated rhetoric suggesting that a vote for Demirtaş and the HDP is a vote for the PKK and a vote for terrorism. This has infected the political campaign particularly after the Ankara bombing because there is an effort to say that this was a joint effort by the Islamic State and the PKK. They are clearly trying to tar the HDP with this attack. The HDP is dishing it right back saying, ‘No, the onus is on state negligence and the state’s complicitness.’ The political base for each party is then pulled in vastly different directions and this deepens the political polarization. There is little room for the two sides to come together.

Q: How might this election shape Turkey’s foreign policy, particularly its relationship with the United States and the European Union?

In terms of the relationship with the US, there was a breakthrough in the opening of the Incirlik air force base for the joint mission against the Islamic State. But the PYD issue inside Syria has crept its way into this late stage of the campaign. [Editor’s note: The Syrian Kurdish Democratic Union Party’s (PYD) military wing, the Kurdish People’s Protection Units (YPG), is backed by the United States. Turkey’s military has been targeting the group in Syria.] The AKP is definitely ramping up its attacks on the group as part of this broader narrative of trying to portray itself as the defenders of Turkish security against primarily Kurdish nationalist forces—the PYD, PKK, and the HDP.