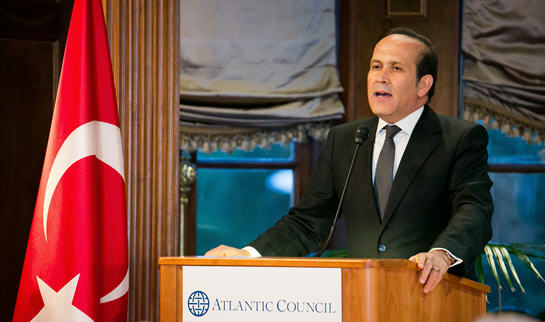 In the most powerful call for action yet by his government, Turkish Ambassador Namik Tan declared, “The implosion of Syria is a regional conflagration that threatens international peace and security. What we expect from our partners is a serious engagement and meaningful contribution to the resolution of this conflict.”

Speaking at the Atlantic Council Board’s Annual Meeting and Dinner, graciously hosted at his residence, Tan observed that, “The transatlantic alliance was never just a military arrangement. It was a union of vision, of a common outlook anchored in shared values. A relationship built to last in the face of adversity.” He argued passionately that, by failing to stop a “ruthless, autocratic regime” that is “obliterating its own people,” NATO was failing to live up to those ideals.

Noting that his country was hosting “80,000 guests from Syria”—referring to the huge refugee flow created by the crisis—Tan argued that it was time for others to step up so that Turkey is not “left alone in shouldering this burden.”

Further, he argued that the “failure” of the Security Council to act because of Russian and Chinese vetos should not be the end of the matter, citing the Responsibility to Protect doctrine. If NATO fails to “provide the right sort of outside support,” Tan contends, “the Syrians will rightly ask why they were abandoned in their darkest hour.”

What constitutes “the right sort of outside support”? Tan was less direct on that front. He declared that “we must act, act now, and act decisively. When we together and collectively show the right sort of leadership and resolve, others will follow, and those who oppose will know that we will not falter.”

Repeated references to Libya and Bosnia—where NATO intervened with military force—certainly suggests that Tan is advocating similar action in Syria. Given the futility of diplomatic measures over the past year plus, it’s hard to think of anything else that would be timely or decisive.

As legal scholars Paul R. Williams, J. Trevor Ulbrick & Jonathan P. Worboys argued persuasively in this space recently, Responsibility to Protect can be invoked absent Security Council authorization. For that matter, NATO intervened in Kosovo in 1999 without a Security Council resolution well before R2P was first articulated. If NATO’s members want to intervene to stop the atrocities in Syria, then, there’s little reason to think legal concerns will be an obstacle.

NATO Secretary General Anders Fogh Rasmussen has declared time and again that the Alliance has no such interest. As recently as last week, he emphatically reiterated that “NATO has no intention to intervene militarily in Syria.”

The Libya operation demonstrated yet again that any NATO operation of any scale can only take place with the United States shouldering the lion’s share of the burden, even if it pretends otherwise for domestic political purposes. Certainly, a president who felt the need to downplay his country’s role in an operation as comparatively small as Unified Protector isn’t going to take on something as massive as Syria with an election less than two months away.

Turkey’s efforts to gin up a NATO response over the summer in response to a Syrian shootdown of a Turkish F-4 were rebuffed.

Further, the recent upsurge in anti-American violence in the region—and especially the tragic and outrageous murder of America’s ambassador to Libya—has surely dampened whatever meager enthusiasm for intervention there might have been.

To be sure, NATO has in the past marshaled the political will to intervene in conflicts that had been festering longer than this one. Bosnia comes readily to mind. But Syria is out of area and NATO, frankly, is a shadow of its former self in terms of military power.

My strong guess, then, is that Tan will be disappointed in his wishes for swift, decisive action from the other Allies.