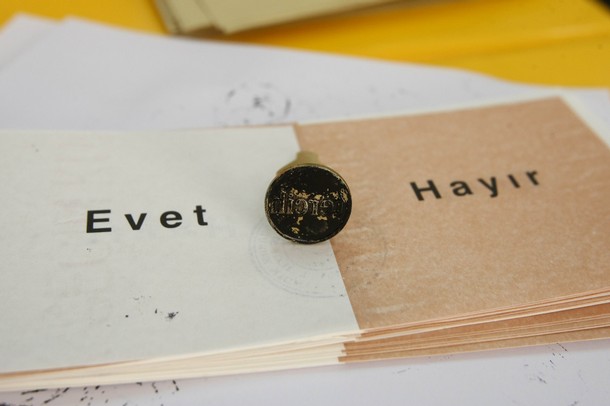 Turkey reformed its constitution over the weekend, in what Prime Minister Recep Tayyip Erdogan promised "will go down in history as a turning point in Turkish democracy." But there’s strong disagreement over which way it’s headed.

Both the United States and the EU lauded the measures.

Some 58 percent of Turkish voters Sunday voted in favor of a package of 26 changes to the country’s constitution, drafted 30 years ago after a 1980 military coup. The reform, championed by Erdogan’s ruling Justice and Development Party, weakens the position of the military in the judicial system, increases civil oversight of the courts and lifts immunity for senior coup leaders.

The package was drafted to make the country’s constitution fit for EU membership, a process that has been slowed down by Europe’s enlargement fatigue.  Brussels nevertheless hailed the reform plans.  EU Commissioner for Enlargement Stefan Fuele called the changes "a step in the right direction as they address a number of long-standing priorities in Turkey’s efforts toward fully complying with the accession criteria."

U.S. President Barack Obama in a telephone call to Erdogan acknowledged "the vibrancy of Turkey’s democracy as reflected in the turnout for the referendum that took place across Turkey," the White House said.

However, the reforms have revealed deep divisions in Turkish society. Large parts of the opposition say the constitutional amendments are part of a hidden agenda to undermine secularism and turn Turkey into an Islamist state.  Erdogan denies the charge vehemently but voting results reveal that while the country’s Anatolian provinces, in the east, backed his reform, the richer and more educated western regions voted against it.

And, Matt Duss reports for Wonk Room, prominent Western experts not forced to work with Erdogan and thus required to mind their words seem to agree:

Former U.S. Ambassador to Turkey W. Robert Pearson said that the results of the referendum, along with the last several years in Turkey, "represent a fundamental change in the Turkish political system, one that brings in a lot of people who hadn’t participated before." Pearson went on to say that what was happening in Turkey "is not about one man, Erdogan," but rather the culmination of attempts at reform that have been building for decades.

Daniel Brumberg of the U.S. Institute of Peace also reminded the audience that "the AK Party is not monolithic." In addition to it’s religious conservative base, "it has a strong business constituency whose primary goal is Turkish integration into Europe." In other words, the AK party is religiously conservative, pro-business party that’s against "judicial activism." This should sound familiar to Americans. But while it’s tempting — and not entirely inaccurate — to make comparisons between the AK Party and the GOP, this is actually pretty unfair to the AK Party, who are a dynamic, modernizing force pushing for greater political inclusivity.

But Time‘s Pelin Tergut ("Turkey: A Referendum for Democracy or a Strongman?") sees cause for concern:

The constitutional reforms won a 58% approval vote, a victory for Prime Minister Recep Tayyip Erdogan’s efforts to extend civilian control over the military, a powerful behind-the-scenes force in Turkey that has staged four coups in as many decades in the name of stability and secularism.

Yet the 42% no vote is significant. Turks remain deeply divided over ostensibly laudable democratic reforms, not because of their content but because of suspicions about the man driving them and his Islamist past. Many Turks are wary of Erdogan’s authoritarian streak — he has been nicknamed "Sultan Erdogan" — and question his motives. They have criticized him for cherry-picking European Union-inspired reforms only when it allows him to trim back his two biggest secularist opponents, the military and the courts. Those two institutions see themselves as custodians of Turkey’s secularism and have repeatedly clashed with Erdogan. As recently as 2008, the country’s top court almost banned his Justice and Development Party for antisecularism, as it had several previous parties with religious affiliations.

The Atlantic‘s Max Fisher ("When Islamism Is Liberal-Democratic") sees no contradiction between the two possibilities:

Turkey’s step away from secular rule comes in the form of Constitutional reforms that promote, more than anything else, liberal-democratic values. That’s not a coincidence. Islamic rule and liberal democracy, far from mutually exclusive in the Middle East, can go hand-in-hand.

Though we in the West typically focus on the militant extremists, they are merely the fringe of political Islam. Middle Eastern Islamic political movements are, more than anything else, populist. They represent the interests of the working class, oppose authoritarian rule by elites, tend to be a bit nationalistic, and are in general not so different from the populist movements of the U.S. and elsewhere. As Turkey’s Constitutional referendum demonstrates, they’re also quite good at bolstering democratic institutions. These reforms will bar gender discrimination, improve privacy and civil liberty protections, reduce the special legal protections afforded to elites, and overhaul the judiciary. These changes will roll back much of the military rule that, though decidedly non-democratic, has made Turkey so reliably secular.

Typically, we have sought to marginalize Islamist movements by supporting secular rulers. Clearly, those efforts haven’t really worked. They saw us allied us with unpopular and abusively rules such as the Shah of Iran. They also strengthened the militant fringes of political Islam, as with the violent backlashes against top-down secularization attempts in Saudi Arabia and Pakistan. Now the secular rulers are mostly gone and the Islamic movements, whether fringe or not, see us as an enemy, making them less likely to adopt American-style government. However, in Turkey we have a chance to encourage bottom-up liberalization by focusing on what we have in common, which it turns out is a lot, rather than our differences.

Basically it’s a trade-off between Turkey being more secular and more authoritarian, or more democratic and more religious. But this is exactly the problem with conservatives eager to portray "Islamism" as the enemy — not all forms of Islamism are sinister, and framing the issue in this manner essentially discredits all forms of religiously based political advocacy on the part of Muslims, even in their own countries, as proto-extremism. You can’t have a completely secular democracy in a country with a large number of observant Muslims anymore than you can have democracy in the United States without the Christian right. Enforcing secularism through authoritarianism can have the opposite of the intended effect, both strengthening the popular support of Islamists while potentially pushing them toward radicalism.

Would we want a country that fell in line with every U.S. foreign policy stance? Not if the regime was to have any credibility with the Islamic world. No, ideally, the government would be just Islamist enough to be seen as preserving the nation’s religious and cultural identity, even as it aggressively modernized its society and connected its economy to the larger world. It would have an activist foreign policy that emphasized diplomacy, multilateralism and regional stability, while also maintaining sufficient independence from America to demonstrate that it was not Washington’s proxy, but rather a confident great power navigating the currents of history. In sum, it would serve as an example to its co-religionists of how a Muslim state can progressively improve itself amid globalization’s deepening embrace — while remaining a Muslim state.

An impossible package, you might surmise — unless you already realized I was talking about Turkey all along. Turkey’s ruling Islamist party, the AKP, ably led by Prime Minister Recep Tayyip Erdogan since 2003, has done all of this while simultaneously putting its own economic house in order, meeting the reform expectations of its rapidly expanding middle class, dealing with a stubborn Kurdish insurgency and avoiding the lapses into military dictatorship that have bedeviled its democracy in decades past (e.g., 1960-1961, 1971-1973, 1980-1982).

Daniel Larison of The American Conservative ("Constitutional Reform in Turkey") likewise sees little cause for concern:

The tradition of Turkish secularism has always been one imposed from above and in its most extreme form it is one that has been maintained by elite institutions against the will of the majority. We don’t usually regard the President’s ability to appoint federal judges as a particularly great danger, but somehow allowing the elected government to select most of the Turkish constitutional court is a threat.

It seems as if it was just yesterday when everyone was absolutely sure that Turkey had rejected the West and abandoned their ideas about joining the EU. Of course, that was because the Turkish government was acting as it if were the government of a sovereign and independent country, and a lot of people here were under the impression that Turkey was an American dependency. On the one hand, this referendum formally brings Turkey a lot more in line with European legal norms. Europe may not want Turkey, but the Turkish majority is still trying to meet Europe’s requirements. If this is what neo-Ottomanism in action looks like, it seems that the alarmists were wrong again.

But a friend who has just returned from one of his regular visits to Turkey tells me that such views are "naive, if well meaning."   He says the polarization is getting worse and that the "pressure on the parts of population that are not ostensibly practicing their Muslim faith will increase every day."

He refers me to a column ("Turkey faces the democracy test") by Sinan Ulgen, the chairman of the Center for Economics and Foreign Policy Studies in Istanbul, published in the FT on the eve of the referendum which notes that Turkey has none of the institutional safeguards common in Western democracies.

Turkish leaders are fond of presenting the country as a unique model combining modernity, democracy and Islam. The attractiveness of this model, which underpins the country’s growing regional influence, depends on the sustainability of these credentials. A genuine democracy however needs rules and institutions to limit the government’s freedom of action. Devoid of such a crucial system of checks and balances, Turkish democracy runs the risk of being taken hostage by elected but authoritarian leaders. This would constitute a significant setback for a democracy that has laboured for years to replace the cult of a strong and unimpeded leader by a shared belief in institutions and the rule of law.

While I share this concern over the move away from secularism in Turkey’s politics, I’m mostly concerned about what it signals about Turkey’s commitment to not only Western values but the West itself.   There are a lot of worrisome signs in this regard, including recent polls showing a radical dropoff in Turkish support for joining the European Union.

So far, at least, the U.S. government is publicly dismissing these concerns. Philip Gordon, the assistant secretary of state for European and Eurasian affairs, maintains that the bilateral relationship is "very important and strategic" and went so far as to proclaim, "We don’t have such an open and ongoing dialogue with any other country in Europe."