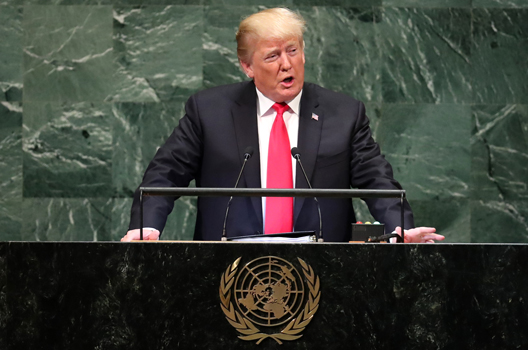 First, the good news. Amid the daily drama and questions about US President Donald J. Trump’s actual relationship with Vladimir Putin and his Russia, pieces of a defensible Trump foreign policy have emerged over the past two years.

The focus on a return of great power rivalry, a theme of the administration’s national security strategy, is a solid judgment. The administration’s challenge of China’s predatory trade and other aggressive practices is a worthy and overdue objective. The Trump administration was right to move beyond the Obama administration’s policy of “strategic patience” toward North Korea’s nuclear and ballistic missile program and replace it with a policy of maximum pressure. The president has a point when he challenges the assumptions of US military engagement in Afghanistan, Iraq, and Syria (Obama did much the same). Whatever the explanation for the president’s obsequious approach toward Putin, the administration’s actual policy toward Putin’s aggressive Russia is, as was said of Wagner’s music, better than it sounds.

Walking away from the Iran nuclear deal and the Paris climate accord were bad calls, in my view, which reflect mistaken assessments of both the costs and benefits of these deals. But those decisions at least arguably reflect a set of views.

Harder to understand are decisions which undermine the administration’s own policy goals. If taking on a China challenge is a principal objective of this administration, why pull out of the Trans-Pacific Partnership intended in part to achieve this objective and likely to be effective in doing so? Why spend political capital in trade fights with Europe when we would be better off enlisting the European Union in common cause with respect to our China policy? The administration’s maximum pressure policy toward North Korea was gaining traction, with strong United Nations Security Council resolutions passed and improved Chinese enforcement of them emerging. Why interrupt this momentum with the flimsy Trump-Kim Jong-un joint statement issued at the Singapore summit last July? Can anyone explain whether the United States is pulling out of Syria only when stated conditions are met or in any case?

Policy making is messy and hard. But competence in execution and at least attempts at substantive policy consistency are not optional. On this level alone, the administration needs to up its game.

What’s wrong with the Trump foreign policy cannot be fixed just through better execution or policy coordination, however. The underlying problem is that the president himself appears to reject, in principle, the fundamentals of what has been US strategy over most of the past one hundred years. That strategy, articulated by President Woodrow Wilson and every president from Franklin D. Roosevelt through Barack Obama, holds that US interests and values advance together; that the United States will prosper best in a rules-based world which favors democracy; and that the United States will find itself better off when other nations are as well. That non-zero sum view of the world and definition of national interests that left room for the interests of others worked out well both for the United States and the free world (as we used to say) that the United States has led since 1945.

But Trump’s worldview appears zero-sum, based on an assumption that US interests can only advance at the expense of the interests of others. Say that loudly enough and long enough and your friends might decide that you are serious and draw their own conclusions. When they do, how will we rally them to do some tough job with us somewhere in the world? Do we think we will never again need our friends?

The administration has trouble with the notion of alliances. The European Union can be frustrating to deal with on a day-to-day basis, but so can the US government. Let’s keep perspective: what’s more important, the occasional headache of dealing with the European Commission or the ability to approach strategic rivals, like Russia or China, from the stronger position which comes from having wealthy, productive allies?

Pushing the Germans and other European governments to spend more on defense is legitimate. But let’s remember why the United States decided to take responsibility for Europe’s security: we decided that two world wars were sufficient. So we took the lead in European security after 1945, we and our European friends got rich in the decades that followed, and there was no Third World War.

The president seems focused on short-term transactional criteria as the measure of US foreign relations. But “what have you done for me lately” may not be the best way to sustain US world leadership. The administration is right that great power rivalry has returned. On what basis will the United States challenge the great autocracies which may believe that their time has come? If we are just one more self-serving great power, are we more or less likely to attract the friends and allies we need to prevail?

Daniel Fried is a distinguished senior fellow in the Atlantic Council’s Future Europe Initiative and Eurasia Center. In the course of his forty-year Foreign Service career, Fried played a key role in designing and implementing American policy in Europe after the fall of the Soviet Union.