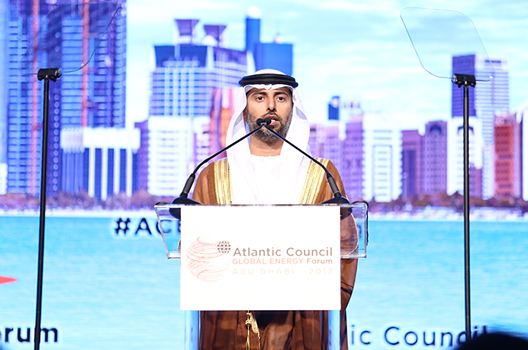 The changing dynamics of the energy landscape have undeniable geopolitical implications, said the United Arab Emirates’ Energy Minister, Suhail Mohamed Faraj Al Mazrouei, noting that his nation has made great strides toward establishing regional stability through the development of clean energy.

“In any geopolitical situation… you’ll find energy is either an enabler or an issue that you need to resolve,” Al Mazrouei said at the Atlantic Council’s Global Energy Forum in Abu Dhabi on January 12.

On January 10, the UAE launched its Energy Strategy 2050, which is focused on the incorporation of renewables. This is a major first step toward reinvigorating the UAE’s energy mix and ensuring the development of clean energy. The strategy is meant not only to drive the future of the UAE, said Al Mazrouei, but also to inform the efforts of other countries. “Everything we do, we do it to share knowledge with others. We are not going to be protective of our plans,” he said.

Tying environmental concerns to geopolitical stability, the minister said: “We need to plan, we need to work hard to achieve peace, and that peace cannot be achieved without reliable and sustainable sources of energy.”

Above all, Al Mazrouei said that the UAE is committed to designing its energy strategy in such a way as to ensure the happiness of its people. “We put achieving the happiness of the people as important as affordability, reliability, and sustainability of the energy form,” he said. “If they are not happy because of the environment or the cost, then you will have problems.”

The UAE’s energy roadmap was developed in conjunction with all stakeholders in the country’s energy market, as well as with other regional players, said Al Mazrouei.  He called for the continuation of that discussion between policy makers and industry officials at the Forum.

In a conversation about the global energy agenda for 2017, Al Mazrouei conveyed his optimism about the future of renewables and said that the UAE is taking innovative steps to increase the production and use of renewable energy. He described plans, informed by recent technological breakthroughs, for the storage of solar energy, as well as the incorporation of hydro energy into the UAE’s energy mix. Though these plans have not yet been realized, Al Mazrouei asserted: “We keep dreaming and making those dreams.”

However, “we are realistic in making our plans,” said Al Mazrouei. “It’s not aspirational,” he said, “it’s realistic and it’s based on our knowledge.”

In light of these practical concerns, oil will still play a significant role. Though the oil market is in a precarious position, Al Mazrouei said that oil prices are seeing “a fair movement toward to correction,” in light of a deal recently negotiated by the Organization of the Petroleum Exporting Countries (OPEC). In January of this year, a declaration of cooperation between twenty-four oil-producing countries, thirteen within OPEC and eleven non-OPEC, came into force with commitments from each of the signatories to reduce oil production. The deal is designed to increase the price of oil. Ultimately, with less oil on the market, the price of oil will rise. This agreement marks historic international cooperation and commitment to restoring balance to the energy market. “For the first time, we have seen a coalition of other producers outside OPEC who are agreeing that we should help the market. I am expecting that coalition to increase,” said Al Mazrouei.

However, he said that “the real correction will happen when we see movement from all of the concerned nations who came together to try to help the market and help bring in more investments to the market.” Though the average price of a barrel of oil has not yet arrived at an ideal range, according to Al Mazrouei, “we are on the right trajectory for balancing the market.”

Though geopolitical circumstances in each of the countries involved will determine their oil production, Al Mazrouei said he trusts the countries to enforce their commitments to the OPEC deal.

Image: “In any geopolitical situation… you’ll find energy is either an enabler or an issue that you need to resolve,” said the United Arab Emirates’ Energy Minister, Suhail Mohamed Faraj Al Mazrouei at the Atlantic Council’s Global Energy Forum in Abu Dhabi on January 12. (Atlantic Council)