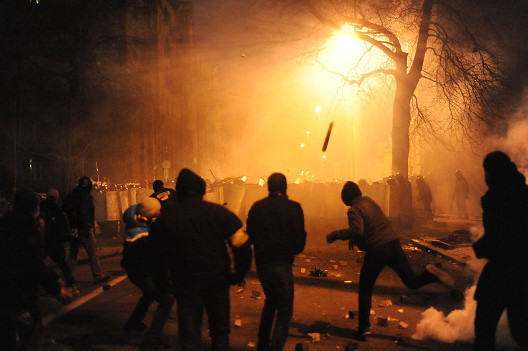 Every Sunday for the past eight weeks, several hundred thousand Ukrainians have gathered in Kyiv’s Maidan Nezalezhnosti (Independence Square) to protest government policies. Initially, in late November, they assembled to denounce their government’s last-minute rejection of an association agreement negotiated with the European Union. After police attacked one of those demonstrations, the crowds mobilized against the security forces’ brutality. Still later, they gathered to denounce President Viktor Yanukovych’s economic agreement with Russia that many believe threatens Ukraine’s long-term sovereignty. This week, their list of discontents was augmented by the government’s passage of eleven laws drastically limiting freedom of protest, threatening internet freedom, and circumscribing freedom of expression.

Tragically, Yanukovych has ignored their calls for dialogue and compromise. Instead, he and his government unleashed brutal police violence against protesters and journalists. Thugs and gangs in plainclothes have taken to abducting ad beating civic leaders.

On Sunday, public frustrations boiled over into violence. As 200,000 people protested on the Maidan, a few thousand broke away to attack police blocking nearby streets.

The fighting has continued since then, and for the first time in independent Ukraine’s 23-year history protesting citizens have been killed by their government.  One protester who had been throwing fireworks died on Tuesday after police mercilessly beat  him and threw him from the top of a soccer stadium colonnade. Two are known to have died from gunshots fired by snipers.  Wednesday evening, physicians treating demonstrators suggested that a total of five people have been killed by police. The body of Yuri Verbytsky, a 50-year-old physicist who was abducted Tuesday morning with civic leader Ihor Lutsenko, has been found in a rural area near Kyiv’s airport. (Lutsenko was held for 15 hours and savagely beaten.)

The violence and repression is unlikely to end in the coming days. And Wednesday afternoon, January 22, there was fear the government would soon attempt forcibly to take over the Maidan.

This escalation of state violence carries major risks for President Yanukovych. Unlike Russia or Belarus, where dictatorial rule was introduced gradually and by leaders who then had approval ratings of over 70 percent,  Yanukovych is turning to dictatorial mechanisms and violent repression at a time when polls measure his support at around 25 percent.

Moreover, Ukraine remains sharply divided between east and west.  In Kyiv, and in central and western Ukraine, sentiments are overwhelmingly against Yanukovych. There, local governments and legislatures are likely to declare noncompliance with the orders of his central authorities. And as has been predicted by Ihor Smeshko, the former head of the Ukraine Security Service (SBU, the state’s main police and intelligence agency), this kind of confrontation increases the risk that  the military and the security services will split along this east-west  divide.

Meanwhile, former Defense Minister Anatoly Hrytsenko, who served in that post from 2005 to 2007, reminded the Yanukovych camp that several million Ukrainians own guns, and that they include a large number of retired military snipers.

All this points to dire times in Ukraine.

While the government could still relent and a compromise is possible, even if Yanukovych does not pull back from using force, the result will likely be a standoff with the opposition that eventually leads to regional cleavages and months of disorder in the capital Kyiv.

Having come to power promising restored stability and economic growth, Yanukovych gradually rid himself of competent managers and expanded the reach of his family and trusted cronies. He simultaneously proceeded to enrich his son, and to build a vast palace outside Kyiv as his “stately pleasure dome.”

Yanukovych’s backers – many of Ukraine’s rich and powerful business leaders – did not back him to create this mess. Yet, so far, although they have dozens of allies in Yanukovych’s ruling faction, the Party of Regions, they have not signaled their opposition to the building of a repressive police state in Ukraine.

This business elite, with its ability to tip the balance in parliament, remains one of the few hopes of pushing Yanukovych back from his calamitous policies.

But this elite is unlikely to act so long as business leaders believe Yanukovch can assert his full authority. Should he fail to establish control, they will likely act to avert a protracted and economically debilitating crisis.

Ukraine’s fate will be decided in the coming weeks. If a dictatorship triumphs in Kyiv, it will markedly set back Europe’s hopes of a significantly enlarged European democratic space.

The conflict still can be walked back from the precipice through quick negotiations, and a stand-down by the Yanukovych camp. But Yanukovych and the hardliners who now shape his policy need to hear from Western leaders, including President Obama, directly and in no uncertain terms.

In the meanwhile, we can only watch events unfold, hoping that the forces of reason on both sides find a way to find compromise and restore national consensus.  Alas, there is little sign of such hope on the streets of Kyiv this night.

Adrian Karatnycky is a nonresident senior fellow with the Transatlantic Relations Program.