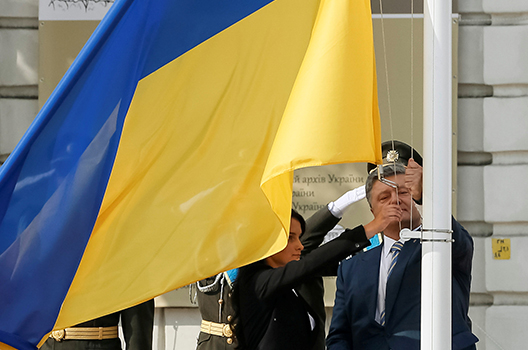 Ukrainian President Petro Poroshenko takes part in a ceremony marking the Day of the State Flag, on the eve of the Independence Day, in Kiev, Ukraine, on August 23. (Reuters/Gleb Garanich)

Twenty-five years ago, after seventy years of Soviet dominance and over three hundred years of rule by Russia, Ukraine declared its independence. This occurred after a national referendum in which over 90 percent of Ukraine’s voters chose independence. Every part of the country, including Crimea—which at that time had a population that was over 60 percent ethnic Russian—chose independence by a majority vote.

The newly independent state faced formidable challenges. Would the Russophone east split from the European-looking west, or would Ukraine develop a national identity that took into account regional differences? Equally important, could Ukraine break the hold of its post-Soviet elite and create a viable democracy and market economy? Would Ukraine’s de jure independence become de facto independence?

All three of us were heavily engaged with policy development related to Ukraine and Russia in the mid-1990s. In retrospect, some of our concerns at the time were overblown. The infamous CIA National Intelligence Estimate, for example, which predicted that Ukraine might split in two, proved spectacularly wrong. Ukrainian politicians, despite their many flaws, largely managed the substantial differences in outlook between the country’s east and west.

Ukraine has also done an admirable job of containing the intolerant demons of its not-so-distant past.  Anti-Semitism and difficult relations between Ukrainians and Poles were a feature of life in Ukraine for centuries. Today, dialogue between ethnic Ukrainians and Jews, and between Ukrainians and Poles, has become a feature of Ukrainian life. Moscow’s claims in 2014 that fascists had come to power in Kyiv and that anti-Semitism was rife proved to be Kremlin-concocted fantasies. In the past two years, extreme nationalist politicians have fared poorly in Ukrainian politics.

Sadly for Ukraine and for the people of Russia, however, Russian President Vladimir Putin has pursued a policy of growing authoritarianism at home and an ideal of empire abroad. This has sparked a major challenge for Kyiv. In a sense, Putin bet on the flawed analysis of the 1990s’ National Intelligence Estimate when he began his covert war to foster separatism in the Donbas. The unwillingness of most ethnic Russians and Russophones in the Donbas to rise up explains why the Kremlin needed to send in regular army units in August 2014 and again in February 2015 to keep the so-called “Donetsk and Luhansk Peoples Republics” in operation. In fact, Putin’s illegal seizure of Crimea and war in the Donbas have fostered a modern Ukrainian consciousness and patriotism that is driving the country forward toward Europe and away from an imperial Russia.

When Russian-led separatist forces were moving west from Donetsk in spring 2014, observers predicted that Ukraine did not have the means or will to stop them. But in June 2014, newly elected President Petro Poroshenko began a counteroffensive that only regular Russian troops could stop. Since then, Kyiv has essentially fought Moscow to a standstill. All of this is a major achievement for Ukraine.

But not all in Ukraine is rosy. Since independence, Ukraine by and large has not enjoyed enlightened or reform-minded political leadership. Corruption has characterized the political system and the economy, and economic growth has therefore been slow. Ukraine has had an active, forward-looking civil society that has pushed for change, albeit at a slow and uneven pace. The Orange Revolution seemed to promise great reform, but while President Victor Yushchenko governed in a democratic manner, he did not address corruption.

The Euromaidan and elections that followed brought in Poroshenko and the most reform-minded government and parliament in Ukraine’s history. The achievements of this new government are significant. The move to market pricing in natural gas has removed the country’s major source of corruption and hugely reduced the deficit. The government has also established a transparent system for government procurement and undertaken a major reform of the banking system. That said, the government has not moved as rapidly on reform as it should, and corruption continues to be a major scourge.

Were it not for the Kremlin’s ongoing aggression, Ukraine would be in a stronger position to move forward on needed reforms. It must find a way to do both simultaneously.

The United States must help it do so. A democratic, reforming Ukraine that maintains its territorial integrity and policy independence is very much in the interest of the US. Washington has provided substantial support to Ukraine over the past twenty-five years and it should continue to do so, while also robustly pressing Kyiv to take the steps that will build a stronger and more resilient state. Ukraine’s success matters not only for Ukrainians, but also for the kind of stable and secure Europe that has been a US policy goal since the end of the Cold War.