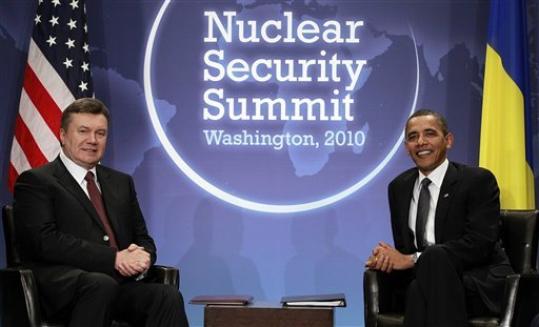 Since this winter’s presidential election, in which pro-Russian Victor Yanukovich emerged the victor, Ukraine has experienced a massive turnaround. Its politics, security policy, cultural and language policies and energy policy all look toward Moscow for guidance. U.S. and European commentators have begun to speak about the loss of Ukraine. Alexander J. Motyl of Rutgers University recently wrote that "for the first time in 20 years, Ukraine’s disappearance as a state is imaginable." One thing is increasingly clear: Hopes for Ukraine’s NATO membership in the foreseeable future have been dashed.

For the U.S. and the countries of NATO and the European Union, no aspect of Ukraine’s "Russianization" is more acute than that in the energy sector. The trans-Atlantic community has lived through four energy crises spurred by Russian attempts to exert control over Ukraine’s energy sector. Two of those involved gas cutoffs for EU consumers in the dead of winter.

Last month, Russian Prime Minister Vladimir Putin made a public offer to Ukraine to merge the two countries’ energy systems under the control of Gazprom, Russia’s state-controlled behemoth energy monopoly. The underlying message from Moscow was that Ukraine and Western countries could avoid future energy crises by giving in to Russia’s demands. But, on May 14, Mr. Yanukovich rejected Mr. Putin’s offer, saying only a 50-50 arrangement would be acceptable. In an interview with the BBC on the same day, he made it clear that Ukraine is holding out for investment in its energy sector from Western companies.

Mr. Yanukovich also lamented that the EU had not responded as quickly as Russia on issues such as the easing of visa restrictions for Ukrainians traveling to the EU, trade with the developed economies of Western Europe and "associate EU membership." In moving into Russia’s embrace, Mr. Yanukovich is pleasing both his geopolitical backers in Moscow and the majority pro-Russian constituents who voted for him. However, he is pointedly keeping an outstretched arm to the EU and other Western actors, particularly on energy.

If Western companies and institutions do not take advantage of this opportunity, they will only have themselves to blame when the Kremlin has even more leverage to stop and start energy deliveries to the EU. A number of private-sector actors are holding themselves back from investing in Ukraine because they fear the consequences of getting involved in the country’s notoriously corrupt and murky energy sector. But that is where Western institutions, such as the EU and the Energy Community (EC) – Europe’s energy reform club – come in.

Mr. Yanukovich’s administration has indicated that it wants to join the EC, but so far, EU officials have only offered "talks" in return. Energy reform in Ukraine has thus become a chicken-and-egg problem: The private sector is waiting on the institutions, but the institutions will only be given an incentive to act once Western companies get the ball rolling. Meanwhile, everyone but Russia loses.

The only actor that can bring all parties out of this stalemate is the U.S. During Mr. Yanukovich’s trip to Washington for the April nuclear summit, the Obama administration pledged $250 million to help safeguard the Chernobyl nuclear disaster site. Washington has not given up on Ukraine, but it is searching for where it can best use its leverage. The answer is in two areas: energy investment and the relationship with Russia. U.S. companies should be encouraged to kick-start the energy-reform process, and if Western institutions are too slow to follow suit, they should begin working with Ukrainian civil society groups that encourage energy-sector reform.

It is now a foreign-policy maxim that without Ukraine, Russia ceases to be an empire. For this reason alone, Russia will always "care" more about Ukraine than any Western actor. It is with this in mind that the Obama administration can use its closer relations with Russia to hammer out a deal under which Western companies and institutions bring reform and stability to Ukraine’s energy sector without raising Russia’s ire. Ukraine is not yet lost: It just requires subtle engagement by the West.