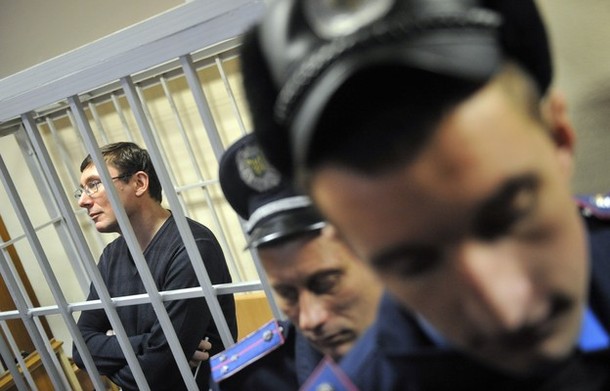 Yuriy Lutsenko, former Interior Minister in two governments led by Yulia Tymoshenko, was sentenced this week to four years imprisonment and given a three years ban from public office.

The sentence prevents Lutsenko from participating in the 2015 presidential elections, where Viktor Yanukovych will seek a second term. Lutsenko, the scourge of the nexus of Yanukovych, the Party of Regions, and organized crime, was jailed by the ‘virtual mafia state’ he sought to dismantle as Interior Minister.

Spanish National Court Prosecutor Jose ‘Pepe’ Grinda Gonzalez first coined the term ‘virtual mafia state’ in US diplomatic cables sent from Madrid. Grinda considers Belarus, Chechnya and Russia to be virtual ‘mafia states’ and said that Ukraine is destined for a similar status. For each of those countries, he alleged, one cannot differentiate between the activities of the government and OC (organised crime) groups.”

The referenced US diplomatic cable was written in February 2010 – the same month that Yanukovych was elected Ukrainian president. Two years on, the sentencing of opposition leaders Tymoshenko and Lutsenko shows that Grinda’s predictions that Ukraine would become a ‘virtual mafia state’ were on target.

In his 2011 book Mafia State: How one reporter became an enemy of the brutal new Russia, former Guardian Moscow correspondent Luke Harding discusses ten criteria that make Russia a “virtual mafia state” and as shown below, these criteria apply to Ukraine (London: Guardian Books, 2011).

First, security services (FSB in Russia, SBU in Ukraine) are over-manned successors to the Soviet KGB and all-powerful. The FSB and SBU have a degree of unbridled independence that did not exist for the KGB, controlled by the Soviet Communist Party. The FSB, Harding writes, offers protection to gangsters and extorts bribes from the private big business sector and the FSB, and ‘employs the mafia for its own opaque missions (p. 214).’ Russian leaders protected organized crime boss Semion Mogilevich, who is on the FBI’s most wanted list and was heavily involved in Russia’s and Ukraine’s energy sector.

Second, Soviet political culture of xenophobia, spy-mania and conspiracy theories run through the working culture of the FSB and SBU who assume foreigners (diplomats, journalists, businesspersons, and human rights activists) are Western spies. The FSB and SBU believe democratic revolutions are, ‘carried out by CIA spies carrying bagfulls of dollars (p. 50).’ Putin, Yanukovych, the FSB and SBU are, ‘suspicious, deeply paranoid, unfamiliar with the non-Russian world, and prone to irrational or emotional acts (p. 48).’ The former Soviet KGB influences the working culture of the FSB and SBU, meaning officers in both security services continue to believe their raison d’etre is to protect the state and ruling elites and destroy enemies perceived as a threat to them.

Third, ruling elites are unaccountable and seek a monopolization of economic and political power. Russians and Ukrainians feel powerless in the face of an unaccountable and mighty state and believe they have no influence over the authorities. Russian and Ukrainian elites have never gone on trial for high level corruption except when politically motivated, as in the cases of Mikhail Khodorokovsky in 2003 and 2011 in Russia and Tymoshenko and Lutsenko in 2011-2012 in Ukraine.

Fourth, elites have no remorse for crimes they have committed and rule with impunity. Andrei Lugovoi was nonchalant when the British Criminal Prosecution Service accused him of assassinating Alexander Litvinenko in London in 2006 and demanded his extradition. Harding writes about Lugovoi, “Some vital moral part is empty and lacking, as if someone had hacked off his conscience with a pair of giant scissors (p.39).” Ukrainian leaders such as former President Leonid Kuchma lack moral compasses as seen in him never showing any remorse for accusations of his alleged role in the 2000 murder of journalist Georgiy Gongadze. Kuchma continues to claim that the Gongadze murder was a U.S.-backed conspiracy to replace him with Viktor Yushchenko. Harding writes, “The result is a lack of empathy for anyone who disagrees with him. Under his tutelage Russia has become bullying, violent, cruel and – above all – inhuman (p. 292).”

Fifth, show trials of political opponents instill fear, subdue and marginalize the opposition so that ruling elites can continue to be unaccountable. This is as true of Khodorkovsky’s imprisonment in Russia as it is of Tymoshenko’s and Lutsenko’s in Ukraine. More than 100 activists and journalists have suffered political persecution during Yanukovych’s first two years in power.

Sixth, the model of the Soviet Communist Party is used for Putin’s Unified Russia party and Yanukovych’s Party of Regions, allies since 2005. As political machines they act as bulldozers destroying everything in their path while acting as vacuum cleaners which “expropriate” the country’s wealth. Both political parties promise modernization but instead bring Brezhnev-era stability and stagnation.

Seventh, eclectic neo-Soviet nationalism permeates the Putin and Yanukovych political systems. Harding says Putin “created a pastiche neo-Soviet Russia (p. 8).” Putin and Yanukovych’s political systems combine nostalgia for the Soviet Union, promote prioritization of Russian language and culture, hatred of Ukrainian nationalism and deep distrust of the West, particularly the US, Germany, and NATO. Claiming a monopoly on patriotism, they accuse the democratic opposition of being unpatriotic agents of the West. The imprisonment of Tymoshenko, Lutsenko, and others by the Yanukovych administration are the first cases of political repression since the 1970s.

Eighth, Russian and Ukrainian kleptocracy merge organized crime, corruption and the state in a closely bound nexus. Organized crime has close ties to senior leaders of both countries. Harding describes Russia as a nexus of: “crime dons, trade attaches, ministers, money laundering, smuggling, kidnapping, and a security service that employs the mafia for its own opaque missions (p. 234).” The United Russia party, pro-Putin Russian Liberal Democratic Party, Ukraine’s Party of Regions, and Russian nationalist parties in the Crimea have provided protection to criminals and members of organized crime.

Ninth, virtual policies are disconnected from reality and plans for economic modernization, fighting corruption, and European integration fall short of promises. As in the USSR, where there was a gap between official propaganda, constitutions and everyday reality, so today in Russia and Ukraine. Russia does not seek NATO and the EU membership because it does not want to be dictated to by Brussels and therefore defines its political system as a ‘sovereign democracy.’ Ukrainian leaders claim they are building democracy and seeking integration into Europe while destroying democracy and isolating Ukraine internationally.

Tenth, Russian and Ukrainian Soviet doublespeak continues to influence Russian and Ukrainian contemporary politics and international affairs. Putin and Yanukovych use Soviet style rhetoric to condemn Western criticism of attacks on democratic freedoms. The Yanukovych administration blames the West for Ukraine’s failed bid to integrate into Europe while steadfastly ignoring growing international criticism that its policies are rolling back democracy and closing the door to Europe.