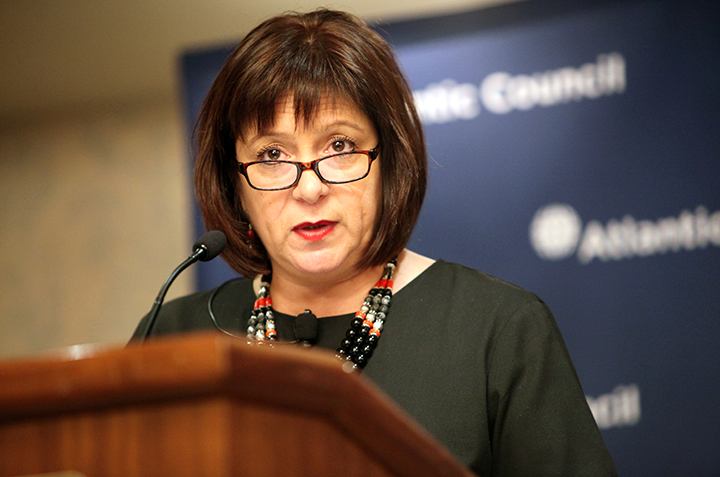 Jaresko spoke at an event hosted by the Atlantic Council hours after learning she had lost her job in a government shakeup—the most significant since 2014—marked by Prime Minister Arseniy Yatsenyuk’s resignation and the appointment of a new cabinet of ministers headed by Volodymyr Groysman as the new Prime Minister.

Disbursement of a third tranche of loans from the $17.5 billion IMF bailout package has been delayed amid political turmoil in Ukraine.

Describing the IMF package as a “huge asset,” Jaresko said: “A new Ukrainian government must stick to the IMF program and implement it fully, including painful reforms, such as continuing to increase gas tariffs.”

Ukraine must also “continue down the path of fiscal restraint” and “shrink our budget deficit and live within our means,” she added.

Besides providing financial support, the IMF program incentivizes the Ukrainian government to support reformers and “fosters the reform agenda,” she added.

Over the past two years, Jaresko has worked with the IMF to implement monetary and financial reform. As such, Jaresko and her team stabilized Ukraine’s corruption-ridden economy and improved domestic and foreign investment climates.

“Compared to a year and a half ago, when no one knew whether we would be able to exit…the disastrous cycle of inflation and devaluation that hurts the average Ukrainian citizen the most, our economic situation has dramatically improved. We have bottomed out and turned the corner,” said Jaresko.

Yatsenyuk left office amid criticism that his government had been too slow to implement reforms. Jaresko warned that populism poses a real danger in Ukraine.

“Only if we fully implement the IMF program can we renew and strengthen the trust and confidence not only of our international financial partners, but also of the business community,” the former Finance Minister said.

Jaresko was in Washington on the eve of the World Bank and IMF Spring Meetings, which are scheduled to commence on April 15. She was joined at the Atlantic Council event by Andrius Kubilius, a former Prime Minister of Lithuania; Anders Åslund, a Resident Senior Fellow at the Council’s Dinu Patriciu Eurasia Center; and Susan Schadler, a Senior Fellow at the Center for International Governance Innovation. Domenico Lombardi, Director of the Global Economy Program at the Center for International Governance Innovation, moderated the discussion.

Jaresko said the security situation in eastern Ukraine—Donbas in particular—is key to the success of the country’s economic reforms. “Ukraine is committed to peace, but it requires full implementation of the Minsk agreements by the aggressor, first and foremost,” she said, referring to Russia, which annexed Crimea in March of 2014 and supports separatists in eastern Ukraine.

The Minsk agreement, also known as the Minsk Protocol, calls on Ukraine, Russia, and the Russian-backed separatists in Donetsk to cease fighting in the Donbas region. A ceasefire agreement collapsed in January 2015 after separatists captured Donetsk International Airport. Continued civil unrest in Donetsk overshadows the economic recovery seen in the western parts of the country.

Advice for the new government

The new Ukrainian government should focus on four key reform strategies to ensure positive growth, according to Jaresko: continue deregulation procedures; conduct privatizations in a transparent manner; continue tax and customs reductions; and stay in line with the IMF reform program.

“If stabilization is to be pursued in as disciplined a manner, as it has been in the past two years, there is a lot more that is going to have to happen to get Ukraine into a growth situation that is acceptable,” said Schadler.

“Ukraine is balancing on these areas in a very fragile manner,” she added.

Outside of IMF involvement, Jaresko said that Western, and specifically US, engagement with Ukraine is necessary for political and economic stability in Ukraine.

“I am certain that the progressive forces in Ukraine politics will prevail. To accelerate and support this process the West should and must stay engaged…The United States tends to underestimate its leverage in the country and region,” Jaresko said.

Continued conflicts in Ukraine’s east and a new government rising out of an era of corruption will define Ukraine’s immediate future. Despite the challenges, Jaresko was hopeful about Ukraine’s future.

“I prefer to not look at the glass half empty. I look at it as three-quarters full,” she said.

Image: “A new Ukrainian government must stick to the IMF program and implement it fully, including painful reforms, such as continuing to increase gas tariffs,” Ukraine’s former Finance Minister, Natalie Jaresko, said at an event hosted by the Atlantic Council on April 14. (Atlantic Council/Victoria Langton)