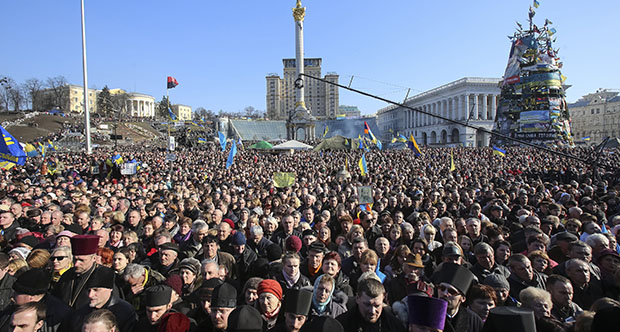 Ukraine’s interim government took office twelve days ago to face a Russian invasion, a national bankruptcy, and deep regional and political divides. As its top officials prepared to visit Washington this week to seek support, an Atlantic Council delegation first went to Kyiv to meet them, visit the Maidan, and assess a country balanced on a knife’s edge.

The government of Prime Minister Arseniy Yatsenyuk has resolve, moderation and public support – but is seeking a coherent strategy, notably for confronting Russia, according to the Council’s team, led by Executive Vice President Damon Wilson. The US and its allies should work with Ukraine to build that strategy, said Wilson and other Council analysts, senior fellows Adrian Karatnycky and Ian Brzezinski.

Among the team’s observations:

Ukraine’s crises have led to a nationalist but moderate political mood.
“I found a public sense of national identity and purpose that is much stronger than what I witnessed when I was living in Kyiv in 1993 and ‘94,” said Brzezinski, who served then as a volunteer adviser to foreign affairs and defense agencies of the newly independent Ukraine.

Even in the face of Russia’s invasion of Crimea, “the mood of the public is not moving in the direction of war nationalism,” said Karatnycky, an analyst and author on Ukraine and the former Soviet Union, and former president of Freedom House. Opinion polling shows “a decline … since the invasion of Crimea in support for the far-right parties that have been part of the broad protest movement against corruption and the government of former President Viktor Yanukovych.

Political moderation is showing in polls for the presidential election.
In Ukrainian opinion polls for the May 25 election, “the leaders are pragmatic businessmen like [Petro] Poroshenko, or centrists like [Vitaliy] Klitschko, or even Yulia Tymoshenko or [Serhiy} Tihipko,” said Karatnycky. “They’re getting three-quarters of the people who’ve decided which way to vote, and roughly three-quarters of the [voting] population has already made up its mind for the presidential election. The indicators are down for the far right, down for the separatist left, and up for these moderates. In fact Poroshenko, who’s the leading candidate now by far, about 10 points ahead of Klitschko, served in the first year of the Yanukovych government. So Ukrainians are actually looking for leaders who are not highly partisan, highly extreme and looking for revenge. So it helps that Ukraine’s mood is pushing away these destabilizing internal pressures of incipient radicalization.”

The new government is grasping for a strategy.
After President Viktor Yanukovych fled his crumbling administration in Kyiv on February 22, the leaders of the months-long mass protests at Kyiv’s Maidan, or central square, effectively nominated Arseniy Yatsenyuk as interim prime minister, a decision approved by the Rada, or parliament. Yatsenyuk’s administration, drawn largely from moderate and right-wing opposition parties, has been in office twelve days. “The new government has enormous resolve, but they have not had time to build a coherent strategy” for confronting Russia and their other challenges, said Wilson. “They do have a guiding principle that says ‘we’re the product of the Maidan, with its commitment to non-violence, and we’re going to work non-violently to reverse Russia’s aggression,” Wilson said.

The government is hampered by divisions from the 2004 Orange Revolution.
Yanukovych’s ouster by overwhelmingly peaceful demonstrations “gives Ukraine a second chance” at democratization, said Wilson, a decade after the peaceful Orange Revolution protests forced the holding of a free presidential election. The more representative government that emerged from that vote fell into factional infighting that led ultimately to its electoral defeat by Yanukovych in 2010. Now, the Maidan movement and Yatsenyuk’s government are “burdened by the failure of the Orange Revolution, as a result of their own divisions the last time,” Karatnycky said. “Yulia Tymoshenko [who co-led the Orange Revolution and then served as prime minister in the fractious government that followed] is still a divisive figure.”  The interim government is not a broad one, Karatnycky noted. Klitschko, the former professional boxer and head of the anti-Yanukovych UDAR party, and legislators of Yanukovych’s Party of Regions “are supporting this government from the outside, but did not join it,” he noted.

President Putin’s strategy: disruption, including ‘black ops,’ against Ukraine.
Russian President Vladimir “Putin’s aim is to create uncertainty, disruption and diversion, so that the democratic Ukrainian project fails, so that its government collapses” and can be replaced with a more Russian-friendly regime, said Karatnycky. Putin will act “with every tool he has” – propaganda, threats, economic pressures.  He added: “We all understand that Russia has disproportionately large influence because it’s a nuclear power and has great military capabilities, and because of its energy and raw materials holdings. But to keep perspective on Russia’s global disruptive capabilities, we should remember that its economy, its GDP, is roughly the size of Italy’s.”

Debate: How far is Putin likely to invade Ukraine?
Karatnycky and Brzezinski debated how far Putin’s military aims extend. “I don’t think he’s going to operations on the mainland. …  “I think he’s going to accept Crimea as an independent entity and build up its military potential,” Karatnycky said, notably with the recruitment of local Russian residents into militias commanded by Moscow. “Part of Putin’s game is that these soldiers without insignia, these men in green will become a military force for black operations where he has some deniability. At the same time, he’ll offer the West a public face of cooperation. As a sop, to demonstrate Russia’s supposed pullback from an aggressive stance, he’ll offer the world Crimean independence or ‘full autonomy from Ukraine,’ rather than its integration into Russia.”

Brzezinski disagreed in part: “I think he’s seeking the complete annexation of Crimea – hence the referendum on March 16, hence the Russian parliament’s moves to accelerate the accession of external territories – everything points toward that end.  The real question is what more will he grab? … Just this weekend, [Russian Foreign Minister Sergei] Lavrov tweeted that the instability in Ukraine jeopardized the regions in Russia along the Ukrainian frontier. This creates the impression that Russia could threaten more Ukrainian territory. While the clear goal is Crimea, Putin is an opportunist and we have to keep that in mind and act accordingly.”

James Rupert is managing editor at the Atlantic Council.