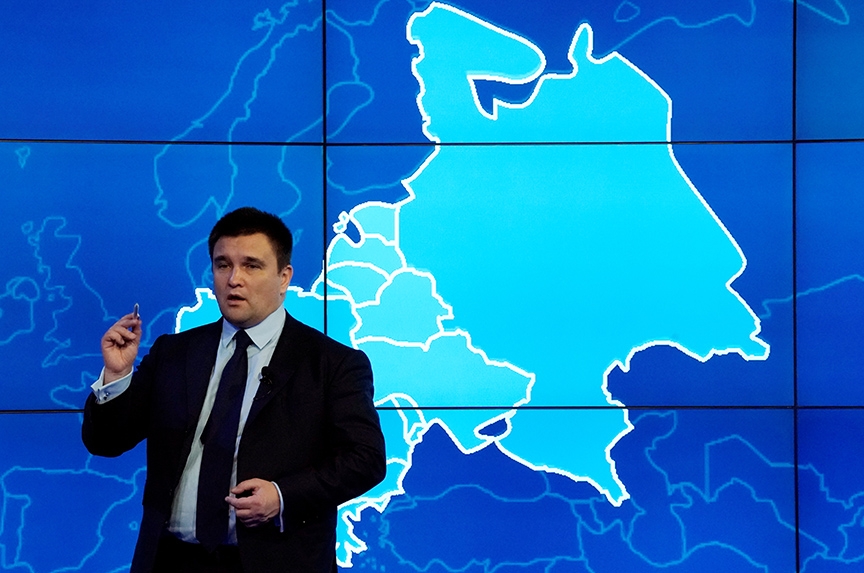 Klimkin made his usual appeal to his European counterparts for more help for Ukraine, but also asked them to do more to protect themselves from a Kremlin he says has no limits after Vladimir Putin’s effortless reinstallation as president on March 18.

Europe is rattled by the attempted murder of former Russian spy Sergei Skripal and his daughter in Salisbury, England, and Klimkin said it should be. Blaming the incident on Moscow, he said the increased Kremlin threat “involves the whole international community.” Speaking in an exclusive interview following his meeting with NATO Secretary General Jens Stoltenberg, Klimkin described how, “five years ago, many people did not believe Putin could ever invade Ukraine. One year ago, many people did not believe at all that [Russia] could organize, using nerve agents, on British soil.”

“Fundamentally,” said Klimkin, “there are no red lines here.”

According to Klimkin, Putin was “raising the stakes intentionally” by using “nerve agents on British soil, endangering British citizens, and doing it… just one week before the presidential elections in Russia.”

In the wake of this attack, the European Union must rally a “comprehensive and coordinated” response to the assault on its territory, using every tool in its arsenal, said Klimkin. “There could be more political pressure. There could be attempts to counter Russian unconventional threats,” he suggested, adding that retaliatory measures could take an asymmetrical approach, focusing on energy, cyber, or any range of issues.

In particular, Klimkin advocated for a boycott of the FIFA World Cup in June. “How can you say that Russia deserves [to host] such a football championship after what has happened,” namely, “so many cases of meddling into elections in Europe and all around the democratic world?” he asked.

Klimkin would also like to see Europe curb its own high-flyers who serve Moscow’s purposes abroad. In the spotlight: former German Chancellor Gerhard Schröder.

Schröder is chairman of the board of supervisors of Russia’s state-owned oil company Rosneft. He is also a vocal supporter of the controversial Nord Stream 2 gas pipeline, a sub-sea gas pipeline transporting energy supplies directly from Russia to Germany, cutting out Ukraine.

Klimkin suggested the EU look into whether sanctions such as those imposed on some Putin associates could also apply to Schröder. “It’s very important… that the EU—both nationally and at the EU level—should act against such persons,” Klimkin said. “They keep driving projects, Russian projects, which are supported by Russian companies, which are under EU sanctions, and which are used now as a tool [for] Russian meddling in the European Union.”  His view has been supported by other German politicians—members of the European Parliament Elmar Brok and David McAllister—but rejected by Chancellor Angela Merkel.

Klimkin warned that allowing these “Putin lobbyists” free rein is a danger to Europe itself.

“Tolerating that would mean Putin could do something else any other day,” he said. Klimkin cautioned: “Remember what has been tested in Ukraine—Russian propaganda, [the] May 17 invasion [of Crimea], cyber [attacks], terrorist attacks, everything” could all be used in other European countries. He said the same type of propaganda and fake news seen in the Crimea invasion and annexation are being employed to amplify Russia’s denial of its role in the attack. “Everyone should be acutely aware of it,” said Klimkin.

Klimkin said his meeting with EU foreign ministers on March 19 had a different air about it that felt more critical toward the Kremlin, a tone he attributes to the Salisbury attack. At NATO, the message was the same, that the nerve-agent attack was not an isolated incident but part of a pattern of Russian aggression ranging from election meddling to the Skripal incident.

Klimkin acknowledged that this nearly amounts to a zero-sum game between Moscow and Kyiv. “Unfortunately,” he said, “some people need time to understand what Russia is about… what this Kremlin regime is about.” But after Salisbury, Klimkin said, “it’s coming, it’s coming, definitely…this sense of clear understanding [of] what Russia is able to deliver.”