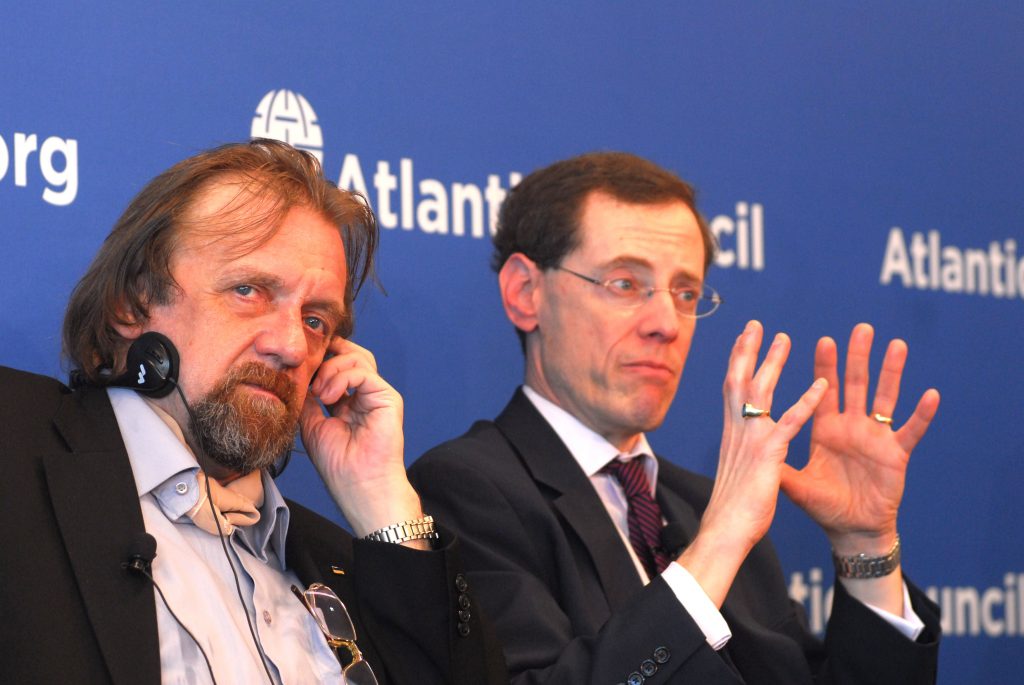 The apparent US indifference toward the annexation of Ukraine’s Crimean Peninsula in February 2014 amounts to giving Russian President Vladimir Putin a green light to commit similar acts of aggression against other countries, panelists warned during a March 6 conference at the Atlantic Council.

“The Obama administration refuses to call what Putin is doing an invasion. They use the word incursion,” said John E. Herbst, Director of the Atlantic Council’s Dinu Patriciu Eurasia Center.

Herbst, who served as the US Ambassador to Ukraine from 2003 to 2006, criticized current White House policy for focusing too much on the fight against the Islamic State in Iraq and al-Sham (ISIS), the terrorist group that controls large swathes of territory in Iraq and Syria, at the expense of the worsening crisis in Eastern Europe.

“The greatest security challenge on the planet today is not that ragtag bunch of terrorists, ISIS, but the Kremlin,” he said. “Mr. Putin’s ardent wish is for the world to forget about the Crimean Peninsula.”

David Kramer, Senior Director for Human Rights and Human Freedom at the McCain Institute for International Leadership, referring to Russia’s actions in Ukraine, said Putin has followed a similar playbook before.

“Putin has been using it in Moldova, in Georgia, and in [Georgia’s breakaway regions of] South Ossetia and Abkhazia,” Kramer said. “This is not new, it’s just more brazen than before. The civilized world must make a bold step and speak the truth, lest it encourage Putin and others like him.”

Kramer said that for now, the West must maintain its economic sanctions against Russia.

“In my view, it would be a mistake to lift them as long as Russia controls any part of Ukrainian territory,” he said. “If we don’t recognize the annexation, then we should keep the sanctions in place until Russia gets out of Crimea.”

The Obama administration does not recognize Russia’s annexation of Crimea, which led to sanctions against Russian officials by the United States and the 28-member European Union.

“Europe is the epicenter of the most established norms of freedom and security. The brazen seizure of territory—and its implications for political freedom—are crucial. If we cannot get it right in Europe, how can we hope to get it right globally?” he said.

With the panel discussion, the Atlantic Council and Freedom House released a report—“Human Rights Abuses in Russian-Occupied Crimea”—prepared by Andrii Klymenko, a longtime journalist in Crimea who now is based in Kyiv. Klymenko is Chief Editor of an independent news website, Black Sea News, and serves on the board of the Maidan of Foreign Affairs, a Kyiv-based foundation that advocates policies to protect Ukraine’s independence.

Klymenko described how Crimean authorities, with the help of so-called “self-defense units” and a slick propaganda machine aimed at deceiving the West, have systematically enacted laws to repress the peninsula’s 2.4 million inhabitants—especially those who have spoken out against Russia.

“Since the first days of the Crimea occupation on February 27, 2014, when our administration buildings in the capital were seized, Putin’s Russia has used all means at its disposal to violate not only international law, but also the Russian legal system,” Klymenko said through an interpreter.

“There’s a big illusion that everyone in Crimea supports being part of Russia,” said Klymenko. But according to Crimean Tatar leaders and various media outlets abroad, that support stands at 34 percent—not the 83 percent claimed by official Russian sources.

On March 18, 2014, all Ukrainian citizens residing in Crimea were automatically declared citizens of Russia. Those hoping to keep their Ukrainian passports were given only a month to inform Russian occupation authorities. As a result, Klymenko said, about 40,000 people left Crimea.

“If I’m arrested in Moscow, I wouldn’t be able to call the Ukrainian Consulate, because they now see me as a citizen of Russia,” he complained. “Today, we have five activists who were taken out of Ukraine and sent to prisons in Russia. Ukrainian diplomats are not allowed to see them because they’re considered Russian citizens.”

Even worse, those who rejected Russian citizenship are required to obtain a residence permit, but the issuance of such permits has been limited to just 5,000 a year.

“Those without it can’t buy a SIM card for their mobile phones. They can’t find jobs, can’t get medical treatment and can’t study. They can’t do anything,” said Klymenko.

“Russia has also passed a law against hiding a second citizenship. So if someone has two passports and didn’t tell the authorities, he’ll be fined,” he said. “Under a new law that takes effect in 2016, there will be no possibility of having dual nationality, so such people will have to give up their Ukrainian passports.”

Kidnappings, beatings, and house-to-house searches have also proliferated in Russian-occupied Crimea, said Klymenko, and critics of the occupation are being silenced. Local mobile phone operators have been liquidated, making only international roaming possible; at the same time, Internet bloggers must now keep a history of websites they visit, and are required to give this information to police upon demand.

“Under a law adopted May 9 of last year, if I say publicly that Russia is occupying Crimea, I can get up to three years in prison,” Klymenko said. “If I say that on the air or in a blog and I have more than 3,000 subscribers, I can get up to five years.”

In the face of such repression, Klymenko and his editorial staff were left with no other option but to leave Crimea.

Lagon said this is all part of Moscow’s campaign “to infuse the entire region” with pro-Russian propaganda regarding current events in Ukraine.

“It’s possible to make outrageous claims about what people think in Crimea if you control the information environment,” he said. “Russia has placed very harsh limitations on the media, and we are quite concerned about the implications elsewhere. It’s important that we not let what’s happening in Crimea stand.”