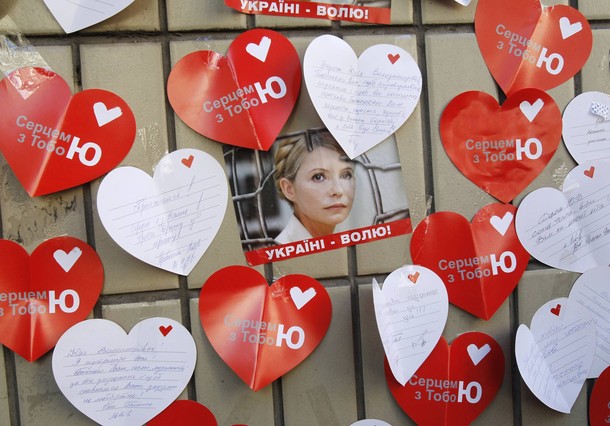 The incarceration of Yulia Tymoshenko has temporarily halted and may permanently terminate Ukraine’s integration with Europe.
Until the arrest and imprisonment of Tymoshenko in August and October respectively, the EU had planned to initial its Association Agreement with Ukraine (which includes a Deep and Comprehensive Free Trade Agreement [DCFTA]) at the December 19 summit in Kyiv. Following its translation into EU languages and other technical procedures, the agreement was expected to be officially signed by the European Council (EC) in mid 2012.

The final stage would normally consist of the EU recommending its ratification by the European Parliament and the 27 parliaments of the EU member. This stage was always unlikely because of the influence of the center-right European Peoples Party (EPP), which includes Tymoshenko’s party, Batkivshchina [Fatherland]. The EPP is the largest political group in the European Parliament and also currently holds power in the majority of EU capitals. The EPP’s allies on the right (Conservatives and Nationalists), center (Liberals), and the left (Greens) have supported its tough positions condemning democratic regression in Ukraine. The Socialist group, which has worked with the Party of Regions, has sought to moderate their tough position in the European Parliament.

This month, as the summit approaches, the prospects for initialing and signing the Association Agreement appear increasingly unlikely due to President Yanukovych’s unwillingness to take steps to meet EU and US demands for Tymoshenko’s release and pardon. This impasse has already had a negative impact on relations between Ukraine and the EU. For example, after Tymoshenko was sentenced, the EU cancelled Yanukovych’s planned October 20 visit to Brussels.

The sticking point is the EU and US demand for Tymoshenko to be permitted to participate in political life and stand in elections. Her sentence of seven years in prison and a three year ban from official positions removes her from the next three parliamentary (2012, 2016, 2020) and two presidential (2015, 2020) elections, giving Yanukovych and the Party of Regions a likely monopoly of power through the rest of this decade.

As I have written in the Eurasia Daily Monitor, Yanukovych does not want to see Tymoshenko elected to Parliament in October 2012. As Ukraine’s most polished opposition leader, Tymoshenko would undermine Yanukovych’s plans for re-election in the January 2015 elections (he surely remembers having only defeated her by a mere 3% in 2010).

The November 24 EU-Ukrainian parliamentary cooperation meeting confirmed that there will not be an initialing of the Association Agreement at the December EU-Ukraine summit. EU and Ukrainian officials blamed this on ”technical questions” which seems more a diplomatic excuse than a political reality. Negotiations were completed by mid October and follow-up “technical questions” should take 4-6 weeks.

What has damaged relations further since Tymoshenko’s sentencing has been Yanukovych’s unwillingness to heed Western criticism and blatant deception of President Yanukovych and Foreign Minister Kostyantyn Hryshchenko. It has therefore been surprising how the US Embassy in Kyiv and former Ambassadors to Ukraine in Washington have continued to believe until recently that the Yanukovych administration was “listening” to Western criticism.

In fact, Yanukovych and Hryshchenko have already deceived EU leaders on three occasions and following each incident, stepped up criminal charges against Tymoshenko.  Yanukovych gave verbal promises to EU leaders in September at the Yalta European Strategy and Warsaw Eastern Partnership summits, and during private diplomatic conversations since then. Furthermore, Yanukovych and Hryshchenko have both told EU leaders that a compromise would be reached through de-criminalization of the 1962 article used to sentence Tymoshenko, which remains in Ukraine’s criminal code adopted a decade ago.

In light of developments in the last four months since Tymoshenko’s imprisonment, it should now be difficult to find any leader in the EU and US who believes Yanukovych is committed to European democratic values.

The latest act in Ukraine’s Shakespearean drama was the report that Yanukovych plans to not attend the EU-Ukraine summit and instead participate in the Eurasian Economic Council meeting in Moscow being held on the same day (December 19). Borys Tarasiuk, head of the parliamentary committee on European integration, told Ukraine’s Channel 5 news that “The current authorities have disastrously failed in their relations with the European Union.” Tarasiuk warned “either the Ukrainian authorities change their policies or they can forget about European integration.”

After four years of tough negotiations, Kyiv and Brussels came close to a breakthrough in the first Association Agreement and DCFTA for the Eastern Partnership that was unveiled in 2009 by the EU. The negotiations have now reached a dead end and the focus of the EU Eastern Partnership will shift to Georgia and Moldova who launched negotiations for Association Agreements and DCFTA’s with Brussels considerably later than Ukraine. Both countries have made more progress in their reforms than Ukraine.

Yanukovych’s desire for revenge, the neutralization of his main opponent, and to remain in power have proven to be more important than setting Ukraine on a path of European integration. It is incomprehensible that Yanukovych and Hryshchenko believed Ukraine was so geopolitically important they could hoodwink Brussels in building a ‘Ukrainian Putinism’ at home while pretending to uphold European values abroad.

Unfortunately, Ukraine’s political leaders and oligarchs seem to have the last laugh. While their actions block a European future for Ukrainian citizens; the Ukrainian president, oligarchs, and ruling elites can continue to travel to their second homes in London, Monaco, Nice, and Vienna. In addition, capital also continues to flow illegally to offshore zones like EU member Cyprus, which is Ukraine’s largest source of foreign direct investment.

Until Ukraine’s elites are also unable to experience a European perspective, as they have prevented their citizens from feeling, they will never pressure Yanukovych to reverse his undemocratic policies. The EU and US have a greater ability to influence Ukraine’s policies than the policies of Belarus, which is already on a visa denial list and under sanctions from the West. Unlike Ukraine, Belarus has no oligarchs and its elites do not buy second homes in western Europe.

Brussels and Washington have yet to acknowledge this leverage over Ukraine’s elite and its value as a policy option to influence the case of Tymoshenko.