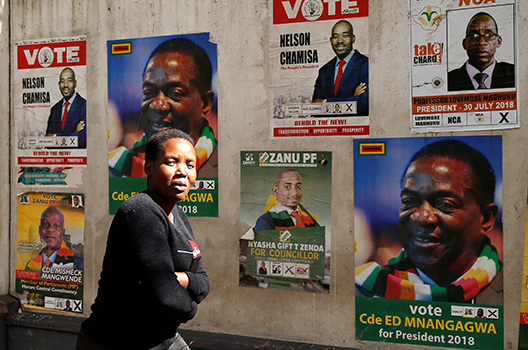 Police stand guard during a raid on the headquarters of the opposition Movement for Democratic Change (MDC) a day after post-election clashes between security forces and opposition protesters in Harare, Zimbabwe, August 2, 2018. (REUTERS/Mike Hutchings)

After days of uncertainty, protests, and violence following Zimbabwe’s July 30 presidential and parliamentary elections, “everyone has got to take deep breath,” Dr. J Peter Pham, the Atlantic Council’s Vice President for Research and Regional Initiatives and the Director of the Council’s Africa Center said.

In the early hours of August 3, the Zimbabwe Electoral Commission announced that current president Emmerson Mnangagwa won the election with 50.8% of the vote, avoiding a potential run-off. The election was the first one not featuring former president Robert Mugabe in more than four decades.

Mnangagwa’s party, the Zimbabwe African People’s Union – Patriotic Front (Zanu-PF) also won more than two-thirds of the seats in the country’s parliament. Mnangagwa was a long time political ally of former President Mugabe, but was part of the effort to oust him last November and then took over as interim president.

Mnangagwa’s primary challenger, Nelson Chamisa of the Movement for Democratic Change (MDC) Alliance has refused to acknowledge the result of the presidential contest and his party allies have alleged that they cannot verify the accuracy of the announced totals. Zimbabwe’s capital of Harare was rocked by protests and street action from Chamisa’s supporters, and police and military reaction resulted in the death of at least six people.

Dr. J Peter Pham discussed the election results and the unrest in Zimbabwe in an interview with the New Atlanticist’s David Wemer. Here are excerpts from the interview.

Q: President Mnangagwa was able to successfully avoid a run-off in the presidential election. Was this expected?

Pham: There was always a question of whether he would avoid the run-off, and what the effect of the almost two dozen candidates running in the race would be. I don’t think anyone had any doubts – except perhaps Nelson Chamisa – that Emmerson Mnangagwa would come out on top of the poll. In addition to the advantages of incumbency – never to be underestimated, especially in Africa – Mnangagwa benefited from Zanu-PF’s long-established patronage networks which were mobilized for the campaign as well as its consistent base among rural people who make up two-thirds of the population. The opposition MDC Alliance’s best chance in this election  was if the incumbent failed to clear the 50 percent threshold, thus triggering  a run-off in which  everyone would then unite against the candidate of Zanu-PF, the ruling party for the last almost four decades. But that didn’t come to pass according to the  announced results. There is no need for run-off because,  if the numbers given by the Zimbabwe Electoral Commission are to be believed, there is a fairly wide margin – more than 300,000 votes –  separating President Mnangagwa and the closest challenger, Mr. Chamisa.

Q: The four-day delay by the Electoral Commission in announcing results has raised questions about the election’s legitimacy. Was this a fair election?

Pham: The delay, and certainly the lack of any consistent and credible explanation for it, fed all sorts of speculation  among opposition supporters on what might be happening – and this was quite understandable given the already-high level of mistrust in the system after decades of authoritarian rule under former president Robert Mugabe. Although this was probably the most open election Zimbabwe has seen in decades, the state media – which is about the only media left in Zimbabwe after years of repression as well as economic stagnation – covered Mr. Mnangagwa overwhelmingly, leaving at best 10 percent of its coverage to his challengers. So there was an imbalance in media coverage and arguably an imbalance in resources available to conduct campaigns.  So one could argue that while perhaps procedurally the conduct of the poll was more open than it has been in a long time in Zimbabwe, there were some structural issues that certainly were to the advantage of the incumbent and the disadvantage of the twenty-two challengers vying to unseat him. That being said, however, one has to also acknowledge, the opposition did not help itself by splintering.

Q: Why did the opposition splinter? What effect did this have on the results?

Pham: Nelson Chamisa jumped over several people who were more senior to him within the MDC to take over the leadership of the party after the death of longtime leader Morgan Tsvangirai. That – and the fact that he was maneuvering for the position while Mr. Tsvangirai was battling the colorectal cancer that he eventually succumbed to earlier this year – didn’t sit well with a number of longtime party leaders, including Dr. Thokozani Khupe who was the vice president of the party and a former deputy prime minister [during the 2009-2013 Zanu-PF and MDC unity government]. She ran on her own ticket as the “MDC-T” party – the T stood for “Tsvangirai” – and that siphoned off votes from Chamisa in a number of constituencies.

Q: Reports say at least six people have died during clashes between police and opposition supporters. What caused these oppositon demonstrations to turn violent?

Pham: The loss of life, the injury, the harshness with which the protestors were dealt with by not only the police but also the military, is very serious and raises some really worrisome indicators. It certainly doesn’t project the image President Mnangagwa wants as he tries to lead Zimbabwe into a new chapter. Certainly the government must be held responsible for failing to restrain its forces. On the other hand, I think the opposition was behaving irresponsibly as well. One day after the election – even before the election commission had an opportunity to begin tabulating the results – Nelson Chamisa was already declaring himself the winner of the election. That got his supporters excited and out into the streets celebrating and [then] when there was a delay in announcing the results, these people became convinced that the election was being stolen. There may or may not have been legitimate reasons for this delay, but the electoral commission didn’t explain it well enough, so it left people to fear the worst.

The opposition [then] had people not only protesting, but by most accounts from independent observers, it was the opposition mobs that turned violent first,  throwing rocks and other objects at the headquarters of the Zanu-PF in Harare. Now, the [police and military] response may have been disproportionate, but it was the protestors who started it by stoning the building while their political opponents were inside. So in many respects I think the opposition leadership has more than a bit of responsibility for inciting people and must bear at least part of the onus the resulting consequences.

Q: What role did Nelson Chamisa play in the opposition’s defeat?

Pham: Nelson Chamisa is a very complex character. His calling of voters into the streets, and proclaiming himself the winner when all ballots hadn’t even been counted yet, much less tabulated – that was just the latest of his many very eccentric statements during the course of this campaign. In January, he made an outlandish claim that he had met with President Trump and that the United States was prepared to invest $15 billion in Zimbabwe if [Chamisa] was elected president. The US embassy had to come out with a clarification that Chamisa had never met President Trump and there was no US investment commitment.

During the campaign he also got into a social media tussle with Rwanda’s President Paul Kagame, who is the current chairman of the African Union. Mr. Chamisa claimed that when he was minister of technology in the unity government, he gave Mr. Kagame the idea of a digital economy, which the Rwandan president has implemented with some success in his country. That was hyperbolic to put it mildly. Some of his campaign promises were also clearly over the top. He promised that if he were elected the Olympics would come to Zimbabwe and that he was going to build a bullet train across the country. Of course, one might expect such a sense of personal grandeur from someone who uses the hashtag #Godisinit for his political campaign.

If President Mnangagwa has a checkered past, Chamisa had his own faults as well and these didn’t help in this election.

Q: Before this election, many observers thought this election would provide an opportunity for Zimbabwe to rejoin the international community after years of isolation. Will the protests and violence put this in jeopardy?

Pham: Everyone has got to take a deep breath after all of this. The Election Commission has announced results and people need to check the results against observer tallies. This is of course the first election in years that Zimbabwe has not only allowed but invited international observers, from the Commonwealth, the United States, the European Union, and the African Union, among other delegations. The observers will need to compare their notes of what they saw with the published tallies, which I urge the Zimbabwe Electoral Commission to publish as soon as possible. A lot will depend on that process of review and how President Mnangagwa deals with what I would call the provocations in the coming days from the protestors and others. It will also depend on a bit of statesman-like behavior, or lack there of, on the part of the opposition.

Q: What will President Mnangagwa need to focus on first as he begins his next term?

Pham: He first and foremost must in the time between now and his inauguration – the date of which is not set – act like the president of the entire country, and try his best to heal some of the rifts that have opened up and, both literally and figuratively, put out some of the fires that have been stoked in recent days. On the other hand he has to avoid the temptation of – and the international community should avoid the silliness of insisting on – a unity government. The fact is that unity governments – the co-habitation of winner and loser – have not delivered very good results, as evidenced not only with Zimbabwe’s prior attempt at it as well as the experience of other places like Kenya. So-called unity governments may buy a little time and lower the political temperature temporarily by distributing spoils, but they also incentivize people to behave badly when they lose. They may think by shouting the loudest, threatening the most,  they can get through third-party mediation  what they didn’t get at the ballot box.

Also for Mr. Mnangagwa, it is incumbent on him to really show in more than just words that he is no longer Mugabe’s right hand man. This is someone who stood by Mugabe’s side for decades and in fact is still under US sanctions for his role in cracking down on the opposition in the early 2000s quite brutally, by commanding mobs that beat up on opposition supporters and intimidated voters. There must be a clear break with that past, not a slow return to it.