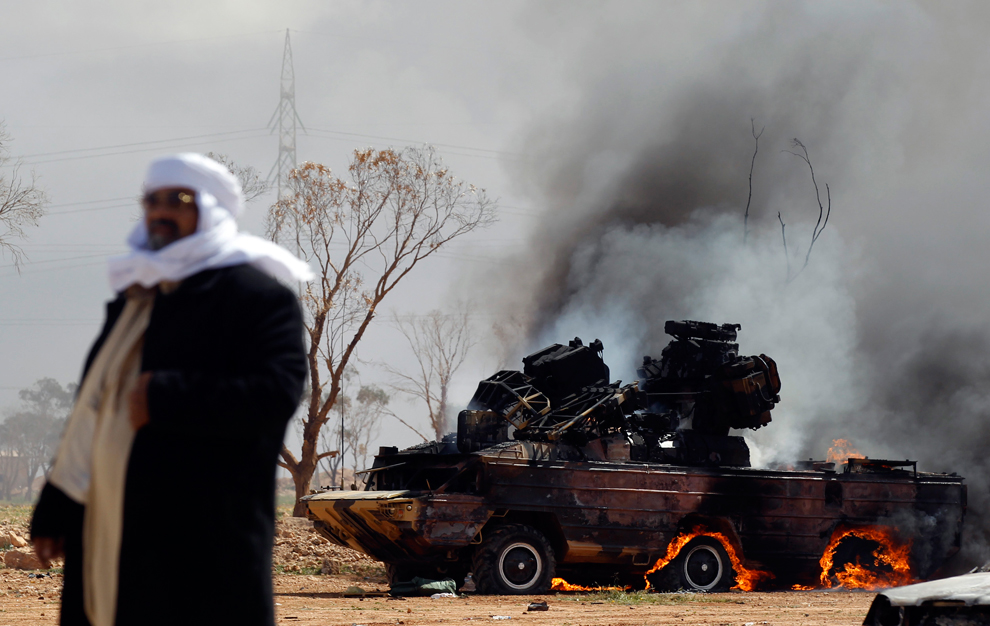 During even the most frightening moments of the Cold War, the threat of nuclear Armageddon provided the interesting consequence of preventing war between East and West. One metaphor describing this standoff was two scorpions in a bottle stinging each other to death. Fortunately, one of the scorpions had a fatal DNA strain that caused its self-destruction. Unfortunately, identifying similar strains among the many crises of today and those arising tomorrow is more difficult.

In Libya, the largely predictable consequence of international military action to prevent Moammar Gadhafi from wholesale murder of civilians is a likely stalemate with him remaining in power. As Geoffrey Kemp of the Center for the National Interest recently pointed out, Tehran and Pyongyang have taken careful note of what happens when an otherwise weak state gives up its nuclear option, a consequence that surely couldn’t have been intended by the decision to establish the no-fly zone.

In Egypt, as that country lurches toward an uncertain future, helping the rise of Islamist parties wasn’t intended by U.S. pressure on President Hosni Mubarak to stand down.

Islamist doesn’t mean radical as in the extreme perversions of Islam. However, the next Egyptian government is likely to re-examine the peace treaty with Israel and could possibly decide it was time to reassess or revoke parts of it. The regional and geostrategic consequences of such a step, if it occurs, will be profound.

In Yemen, the battle apparently has become a blood feud between President Ali Abdullah Saleh and his former closest ally Maj. Gen. Ali Mohsin al Ahmar over who rules. The West needs Saleh in the fight against al-Qaida. Ahmar appears to be better disposed toward the fundamentalists although no one can be certain. Supporting Saleh especially as violence provokes civil war is distasteful at best. But Ahmar replacing Saleh could give al-Qaida a boost — inadvertent consequences of the first magnitude.

Arnaud de Borchgrave, United Press International editor at large and a senior adviser at the Center for Strategic and International Studies, supports the Kemp thesis on the consequences of Gadhafi foregoing his bomb and reports that Saudi Arabia is already seriously considering a nuclear option vis-a-vis Iran.

Whether intended or not, the last thing needed is a nuclear arms race in that or any other part of the world with the likelihood of the most unintended consequences imaginable. And, of course other oil-rich states in the Persian Gulf could follow suit.

In Afghanistan U.S. Army Gen. David Petraeus is modestly bullish on the progress of military operations while continuing to caution that the situation is “fragile and reversible.” Opinion polls in Afghanistan reinforce this optimism with four of five Afghans favorably supporting President Hamid Karzai and a majority describing life as getting better.

In Pakistan, U.S.-Pakistani relations will take a long time to recover from the release of CIA contractor Raymond Davis. Largely unreported, Pakistan recently expelled some 330 U.S. “diplomats” — read CIA — and is preparing to expel more.

Pakistani Army Chief General A.P. Kayani publicly chastised the United States for a Predator strike that killed 40 Pakistanis. The U.S. version was that these were Taliban hiding in the open to disguise their meeting. Pakistan rejected that interpretation.

Worse, Kayani has privately warned the United States that if another mistaken attack happens again, the consequences will be serious.

These and other major problems won’t disappear as did the Soviet Union. Worse, unlike World War II or the Cold War, no single threat or danger will coalesce into a single strategy or policy for success. The times are untidy — a euphemism for complex, complicated and dangerous.

Three actions are critical. First, a strategic approach that integrates these diverse challenges to find interconnections and pressure points and achievable and well-stated aims and objectives is imperative. This is called strategic thinking. Second, integrated planning not merely across regions and related issues such as energy, instability and extremism but across government is essential. Third, the president must exercise strong leadership to accomplish both.

This White House, as others, will assert this is being done. If it is, it is well-disguised and isn’t working — the worst of all unintended consequences.

Harlan Ullman is Senior Advisor at the Atlantic Council, Chairman of the Killowen Group that advises leaders of government and business, and a frequent advisor to NATO. This article was syndicated by UPI. Image credit: Reuters.