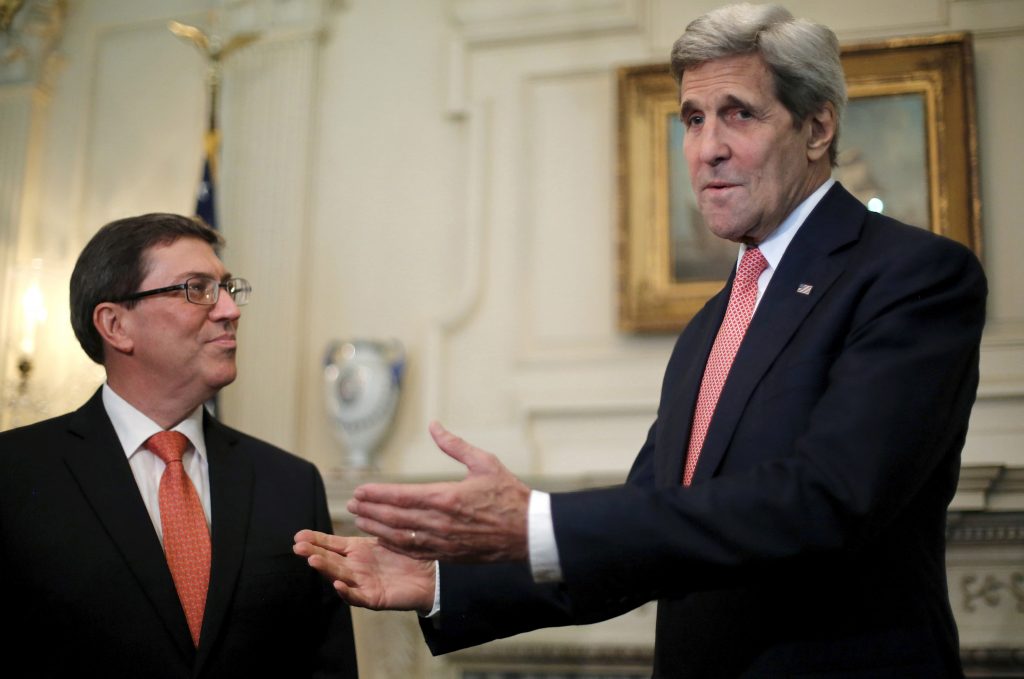 US Secretary of State John Kerry (right) welcomes Cuba's Foreign Minister Bruno Eduardo Rodriguez Parilla to his office at the State Department in Washington July 20. The Cuban flag was raised over Havana's embassy in Washington July 20 for the first time in 54 years as the United States and Cuba formally restored relations, opening a new chapter of engagement between the former Cold War foes. (Reuters/Jonathan Ernst)

The United States and Cuba reopened embassies in each other’s capitals July 20 taking the biggest step toward ending half a century of animosity between the two countries.

US Secretary of State John F. Kerry hosted Cuban Foreign Minister Bruno Rodriguez at the State Department in Washington following a ceremony to mark the transformation of the Cuban Interests Section in Washington to a full Cuban Embassy.

Kerry will ceremonially raise the US flag at the US Embassy in Havana on August 14, but the embassy began functioning legally July 20.

US President Barack Obama’s decision in June to take Cuba off the State Department’s list of state sponsors of terrorism cleared the path for the restoration of diplomatic ties.

On July 1, Obama announced his decision to reopen the US Embassy in Havana.

Peter Schechter and Jason Marczak, Director and Deputy Director, respectively, of the Atlantic Council’s Adrienne Arsht Latin America Center, and Rachel DeLevie-Orey, an Assistant Director in the center, discuss the significance of this moment in an interview with the New Atlanticist’s Ashish Kumar Sen. Here are excerpts from our interview.

Q: What are the practical implications of the reopening of the embassies in Washington and Havana? What can both countries now do that they couldn’t when they had Interests Sections in each other’s capitals?

DeLevie-Orey: They can host missions, specifically trade missions, which is something that an Interests Section cannot do. This will be very interesting as the United States considers opening up trade with Cuba.

On a practical level, given that we still have a sanctions regime, we still have Helms-Burton, we still have prohibitions on financial exchanges, there isn’t going to be a massive difference that comes from opening up an embassy. But on a philosophical, historical, and political level it is an incredible change.

Schechter: There used to be exchanges of coast guard, discussions about environmental issues, conservation of coral reefs, exchange of government officials to discuss what would happen in the case of oil spills. These used to be majestic moves between governments that had never spoken to each other. Now this is going to be just regular stuff. We will have meetings between the Cuban Minister of Transportation with our Department of Transportation on ferries, airlines, charter services and they’re going to meet openly and not in third countries.

The whole flora and fauna of meetings that used to be so dramatic because there would be only one every so often is now going to happen every day of every week in a very normal fashion.

Marczak: Going back to the philosophical level, the scarlet letter will be removed from the business cards and affiliations of Cuban diplomats in the United States. Among embassies in Washington there has been a constant apprehension about “Do we include the Cubans or not include in the Cubans in various discussions?”

The Cubans are not part of the OAS [Organization of American States], the IDB [Inter-American Development Bank], or the World Bank. We think it is critically important for Cuba to be part of these institutions, but in the absence of that this development puts Cuban diplomats on a similar level as diplomats from any other country.

Q: Some congressional critics have threatened to block funding for the embassy and obstruct the appointment of a US Ambassador. Can they succeed?

DeLevie-Orey: If they succeed in blocking an Ambassador, Obama can do a recess appointment, and he should.

As for funding, the embassy’s operations actually have funding through 2016 so we’re talking two years from now. Considering how much has changed in the political climate in Cuba in the last six months, I think what happens in 2016 will be anyone’s guess.

But that also means we will have eighteen months of a functioning embassy to prove the value of a functioning embassy, to prove that opening an embassy in Havana hasn’t resulted in  the destruction of human kind that many opponents preach. We are just not going to see [the funding] blocked because there is not going to be enough political strength to back up defunding an embassy.

Marczak: Congress blocking embassy funding would go completely against the tide of the American people. As we showed in our poll last year and in many polls since then have shown, restoring diplomatic relations is clearly a position supported by the American people. Also what we have seen in Congress is that the Cuba discussions are less and less dominated by the hardliners who are increasingly marginalized.

If we don’t have an Ambassador the President should make a recess appointment. But we also have many embassies around the world that function rather well without an ambassador, including our embassy in Peru that went without an Ambassador for a whole year.

Defunding the US Embassy in Cuba would actually hurt the American people. One of the main things an embassy does is it provides consular services to its own people traveling in that country. By taking away funding from a US Embassy we are taking away its ability to provide services to the increasing number of Americans who are traveling to Cuba.

Q: Now that diplomatic relations have been restored what are the issues the Obama and Castro administrations want to address next in order of priority? You’ve got the embargo, the status of Guantanamo Bay…

And there is the issue of human rights that continues to be highly problematic in Cuba. Cuba aspires to be like Vietnam with a very closed political system and a very open economy. But Cuba is a Latin American nation geographically and mentally in the West. Cubans are not going to be satisfied with an economic opening alone.

Marczak: Some issues are US issues and some are Cuban issues. Investment, trade, and nationalized property are all joint issues. But things like human rights are not something the Cubans wants to talk about. It is critical for our agenda. The overall rapprochement with Cuba is a means to be able to open more opportunities for the Cuban people.

There are also issues for the Cubans, too. The Cubans are going to want to have the future of Guantanamo be on their agenda.

Like any negotiation, this is a slow process. We have to prioritize issues of mutual interest but at the same time making sure that our individual interests as a country do not get lost. While we talk about trade and investment we have to always be doing this in the context of what will help Cuban people.

DeLevie-Orey: After the December 17 announcement [by President Obama], a lot of people said the President has done everything he can and now it is up to Congress. When it comes to banner headline news that is true, but there are still things that the President can do to progress this relationship. Those should be prioritized because they can, for obvious reasons, move through more swiftly. So that’s appointing an Ambassador, making it easier for the international financial institutions to begin talking to Cuba.

There is a lot of [US] legislation that prevents the US representation in these institutions from voting in favor of assistance to Cuba. There is also language that instructs the withdrawal of US funds [from these institutions]. But there are ways to work around this. President Obama should make clear that these institutions are welcome to engage with Cuba because they are rightfully terrified right now.

Q: A Cuban foreign ministry official was recently quoted as saying the Castro government believes the US is still interested in regime change in Cuba. He cited the State Department’s democracy program to substantiate his claim. Should the Obama administration consider amending this program?

Schechter: Both countries need to change the chip of fifty years of accusations. The United States had a wrong-headed and incorrect policy in place for five decades.  But it is now changed. President Obama’s normalization and reopening of embassies means that our Ambassador will soon present credentials to the Cuban President. That is as explicit a recognition of the regime as I can possibly imagine.

To me, the policy of regime change is over, but that doesn’t mean that Cuba isn’t a country that would benefit from learning more about how to have a more open civil society, how to move towards greater press freedoms, how to open up democracy, how to improve local government so that it is more responsive to the needs of neighborhoods as opposed to the needs of the party.

DeLevie-Orey: We have programs to support democracy in countries around the world, which are not democracies…

Schechter: And with whom we have excellent relations. For better or worse a country’s democratic credentials, except for Cuba, have not until now been a definition of whether we have good relations with that country or not.