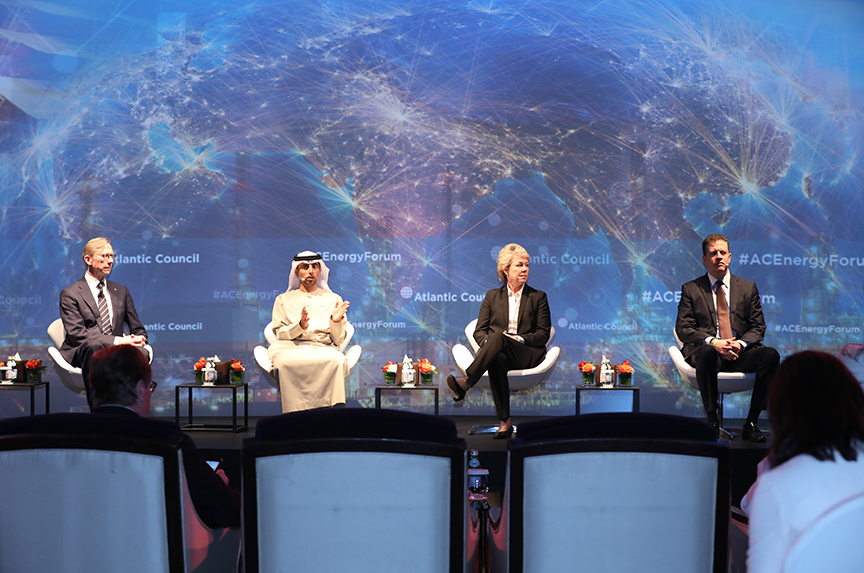 The United States is determined to drive Iran’s oil exports down to zero in its effort to maximize economic pressure and force Tehran back to the negotiating table to discuss a “comprehensive deal” in place of the nuclear agreement US President Donald J. Trump abandoned last year, Brian Hook, the US special representative for Iran and senior policy advisor to US Secretary of State Mike Pompeo, said at the Atlantic Council’s 2019 Global Energy Forum in Abu Dhabi on January 12.

“We know historically that Iran does not come back to the negotiating table without pressure… so we are very focused on the energy side because that is where Iran’s economy is structured in a way where it is its greatest vulnerability,” Hook said.

US President Donald J. Trump pulled out of the Iran nuclear deal—formally known as the Joint Comprehensive Plan of Action (JCPOA)—on May 8, 2018. Hook said the Trump administration is seeking to get a “new and better deal with the Iranians… but it needs to be comprehensive, it needs to include all of the threats that Iran presents to regional peace and security, and the nuclear piece is the most significant.”

In November 2018, the United States reimposed sanctions on Iran, however, Trump’s decision to grant sanctions waivers to eight countries that are buying oil from Iran—China, India, South Korea, Japan, Italy, Greece, Taiwan, and Turkey—caught many by surprise.

Explaining the foreign policy behind those waivers, Hook said all of the exempted countries had demonstrated significant reductions in their purchases of Iranian crude and that made them eligible for exemptions.

Noting that 80 percent of Iran’s revenues come from oil exports, Hook said: “This is the world’s number one state sponsor of terrorism. If we want to deny this regime the money that it needs for its nuclear program, for its missile program, for its regional aggression, maritime aggression, cyber threats, human rights abuses, the whole list, we have to go after the money.”

“On the energy side, we have been very successful and there are going to be much deeper reductions of Iranian imports… Our goal is to get to zero as fast as possible,” he said.

Hook participated in a panel discussion on the topic “Setting the Energy Agenda for 2019.” He was joined in the discussion by the United Arab Emirates’ Minister of Energy and Industry Suhail Al Mazrouei, Crescent Petroleum Chief Executive Officer Majid Jafar, and Lisa Davis, CEO Energy and member of the Managing Board of Siemens AG. CNBC reporter and anchor Hadley Gamble moderated the discussion.

On January 10, Iranian Oil Minister Bijan Zanganeh said US sanctions against his country were “fully illegal.”

“We believe that we should not comply with the illegal sanctions against Iran,” Zanganeh told a joint news conference in Baghdad with his Iraqi counterpart, Thamer al-Ghadhban.

Iran has reportedly sought to evade sanctions. Late last year, about a dozen tankers believed to be carrying Iranian crude oil shut off their transponders, which track their movements via GPS.

Sanctions enforcement is a priority for Trump and Pompeo, Hook said. “The Iranian regime, which is an outlaw regime, certainly tries to evade sanctions.  We have, I think, organized the interagency in a way to make sanctions enforcement a big priority.  And we have had a fair amount of success with it,” he said.

“When the president and the secretary of state, secretary of the Treasury, secretary of defense make Iran the priority that it is, I think nations around the world understand that there is no benefit to them partnering with the Iranians to evade our sanctions. We will sanction any sanctionable activity and we have already demonstrated that,” Hook said. “We know how Iran evades sanctions, we know the general channels they do it and we are working very closely with our partners to try to close those loopholes.”

The ups and downs of the oil market

The big story of the past year has been the US shale revolution, which has turned the United States into the world’s largest producer of crude oil for the first time since 1973.

In 2018, oil prices rode a roller coaster in 2018. Starting the year off around $60 a barrel, oil prices rose to an October high of $74 a barrel and then plummeted to $44 a barrel toward the end of December.

In June 2018, the Organization of the Petroleum Exporting Countries (OPEC) reached an agreement to ramp up oil production in anticipation of a drop in Iranian production due to US sanctions and a dip in crude supplies from Venezuela. However, Trump’s decision to grant sanctions waivers to the eight countries that are buying oil from Iran, as well as China’s decision to halt oil imports from the United States in a tit-for-tat trade war, left the market facing a potential supply glut and caused oil prices to plummet.

Hook maintained: “We did not want to lift the price of oil, and we were successful doing that.”

When the United States pulled out of the Iran nuclear deal in May 2018, oil was trading at $74 a barrel and when US sanctions went back into effect and a million barrels of Iranian crude were taken off the market, oil was at $72 a barrel, said Hook. “So we had very carefully calibrated the balancing of our national security goals and our economic interests.  The president was very clear that he did not want to cause a spike in oil, and so we granted eight oil exceptions—significant reduction exceptions,” he explained.

In Vienna, Austria, in December 2018, a global coalition of oil producers known as OPEC plus, which includes members of OPEC and other producers, including Russia, agreed to cut production by 1.2 million barrels per day.

Global oil production has also slumped due to involuntary efforts—notably a drop in Iran’s oil exports as a consequence of reimposed US sanctions and the fact that Libya’s largest oilfield has been offline since it was stormed by armed protesters in December.

Gamble asked the panelists how they plan to tackle the known unknowns coming from the Trump administration in 2019.

Al Mazrouei said the United Arab Emirates “will continue doing what we have been doing successfully in the past three years, which is watching and trying to achieve the market balance, trying to ensure that we have enough oil, but not too much oil, in the market for the consumers.”

“We will not target, as we always say, a price,” he maintained. “We are targeting that balance wherever the price is going to be achieved by the market when we reach that balance.” He expressed confidence that this balance will be achieved in the first part of the year.

Jafar said he expects the volatility in the market to continue. In terms of challenges, he pointed to what he said was a “chronic underinvestment in conventional oil” and “the growth in demand for gas.” Al Mazrouei cited trade tensions between the United States and China, and concerns about a recession.

On the question of China, Atlantic Council President and Chief Executive Officer Frederick Kempe asked the panelists about the Asian superpower’s role.

Hook noted that China has significantly reduced its purchases of Iranian crude. “That’s a good thing,” he maintained.

Al Mazrouei described China as a strategic partner for the United Arab Emirates. “We are investing as well in China in different sectors, and especially in the technology sector we think China is going to take leaps in telecommunication, and we are trying to understand and be part of that success story,” he said.

“To us, our relationship with China is an opportunity, and it’s something that is going to benefit both us and them,” he added.

China takes “a long-term view,” said Jafar, adding, “there’s clearly a strategic driver for them to be active in this region and in energy in particular.”

Image: From left: Brian Hook, the US special representative for Iran and senior policy advisor to US Secretary of State Mike Pompeo; the United Arab Emirates’ Minister of Energy and Industry Suhail Al Mazrouei; Crescent Petroleum Chief Executive Officer Majid Jafar; and Lisa Davis, CEO Energy and member of the Managing Board of Siemens AG, participated in a panel discussion at the Atlantic Council’s 2019 Global Energy Forum in Abu Dhabi on January 12.