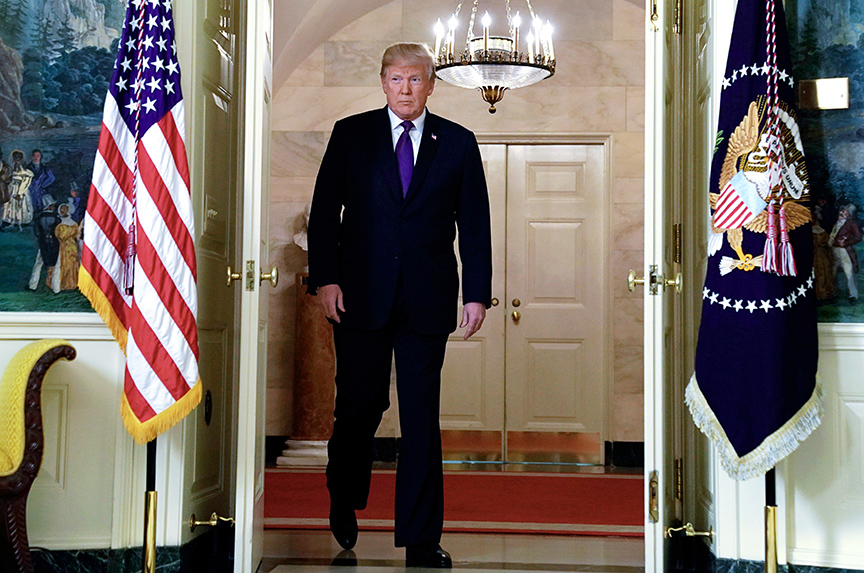 The United States and its European allies have launched strikes against Syria in response to a suspected chemical weapons attack blamed on Bashar al-Assad’s regime.

US President Donald J. Trump announced the strikes on April 13.

In remarks at the White House, Trump said he had “ordered the United States Armed Forces to launch precision strikes on targets associated with the chemical weapons capabilities of Syrian dictator Bashar al-Assad.”

Trump, who earlier this month talked about getting US troops out of Syria, said: “We are prepared to sustain this response until the Syrian regime stops its use of prohibited chemical agents.”

The president said the strikes were aimed at preventing the use of chemical weapons, which he described as “a vital national security interest of the United States.”

France and the United Kingdom joined the United States in the military action. Germany refused to participate.

The strikes were a response to a suspected chemical weapons attack in the Damascus suburb of Douma that killed seventy people and injured five hundred others on April 7. The World Health Organization said forty-three of the deaths were “related to symptoms consistent with exposure to highly toxic chemicals.”

Western officials have spent the better part of the week building the case for retaliatory strikes on Syria.

US officials said they had intelligence to implicate the Assad regime in the attack on Douma.

British Prime Minister Theresa May convened a special cabinet meeting in London on April 12 to discuss how to respond to the suspected chemical weapons attack. The British cabinet agreed that it was “highly likely” that the Assad regime was behind the attack in Douma, a Downing Street spokesperson said.

French President Emmanuel Macron said in a TV interview on April 12 that he has “proof” that the Assad regime used chemical weapons, “at least chlorine,” in the April 7 attack.

After first denying that a chemical weapons attack had taken place, Russia later said the incident had been fabricated.

Trump had a pointed message for Russia and Iran, which support the Assad regime.

“To Iran, and to Russia, I ask: What kind of a nation wants to be associated with the mass murder of innocent men, women, and children?” he said.

“The nations of the world can be judged by the friends they keep. No nation can succeed in the long run by promoting rogue states, brutal tyrants, and murderous dictators,” he added.

The strikes come a little over a year since Trump last ordered military action against Syria following a separate chemical weapons attack. On April 7, 2017, US Tomahawk missiles struck Al Shayrat air base where the US intelligence community concluded chemical weapons were stored and loaded onto aircraft used in the attack.

Shortly after Trump’s remarks, speaking with Mattis at a late-night press conference on April 13, Gen. Joseph Dunford, the chairman of the Joint Chiefs of Staff, said: “This wave of airstrikes is over.”

Atlantic Council experts shared their analysis on the latest developments. This is what they had to say:

Barry Pavel, senior vice president, Arnold Kanter chair, and director of the Scowcroft Center for Strategy and Security at the Atlantic Council.

“If initial reports are confirmed, this series of punitive strikes on chemical weapons assets in Syria by US, UK, and French forces already is more substantial than the one launched roughly a year ago by the Trump administration.  The United States is trying to re-establish deterrence of chemical weapons use by the Assad regime, a very important goal with global ramifications.

“There are risks and dangers, including inadvertent escalation with Iran and Russia; spreading chemical agents and endangering additional innocent civilians by the US munitions attacks; and a protracted operation that inadvertently drags the United States much more deeply into the Syrian conflict.

“That said, from what we know now and at this point, it appears to be a well-structured, well-designed operation to achieve clear, focused objectives.”

“The two most important variables before this kicked off were: What would be hit? And what would Russia and Iran do in response? Although the president claimed that only chemical weapons-related sites would be targeted, it is possible that broader targets were hit including a Republican Guard base.

“The truth is we don’t know yet, but we do know the operation is finished for now, and that it was indeed what most of us expected: A narrow action done for narrow purposes, punishing and deterring the use of chemical weapons.

“We also know there was no unintended escalation with Russian or Iranian forces. Will this deter Assad from using chemical weapons again? Possibly, not least because he’s essentially won the war anyway. Will it change anything else? For better or worse, no.”

“The language the president used is narrowly linked to the use of chemical weapons, which indicates that the intent is to punish Assad for their use, but also to signal that the regime is not the target, which also indicates a desire to control escalation.”

Matthew Kroenig, deputy director for strategy in the Scowcroft Center for Strategy and Security.

“Tonight, President Trump announced that the United States, Britain, and France would conduct punitive strikes against Syria until Assad stops using chemical weapons. By acting in close concert with our democratic allies, and by increasing the intensity of the strikes, this action will reinforce the taboo against chemical weapons use and strengthen US global leadership.”

“Punitive strikes against Syria in order to punish the Assad regime and their allies Russia and Iran, as well as to reinstate the taboo against using chemical weapons, are significant in and of themselves. What would be even better would be using the threat of military force and economic sanctions to bring Syria, Russia, Iran to compromise at the negotiating table. It is high time for a Contact Group with a Dayton-like peace plan, backed by real deterrence.”

Image: “We are prepared to sustain this response until the Syrian regime stops its use of prohibited chemical agents,” US President Donald J. Trump said in remarks at the White House on April 13. (Reuters/Yuri Gripas)