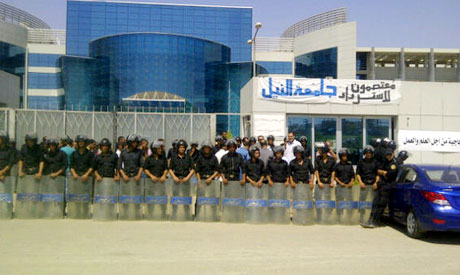 The round-the-clock killing of U.S. military advisers by Afghan soldiers they are training coupled with some $200 million worth of jet fighters and attack helicopters destroyed in a heavily fortified allied base in Afghanistan by Taliban guerrillas disguised in U.S. military uniforms are the latest reminders that 11 years of fighting have strengthened rather than weakened the Islamist enemy.

With more than 70 percent of the American people polled saying they are against the Afghan war as well as prolonging it to the end of 2014, the time to reassess the NATO commitment — originally made to punish al-Qaida and chase it out of Afghanistan, not to wet-nurse a feudal society into democracy — is past overdue.

The killing of the U.S. ambassador to Libya and three Americans in charge of protecting him, followed by anti-U.S. demonstrations more than one-third of the way round the planet, from Southeast and South Asia to the Middle East and North Africa, triggered a barrage of unhelpful cliches in the U.S. presidential campaign.

Clearly, it was not an amateurish 15-minute YouTube posting that portrayed the Prophet Muhammad as a depraved alcoholic that triggered the geopolitical earthquake. Al-Qaida networks, deemed defunct by some U.S. experts, are alive and ready to kick in when the opportunity arises.

The Syrian civil war — also known as the uprising — started March 15, 2011. Al-Qaida elements, based in Iraq, came in to what is now a civil war against the regime of Bashar Assad. Qatar and Saudi Arabia are supplying arms and funds to rebel forces. Toll thus far: an estimated 25,000 killed. That’s also the number his father killed in less than a week in February 1982 to suppress an Islamist rebellion in Hama.

Iran relies heavily on the Assad regime as a transmission belt to its allies, Hezbollah in Lebanon and Hamas in Gaza. Presumably to ensure the survival of this extremist axis the commanding general of Iran’s Revolutionary Guards, Gen. Ali Jafari, announced last weekend at a major news conference that some Iranian special forces were in both Syria and Lebanon.

Fearful that this might provide Israel with a fresh pretext for intervening against Syria, Iranian Foreign Ministry spokesman Ramin Mehmanparast quickly dismissed what Jafari had just said to a worldwide TV audience as “false.”

The close alignment of Republican candidate Mitt Romney with Israeli Prime Minister Binjamin Netanyahu’s tough talk on the forthcoming need to take out Iran’s budding nuclear weapons capability, has rattled Iran’s civilian government. But not the Revolutionary Guards. They have staged maneuvers in the Persian Gulf designed to mine the Strait of Hormuz, the world’s most important oil route.

From Israel, Netanyahu used football analogies on NBC to persuade Democrats and U.S. President Barack Obama that the time to bomb Iran’s nuclear installations is now: “You can’t let them score a touchdown because that would have unbelievable consequences for the peace and security of us all, of the world really.”

The U.S. intelligence community believes Iran is still a year away from being able to produce a nuclear weapon deliverable by missile.

If this week’s global Muslim earthquake is a 5 on the Richter scale, a 9 (10,000 times stronger) is what some geopolitical experts believe would be the global reaction to Israeli air and sea (submarine missiles from the Gulf of Aden) bombing of some of Iran’s nuclear installations.

Some experts are fearful Netanyahu and Defense Minister Ehud Barack may choose the closing stages of the U.S. presidential campaign when Romney would applaud and Obama would also applaud, lest he be tarred with the appeasement brush — and lose the White House to Romney.

This, in turn, would make the United States Public Enemy No. 1 throughout the Arab world.

Acting as a powerful brake on the Israeli leadership is the opinion of three former heads of Israel’s principal intelligence services — Mossad, Shin Bet and military — who have said on the record they are opposed to bombing in the foreseeable future.

Meir Dagan, who retired as Mossad chief in 2011, told CBS News’ “60 Minutes” last Sunday that an attack on Iran would be the “stupidest idea I’ve heard.”

Such an attack “before exploring all other approaches is not the right way how to do it,” said Dagan.

Recent explosions have demonstrated yet again that the Arab world isn’t on a glide path to Western-style democracy.

Another hard to escape conclusion is that the creation of a Palestinian state in the West Bank is more mirage than even distant possibility.

With the $1 trillion geopolitical mistake in Iraq, where Iran today has more influence than the United States, and the $500 billion (thus far) boondoggle in Afghanistan, it is almost too late to heed the advice of George Shultz, a man who has had four different Cabinet posts (including Treasury and State), taught at three of the country’s greatest universities, when he asks in a joint op-ed with four other senior fellows at Stanford University’s Hoover Institution (all former heads of major policy positions in Washington), in The Wall Street Journal:

The five musketeers said U.S. problems “are close to being unmanageable now. If we stay on the current path, they will wind up being completely unmanageable, culminating in an unwelcome explosion and crisis.” Q.E.D.